With his pared-down showcase for emerging and established shooters, photographer Platon is redefining the aesthetic of online magazines. 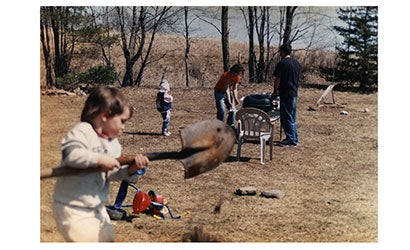 As magazines have increasingly taken to the Web, they have trended toward busier pages, slicker navigation, and unnecessary bells and whistles. But when photographer Platon designed his new online magazine, he knew he wanted nothing to do with all that.

“The aesthetic is a reaction against the Internet,” says the half-Greek Brit known for celebrity portraiture. “It’s not slick, and it’s not trying to impress everyone with perfectly aligned Helvetica bold caps.”

Nutopia magazine, which launched at nutopiaforum.com in October, is named after a creative collective for young photographers Platon has been organizing for the past few years. The forum is a safe environment for this small group of up-and-coming photographers to get feedback on their work and learn the history and trends of the photo industry — a conscious revival of the 17th-century French salon.

A devout anti-establishmentarian, Platon took the forum’s name from the imaginary egalitarian country of Nutopia, established in the liner notes of John Lennon’s Mind Games album. That ideology carries over to the magazine, where he plans to show three photographers’ work each issue without comment or hierarchy, sometimes placing his own work or that of top professionals alongside the forum’s rising stars.

“It shouldn’t matter if you’ve got someone who is established showing side by side with a student or assistant,” Platon says. “It’s refreshing because it’s no longer about the name, it’s all about the work.”

Even the magazine’s aesthetics are a subtle jab at the watch-your-back photography industry. Its “humble approach” to design includes a different hand-drawn logo and style for each issue, often employing stenciling, paper cutouts, and graffiti techniques. Each clean page displays only a single image and is navigated by forward, back, and home buttons torn from paper Platon found in the street.

“It’s made from things that have been discarded, which is sort of a metaphor for how the industry relates to up-and-coming photographers,” Platon explains. “Everything is discarded and overlooked unless you have a huge budget.”

Platon hopes his magazine can counteract that mentality, providing both established and emerging photographers with a venue that highlights passionate work without getting bogged down by click-through rates and pay scales.

“If I can open some doors for people who can then reinvest their energy, instead of having to beg on their hands and knees [to get more exposure], then all of that energy can go back into creativity,” he says.