With magnification up to 20X, these cameras can make tiny, far-off subjects fill the frame -- but as Casio's Exilim EX-F1 shows, they have other special talents. 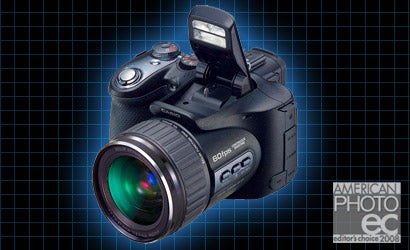 The photo industry likes to call these cameras “high zooms,” a reference to their exceptional magnifying power. We think “superzooms” is more descriptive, but either way their focal-length ranges of 10X, 12X, 15X, or even a staggering 20X make them just the ticket for shooting sports and wildlife (or even celebrities) if you don’t want to carry a massive, expensive supertele and digital SLR. In the past these cameras have usually incorporated an electronic viewfinder (EVF), which allows steadier handheld shooting than composing with an LCD screen, especially when the lens is zoomed out to long tele. But a number of manufacturers are foregoing the EVF to keep cameras compact and leave space for a bigger screen. Fortunately, most of these models now have optical image stabilization to minimize blur due to hand shake — and make your pictures sharper.

For photographers who’ve grown blasé about fast firing rates, Casio’s new Exilim F1 is the ultimate antidote. It can rip 60 still frames at full resolution — a respectable six megapixels — in a single one-second burst. But our jaws really hit the floor when we set this paradigm-shifting model to its highest-speed video mode, in which it delivers a hard-to-believe 1200 frames per second. Played back at standard speed, the latter stretches one second of real time into 40 seconds of super slo-mo. Cracking an egg into a pan takes nearly a minute. (Visit our Sneak Peek for a demo.)

Need more subject-stopping speed? The EX-F1’s electronic shutter can shoot stills at 1/40,000 second. And its built-in flash recycles fast enough for you to fire seven full-resolution frames per second in bursts of up to 20 shots. Not fast enough? The F1 can even take a picture in the future, sort of: Its image buffer stores whatever the lens sees in the second before the shutter button is pressed, so you can retrieve a full-res image even if you miss the moment.

With its 36-432mm (35mm equivalent) f/2.7-4.6 zoom, the F1 performs these tricks both far and wide. It can even combine them with the manual focus, manual exposure, and RAW capture options that control freaks love. Could this be the hybrid still/video camera we’ve been expecting all these years?

At a Glance: Casio Exilim EX-F1

You can shoot Fujichrome Velvia, Provia, or Astia with the new FinePix S100fs. How’s that? Fuji’s new superzoom evokes those iconic slide films with several film-simulation modes (hence the “fs” designation) that apply appropriate saturation, hue, and contrast to JPEG images. You can even autobracket your film simulation, capturing the same moment in different film palettes.

For photographers weaned on the moderate contrast and long tonal scale of color negatives — and who prefer not to use the S100fs in its RAW mode to achieve those qualities — there’s even a JPEG portrait mode that simulates color neg. A dynamic-range adjustment lets you expand tonality another 400 percent. (You can even autobracket by dynamic range.) The new model’s all-things-to-all-photographers effort continues with such amenities as a Super Macro mode that allows focus down to one centimeter in front of the lens; face detection that can automatically apply red-eye removal; and VGA-resolution video. And if you run out of existing light but can’t use flash, you can shoot three-megapixel images at ISO 10000.

At a Glance: Fujifilm FinePix S100fs

It’s a good thing the EasyShare Z8612 IS has image stabilization to steady your shots, not only because of its powerful but shake-prone 12X top magnification but also because you have to compose at arm’s length on its LCD screen. (It has no eye-level viewfinder.) The new model sure is a superzoom, though, with its Schneider-branded 36-432mm (35mm equivalent) lens, respectably fast at f/2.8-f/4.8. And this optical reach comes in a camera no bigger than some standard 5X-zooming compacts. In fact, the Z8612 fits in a jacket pocket.

The new EasyShare can choose an exposure mode for you using its Smart Scene capability, but you can pick an auto mode yourself if you prefer, or go fully manual. The camera will shoot stills in high-def, wide-screen format and display them on an HDTV when you connect it with Kodak’s EasyShare HDTV Dock. (Video is standard VGA.) Or drop the camera into the optional EasyShare Printer Dock and make 4 x 6 prints on the spot: Press a button and it does the rest.

At a Glance: Kodak EasyShare Z8612 IS

The league leader in superzoom magnification, this new 10-megapixel model posts the biggest numbers yet, ranging from an extrawide 26mm to a breathtaking 520mm — real optical zoom, not pixel-stealing digital zoom. Despite that huge magnification, the lens is relatively fast, with a maximum aperture of f/2.8-4.5. Features for knowledgeable photographers include manual exposure, RAW image capture, a dedicated flash hotshoe, and wireless control of Olympus accessory flash units. There’s even an underwater mode for when you’re shooting the depths with the SP-570 in its dedicated underwater housing (which Olympus also sells).

Perfect Shot Preview shows the effect of changing various settings before you take a picture; Perfect Fix lets you correct poor exposures, blur, and red-eye after you take the picture; and Shadow Adjustment can boost dynamic range, also after the fact. The camera’s advanced technology also addresses snapshot basics, offering Smile Shot — a refinement of face detection in which the camera automatically fires at the instant someone in the frame smiles.

Panasonic’s fifth-generation Travel Zoom (that’s what the TZ stands for) gets a resolution boost to 9.1 megapixels, a sharper LCD (one with 460,000 dots, twice that of typical screens), and several advances in automated shooting. Among the latter is Intelligent ISO, which Panasonic says analyzes 3,000 “cells” throughout the picture and-get this-adjusts the ISO in each cell for better exposure and dynamic range. The system also analyzes motion and will automatically raise overall ISO as needed to minimize blur.

Most point-and-shoot models have an image aspect ratio of 4:3, but the TZ5 lets you choose from 4:3, 35mm-style 3:2, and wide-screen 16:9. The TZ5 also adds 720p high-def video capture, in wide-screen format; unlike video in many compacts, you can actually zoom while you’re recording. Good stuff from previous TZ models is also carried over, notably the wider-than-usual 28-280mm f/3.3-4.9 Leica-branded lens, a clipboard memory for storing files such as street maps, and in-lens image stabilization.

At a Glance: Panasonic Lumix TZ5

Nikon came late to the superzoom party but makes up for it with the Coolpix P80. Featuring a compact body that bears a family resemblance to Nikon’s D40x digital SLR, this 10.1-megapixel camera has a 27-486mm (equivalent) zoom lens that’s relatively fast (f/2.8-4.5); a slew of exposure modes that include full manual; and speed, speed, speed. Downsize the image to three megapixels and you can fire up to 30 shots at four, six, or thirteen frames per second. What’s more, the P80 can capture color and monochrome JPEGs simultaneously.

Viewing and composing can be done either through the electronic viewfinder or on the camera’s 2.7-inch LCD screen. The P80 steadies its image by shifting the sensor, a departure from Nikon’s usual lens-based Vibration Reduction. But traditional Nikon goodies include Best Shot mode, which takes multiple images and keeps the sharpest one; in-camera red-eye removal; and D-Lighting for opening up an image’s dynamic range.

At a Glance: Nikon Coolpix P80

Sony’s new model tweaks the Cyber-shot DSC-H9, one of last year’s Editor’s Choice superzooms and already one of the best EVF cameras around. The new rig gets an extra million pixels of resolution, for a total of nine; user-selectable noise reduction (low, standard, or high); an improved Dynamic Range Optimizer that has a new Plus mode for a greater boost in shadow detail; and autoexposure bracketing that automatically adjusts white balance and color in between frames to better suit the different exposures.

The H50 takes smile-detection shutter priority a step further, allowing you to set it so that the shutter is triggered by either a child’s or an adult’s smile. Otherwise, Sony smartly kept the H9’s virtues intact: the wide-to-supertele 31-465mm (35mm equivalent) f/2.7-4.5 Zeiss lens; the big, tilting LCD that lets you view and shoot with the camera at waist level or overhead; and HD output for 1080i viewing of stills on a high-definition TV.

At a Glance: Sony Cyber-shot DSC-H50