Embrace bad weather for fantastic photos you can't get anywhere under the sun. 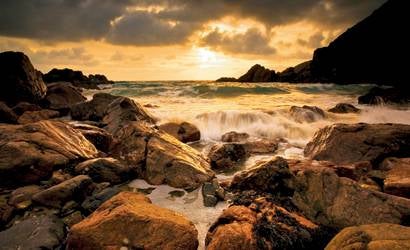 Mike Brehaut isn’t like the rest of us. He prefers the beach in winter rather than summer. He loves big, ugly clouds. Even rain is okay by him. And he’s willing to get out of bed very, very early.

But Brehaut’s offbeat tastes lead to images like the one shown here and on his website, mbpixel.com. Impressive for any photographer. For someone who’s been at it seriously for just 18 months? Awesome.

Brehaut is someone worth listening to. “My favorite time for shooting is autumn and winter,” says this 36-year-old, who works in the finance industry. “There are far fewer people around, meaning more chances of empty beaches.”

He also likes the quality of winter light. “As the earth tilts away from the sun, the light has farther to travel through the atmosphere, giving the sunrise and sunsets more vivid color.”

Brehaut certainly knows about sunrises and sunsets. He photographs them year-round on his home island of Guernsey. This 24-square-mile dot in the English Channel may be compact, but it’s well rounded with landscape subjects from sandy beaches to sheer cliffs. And since it’s an island, Brehaut can shoot the sun both rising and setting over water.

Sunsets are easy: He arrives about an hour and half in advance to scout locations and work on compositions. Sunrises are tougher.

“Summer landscapes mean very early mornings, maybe 4 a.m.,” he says. “But with the sun rising far later in winter, I can get up at 6 a.m.”

Since he’ll be arriving in the dark, Brehaut figures out in advance where and what to shoot. The night before, he checks the weather, hoping for clouds: “Never be put off by the weather. The worst weather can produce the most dramatic images.”

When you consider how distant the horizon can be in a seascape, it’s often not your hometown meteorology that’s most important.

“The weather 40 or 50 miles away is more likely to affect your image,” he says. “The setting sun can light up the clouds above from a break in the clouds many miles away.”

The composition, however, isn’t left to chance. “I try to have a point of interest. Maybe a lighthouse, castle, or large rock,” he says. “Then I look for any leading lines. Left to right is best, since that’s the way we read. I also try to include foreground interest, a rock or some seaweed. I think of it as a story, with a beginning, middle, and end.”

The story line of a Brehaut sea-scape is produced in-camera. His favorite tool? A graduated neutral-density filter. Like most landscape photographers, he uses it to balance the exposure by toning down a bright sky. He also packs a cable release for his tripod-mounted Canon EOS 5D and 17-40mm f/4L Canon lens.

“I always enable mirror lockup for the sharpest shots possible,” he says. “The first press of the cable release locks the mirror up. Then I wait a few seconds and another press takes the exposure.”

What’s the exposure? “I frequently use long shutter speeds to give the seawater some movement,” he says. “A half to 1 second gives a good surge to the advancing or receding sea. But as the sun sets, I regularly use up to 2 minutes to give the sea a more misty or spooky look.”

Postcapture, Brehaut is a fan of Adobe Photoshop Lightroom, as he prefers to merely tweak rather than manipulate his photos. “If an image needs a lot of work,” he says, “it makes more sense to delete it and spend the time out in the field looking for a better shot.”