Take your shooting to a new level-- sea level. Just slide into a kayak. 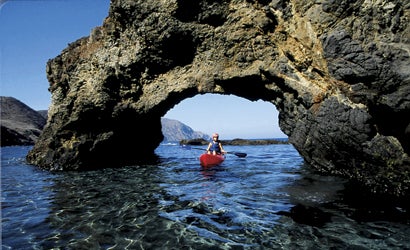 If you’ve limited your nature photography to only where hiking boots can take you, you’ve been missing some amazing photo ops. Just ask Chuck Graham.

This 43-year-old from Carpinteria, CA, gets up close and photographic with otherwise hard-to-reach creatures and settings around the Santa Barbara coast by shooting from a kayak. It helps that, in addition to working as a writer and photographer, Graham is a lifeguard and kayak guide at Channel Islands National Park. But even for the weekend paddler, it’s easy to turn a kayak into a wonderful shooting platform.

“There’s nothing like being on the water at dawn, enjoying the solitude,” says Graham. “And you get unique, eye-level perspectives for landscapes, seascapes, and wildlife.”

Of course, most photographers also would point out that there probably isn’t a better way to destroy your gear than taking it to sea. Graham’s experience, however, doesn’t support that notion.

“I lost a camera and lens once when a wave knocked me out of my kayak in the middle of the Santa Barbara Channel,” he says. “But that was seven years ago, and I’ve been very fortunate not to lose anything since.”

Graham stores his gear in clear drybags. (“That way I can see what I want to grab.”) And he suggests being very particular about the kayak you use. “There are lots of beginner-friendly kayaks,” he says. “So choose a wide, sit-on-top model that’s at least 10 to 12 feet long and has a thick hull.”

His personal favorite, the Dolphin by Necky Kayaks , is no longer in production. But boats similar to this 14-foot-long, 28-inch-wide polyethylene model sell for under $800. Ocean Kayak specializes in the sit-on type.

Why a sit-on, not a sit-in, kayak? They’re easy to steady. (“Just swing a leg over each side of the boat.”) And they’re flexible. (“You can actually crawl around the boat and shift your weight.”)

But whether you’re in or on the kayak, there’s nothing like it for stealthily approaching wildlife.

Graham has found that kayaks don’t faze California sea lions, elegant terns, brown pelicans, and various wading birds, such as the marbled godwit. Harbor seals, however, are particularly skittish, as are seabirds that come ashore only rarely.

In any case, practice paddling with low, methodical, splash-free strokes. And get used to switching smoothly from paddle to camera and back; you don’t want your movements to, well, ruffle any feathers.

Though some kayak-shooters use stubby monopods, Graham prefers the spontaneity of handholding. “If you’re comfortable moving around your kayak,” he says, “you can prop your elbows up on the sides of the boat for those precious eye-level shots of wildlife.”

A. Ed Stratmann, an expert on film conservation and restoration at the George Eastman House International Museum of Photography and Film in Rochester, NY, provided the names of several outfits worth investigating: Cineric, Inc. in New York; ColorLab in New York and Maryland; in Los Angeles, Film Technology Company and Triage Motion Picture Services.