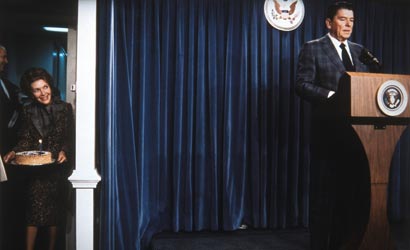 Moments in Time: Photos and Stories from One of America’s Top Photojournalists
By Dirck Halstead
Harry N. Abrams
$35

If it’s true that, as Peter Howe writes in the introduction to Moments in Time, “The average photojournalist, if there is such an animal, gets to go to more places, meet more people, and experience more things than one could reasonably expect to force into three or four lifetimes,” then Dirck Halstead has probably crammed about six lifetimes into his career (which isn’t over yet). Moments, a collection of the best of Halstead’s work, begins with shots of the Guatamala City riots that followed the CIA-led overthrow of Jacobo Arbenz in 1954 — captured by the photographer after scheming his way into an unrelated Life assignment in the country, and making him, at age 17, the youngest war photographer the magazine has ever had.

For some photographers, a story like this would be their most memorable. For Halstead, it was just the first in a series of stories, and the photographs that follow in the 350-page book seem to encompass the whole of recent American history. From shooting for UPI on the front lines of Vietnam to covering the White House for Time over a duration of 30 years, Halstead’s personal memories read like a series of headlines. Shots of the bombing of Saigon are followed by Nixon with the astronauts of Apollo 11, portraits of Louis Armstrong and behind the scenes of The Factory in New York, and presidential shots from Nixon’s visit to China to the attempted assassination of Reagan, through Clinton’s famed embrace with intern Monica Lewinski. (The latter is one of Halstead’s favorite stories — when the story broke and photographs of Monica began to appear in the papers, Halstead remembered the face from a shoot all the way back in 1996 and uncovered the image. This, when it ran on the cover of Time after Monica had given her testimony, is perhaps the most memorable magazine cover of the 1990s.)

In fact, Time magazine covers abound — Halstead was once featured himself on one, in a story titled “The Cover Guy” — and readers who’ve had subscriptions in the ’80s and ’90s will remember more than a few of these images. The combination of these woven together with Halstead’s reminiscences is the most revealing aspect of what it means to be a photojournalist — these images of American history are Halstead’s own, and he has, more or less, lived history. In bits and pieces through the narrative that accompanies the images, we learn that as his lens moved through the decades, Halstead, on the other side, wasn’t merely shooting. He was running through a hail of gunfire in Guatamala or camping out on the set of Apocalypse Now; dodging explosions in floating restaurants in Saigon or popping Dexamil with Andy Warhol; crying with Gerald Ford as he learned he lost the election, looking down over the South China Sea just hours after the fall of Saigon, or sitting blindfolded in the backseat of an anonymous car en route to Arafat’s secret bunker.

Today, at the age of 70, Halstead is taking it a little bit easier. Rather than globetrotting to shoot wars and riots, he’s off giving video journalism workshops and running the webzine Digital Journalist. But the memories of this living history are no less vivid. As he writes in the preface, “One of the best-kept secrets in journalism is that photographers can be terrific storytellers. They recall memories in colorful, visual terms, and their sense of timing can be unerring. However, you rarely hear them regaling guests at a cocktail party or dinner. The stories are so big, and based on such important events and people, that even talking about them would be in bad taste. But late at night, in a dark bar in a place like Bangkok, Paris, Calcutta, or New York, among their own kind and usually encouraged by a few drinks, the stories start to flow and they are wonderful.”

For those of us who would love to be a fly on the wall at one of those dark bars, Moments in Time is Halstead’s invitation in. Even better — he’s brought pictures.