Back to the Future

Luigi Colani's early-1980s camera designs for Canon were years ahead of their time. 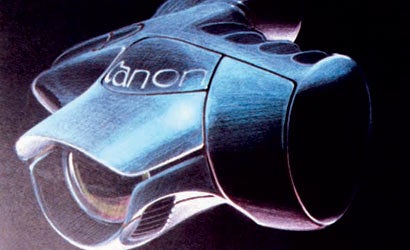 People of a certain age grew up expecting that as adults they would drive antigravity cars and live in geodesic domes. Those people now find themselves wondering what happened to that space-age future. As fast as technology moves — and anyone who follows digital photography knows how fast it does — it rarely keeps up with the visionary notions of science fiction and techno-pundits.

Yet when it comes to photography, that future is here. We’re shooting photographs without film, storing thousands of high-res images in devices smaller than a matchbook, and sending these pictures through thin air in mere seconds. All we’re missing, it seems, is Jetsonian camera design. Or are we?

The truth is that many of today’s digital compact cameras bear a strong resemblance to “concept” designs created for Canon in the early 1980s by German industrial designer Luigi Colani. Colani’s freehand sketches were somewhat more fanciful, as shown by these stunning examples from Colani: The Art of Shaping the Future (Princeton Architectural Press, $75), an impressively fat survey that includes ideas for everything from watches to skyscrapers. Working closely with Canon’s in-house designers, though, Colani anticipated both the form and the features that would become standard on digital cameras. These include large external display screens; curvy “bio-design” contours; ergonomically placed controls; and even the integration of the camera body with a single, nonremovable lens now found in long-zooming EVF models.

Yet the first real-world application of Colani’s ideas was not in a point-and-shoot camera but rather a 35mm SLR, the vaunted Canon T90. One of the first such models created with computer-aided design, the T90 was introduced in early 1986 as the top of Canon’s T-series 35mm SLR line. Along with its revolutionary styling and integrated film advance it had professional-level construction, features, and control. The T90 was arguably the most influential SLR of our time, and some photographers still consider it the best.

The Canon T90’s achievement was overshadowed by the 1985 introduction of body-integral SLR autofocus in the Minolta Maxxum 7000. But its legacy continues, and Colani’s notion of a camera as an extension of the user’s eye has been enabled and advanced by both automation and digital imaging — technologies that free cameras from previous mechanical, electronic, optical, and physical limitations. In the year 2006 we may not be flying around with personal jetpacks, but for those of us weaned on the space age the cameras we once only dreamed of are a virtual reality.