View all of this year's film and digital winners! 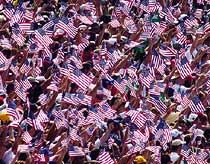 We’ve said it before, but we continue to be astonished by the technical and aesthetic excellence of the images submitted by our readers, and that makes choosing a few score of the best ones to display in this Contest Issue a daunting task. Of course, the sheer number of entries in the Annual International Picture Contest-over 67,000 this time, up from 63,000-has something to do with it too. But it’s a labor of love, and a heck of a lot of fun as well as a mountain of work.

This year’s stats are almost as incredible as the pictures themselves, and they tell a lot about where photography is headed. Of the 55 winning pictures, 33 were shot on film, scanned, and output digitally after being minimally computer enhanced (mostly to punch up color, adjust contrast or remove defects, not to add special effects). It is indeed fitting that this stunning example of film-and-digital convergence should be published in the very first issue imprinted with our new logo, POPULAR PHOTOGRAPHY & IMAGING. Though the 35mm SLR continues to be the camera of choice for most entrants, nine winning images were taken with digital cameras and three with film-based, medium-format rigs. Out of the 55 winners, 10 images are black-and white (though some of these were enhanced and printed out digitally).

We have one married couple among this year’s winners-Joe and Janice Tobolski, of East Aurora, New York, who tied the knot 18 years ago. Remarkably, these were their first submissions to POP PHOTO. The Consistency Award goes to Fred LaBounty of Harker Heights, Texas, who’s copped an Honorable Mention for four years in a row. “Is that a record for bridesmaids?” he asked, but he assured us, “Seriously, I’m flattered.” Bernie Kessler of Yorktown Heights, New York, wins the Humongous Hiatus award hands down. He took second prize this year in the Animals category and his work was last published in POP PHOTO over 50 years ago!

On the geographic front, this year’s winners hail from 19 states, with California and New York in the lead, tied at nine winners each, followed by Washington, Florida, and Texas. Foreign countries represented in the winners’ circle include China, Malaysia, Canada, Italy, India, Argentina, Colombia, and Brazil. Most Foreign Entries Award goes to China, by a country mile. Winningest foreigner: Malaysia’s Sam Kien Hock Lim, who’s represented by three out of the six images he submitted. We do not look at the names when choosing winners, and that’s why the same photographer can be featured more than once.

A notable percentage of submitted images-including our Grand Prize winner-were taken in response to the tragic events of 9/11/01 and its aftermath. These included many images of the World Trade Center, the attack itself, and American flags in profusion in a variety of contexts. In this portfolio of winning images, you will see some of the best of our readers’ work as they photographed our country under attack and revealed how our lives have been transformed since.

Our heartfelt thanks to all those readers who participated in this contest. But even if you didn’t, we know you will enjoy seeing these great images taken by your fellow readers. We hope they will inspire you to enter next year’s Annual International Picture Contest (which will be announced in the April-June 2003 issues). And now…on to the great picture show. -Jason Schneider