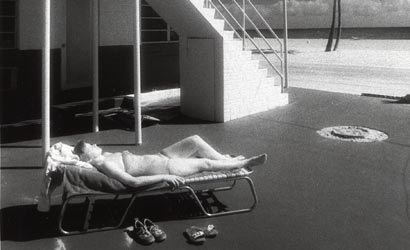 Digital is the earnest child of photography, always striving to better itself. Film is the adult, having had more than a century to mature. That’s why there are times when film — and only film — is the best insurance that you’ll get the result you want. Here are five arguments in its favor.

1) ULTIMATE IMAGE SHARPNESS
For most purposes, digital will do. But unless you’re shooting with an ultra high-resolution digital back or top pro-level DSLR, film still produces the sharpest possible images. A 35mm frame converted to a digital file by today’s desktop scanners simply clobbers the sharpness of a typical consumer DSLR.

Yes, you can sharpen a digital image in software. And with most DSLRs you must, because images are considerably softened by anti-aliasing filters that keep their sensors from recording jagged edges and moiré patterns. Yet if you overdo your sharpening, the image can take on a distractingly “crispy” appearance. The sharpness you get from film is more natural looking.

2) A SPECIFIC “LOOK”
Films have personality; DSLRs don’t. While many DSLRs let you dial in higher or lower saturation and contrast, those crude adjustments can’t compare to the richness of film, whether Velvia’s crisp, saturated look or the delicate tonal shoulder of Tri-X. (Black-and-white is a particular challenge for digital, especially in-camera.)

You can always mess with curves and other factors once you get a digitally captured image into editing software. There are even programs that mimic the qualities of specific films. Whether they succeed is a judgment call, but you won’t get the inimitable look of Kodachrome out of the box.

3) WIDEST TONAL RANGE
Digital SLRs are dynamically challenged. In contrasty light they have a hell of a time with highlight and shadow detail. Sure, they’ve improved, and RAW helps. But they have far to go before they match a color negative’s ability to lasso photons high and low.

Film can be manipulated to soak up even more of a scene’s tonal extremes. You can rein in highlights by “pulling,” or shortening, the development of b&w film. You compensate for this by adding exposure when shooting, improving shadow detail. You can overexpose color negative film by as much as four stops to increase shadow detail and reduce contrast, without damaging highlight nuances.

Again, some super-duper digital backs claim to match or exceed the range captured by film. If you can afford them, go for it — and bring along your laptop.

4) ON A FIXED BUDGET
At a given level of quality, film is still less costly than digital. On the low end, a single-use camera loaded with color negative film costs under $10; the cheapest digital point-and-shoots run nearly $100.

5) WIDEST ANGLE OF VIEW WITH YOUR EXISTING LENSES
True, camera makers have created some excellent wide-angle zooms, and even fisheyes, for their digital SLRs. These lenses offset the smaller-than-35mm image sensor found in all but a couple of DSLRs. But many photographers choose the same brand of DSLR that they used for 35mm because they can shoot with their existing lenses. The problem is that the DSLR’s smaller image sensor puts horse blinkers on those lenses, wasting much of their available image circle.

For example, the nearly 75-degree angle of view produced on the full 35mm frame by a 24mm wide-angle (maybe my all-time favorite 35mm focal length) narrows to just over 50 degrees — in effect, a 36mm or 38mm lens — when you put that same lens on a DSLR with an APS-C-sized image sensor (Nikons, Pentaxes, the Sony, and most Canons).

So if you want the full goodness of a made-for-35mm lens’ angle of view, put it on your aging Canon EOS A2E instead of your Digital Rebel XT, or even your old Nikon F3 instead of your spanking-new Nikon D200.