Dustin Snipes shoots a clever portrait of an NBA star

This action shot plays with the sunlight, literally. 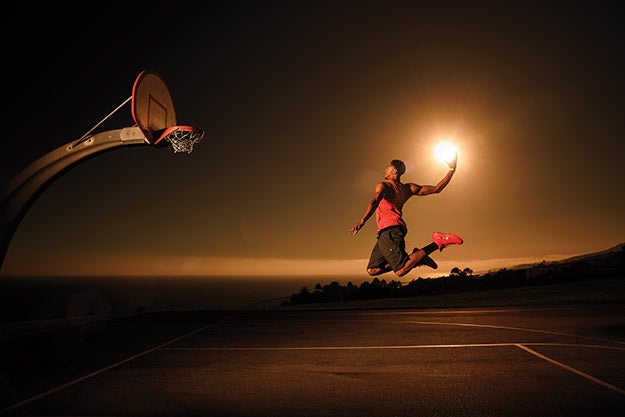 “To light this shot of NBA superstar Anthony Davis appearing to dunk the sun, I had to use almost every tool in my arsenal,” says Los Angeles-based sports pro Dustin Snipes. “It was definitely one of the most technically challenging shoots, especially from a lighting standpoint, that I’ve ever done.” He and his client, Red Bull, spent months planning the project.

Why so difficult? Because the magic had to happen in the camera with minimal postproduction digital retouching, a task he had neither the time nor the budget for. As an example of an extremely creative exercise in lighting techniques, his solutions amount to a strobe workshop in a single shot.

His challenges? He had to freeze Davis sharply in mid-air at an exposure that would record the sun at the right size, plus generate enough light to minimize flare from the sun, while still showing detail in both the athlete and the backboard.

First, to make the sun appear the right size, his assistant held a basketball on set in preshoot testing and Snipes adjusted the lighting until the sun matched the ball in size from the camera’s perspective. During those preshoot tests, his team also mapped out to the inch where the athlete, lights, and camera needed to be positioned.

Sizing the sun led to its own problem: “To reproduce it at a small enough size that Anthony Davis could appear to be holding it, we had to throw enough light at him that we could seriously underexpose the background,” says Snipes. “I knew if we doubled up a whole bunch of lights we could over power the ambient light and that’s what we did.” He used five Broncolor strobes running off of four powerpacks, configured as a single, very bright front light source.

The flash bursts had to be ultra short. “If your strobes’ flash durations aren’t fast enough, you can get a ghosting effect. You’ll freeze part of the player, but other parts of him will show a blurred trail behind him called ghosting,” Snipes explains. “I lit with Broncolor Scoro and Move packs because they have relatively short flash durations.” At his power setting, the durations were about 1/4000 sec, fast enough to freeze his entire moving subject.

Because Snipes had to position his lights off-court, their output had to travel relatively far to reach his subject. “I got the throw from my Broncolor P45 and P65 reflectors. These really hard reflectors delivered every Watt second of light that my Broncolor power packs could produce,” says the photographer.

All of this light on the scene led to a serious problem of its own: overexposure. Shooting with a DSLR whose maximum flash sync speed was a relatively slow 1/250 sec, even at his lowest ISO (32) and smallest aperture (f/22), Snipes would have blown out all the detail. So he tamed the exposure with the help of a variable neutral-density filter. Set to about –3 stops, the ND filter helped him balance the lighting between both his subject and the background.

Tiffen Variable Neutral density filter: Blocking between 2 and 8 stops of light, the filter lets you choose an exact degree of neutral density and eliminates the need for multiple ND filters. $145, street, for the 77mm size.