Seven dwarf galaxies, that is. 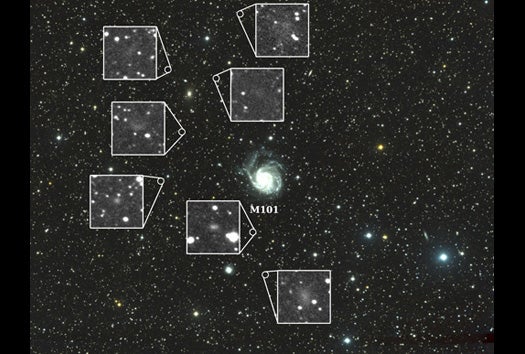 Please join us in welcoming seven new galaxies to the Universe.

Technically, the galaxies have probably existed for billions of years, but these seven had slipped under the radar until now. They’re dwarf galaxies, so-named because they contain only a few billion stars, compared to galaxies such as our own Milky Way, which may contain up to 400 billion stars. Dwarfs are the most abundant galaxies in the universe, but they’re hard to detect because their light is dim and diffuse.

Now Yale astronomers are reporting they’ve overcome this problem by plugging together eight off-the-shelf camera lenses. They used 400mm f /2.8 Canon IS II telephoto lenses, which retail at a whopping $11,500 apiece, but are still a heck of a lot cheaper than other research telescopes, which can cost millions or billions of dollars. By coating the camera lenses in a special nanomaterial, the scientists reduced the scattering of light within the telescope by an order of magnitude, allowing for a sharper image of the stars.

The telescope, named Dragonfly because it looks like an insect’s compound eye, spotted the never-before-seen dwarf galaxies in the very first place it looked, so scientists on the team are hoping there will be lots more to come.

“It may be that these seven galaxies are the tip of the iceberg, and there are thousands of them in the sky that we haven’t detected yet,” said lead author Allison Merritt in a press release.

The new galaxies look like they’re orbiting spiral galaxy M101—it’s typical for dwarf galaxies to get pulled around by a larger galaxy’s gravity. But it may be that the galaxies aren’t associated with M101 at all—that perhaps they’re freewheeling in front of or behind M101. If that turns out to be the case, the findings would add to the latest evidence indicating that there’s a lot that scientists don’t yet understand about dwarf galaxies.

Next, the team will be making observations with the Hubble Space Telescope to try to figure out just what those galaxies are up to.

The paper was published in The Astrophysical Journal Letters in June. A free version of the paper is available on the Arxiv.