Now you can adjust your mobile images with greater finesse 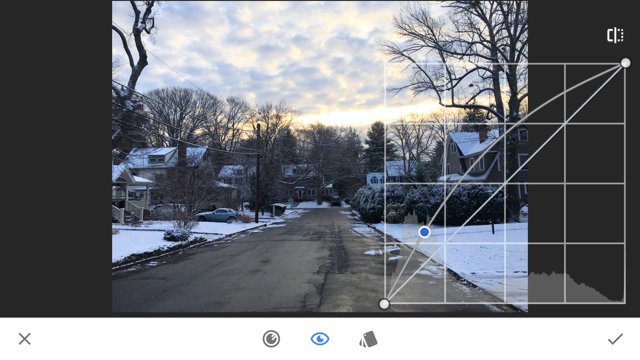 Snapseed, a free image editing app for iOS and Android, just got better with its first update for 2017. Its newly added curves adjustment tool is a simplified version of the method available in sophisticated retouching software to adjust both tone and color in images.

When working with curves, you can choose to adjust the curves for red, green, and blue (RGB) all at once to brighten, darken, or raise and lower contrast. Doing so occasionally adds or removes saturation in a way that’s unpleasant, so it’s extra awesome that Snapseed allows you to adjust the Luminance curve all on its own.

If you choose to adjust the red, green, and blue curves individually, you can raise or lower the amount of each tone in your image. Bringing down the blue, for example, makes the image’s tones appear warmer.

There are plenty of curves presets included in this update. Tap one to apply it; you’ll see the curves adjustments the app makes to create the effects. Once you’ve applied them, you can go into the curves and further fine-tune the presets.