The little camera looks for faces and records short videos. 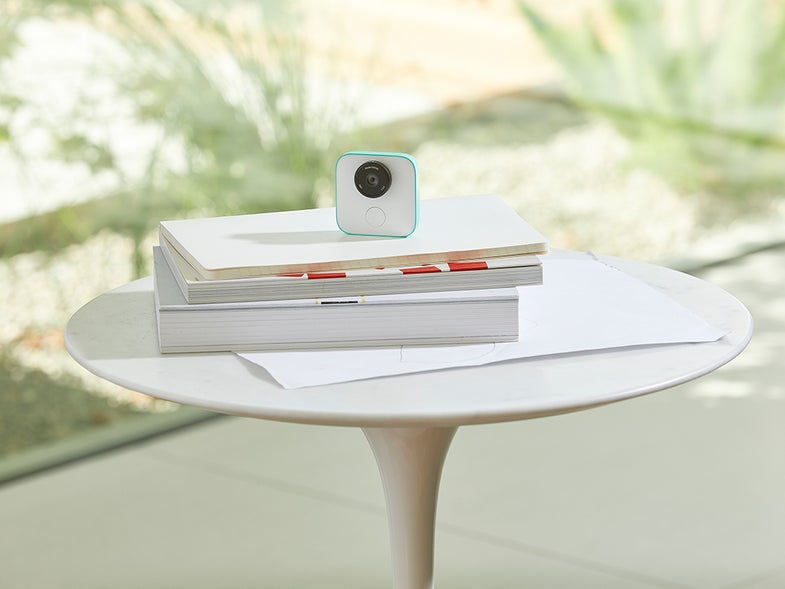 Google’s new camera, called Clips, is a small, intriguing device that feels experimental. It’s a camera, but it has no screen to compose or view images. It comes with a case that has a clip, but it’s not designed to be worn on your clothing. Most interestingly, it uses artificial intelligence to take photography out of your hands so it can capture moments on its own.

Google intends this roughly 2-inch by 2-inch camera to be used by specific audiences—parents or pet-owners—who are interested in capturing a certain kind of scene: the candid moments when a child (or dog) does something cute that may happen too quickly for you to pull out your smartphone and open an app. Another reason for parents to use it is to avoid gathering more shots that feel posed. It’s meant for candids.

If you don’t meet that criteria—if you’re a person with no kids, and no pets, who loves taking pictures with the smartphone in your pocket—this $249 camera is not for you. Or, if you are a parent, but want to completely control your photos and videos the normal way, this camera is not for you, either.

But people who are eager to try to collect candid moments, and who don’t find the idea of an AI-powered camera creepy, may be interested in exploring with this innovative little piece of tech.

Google designed Clips, which they define simply as a “smart camera,” to be used purposefully. A parent could place it at a vantage point they think will be fun, in a room where their kids are playing. It has a three-hour battery life, and a camera lens made out of Gorilla Glass, for toughness. You turn it on by rotating the lens counterclockwise. It has no microphone, so can’t record sound. And it doesn’t stream to the cloud—you only can see what it shoots by wirelessly connecting it with you phone, and reviewing the results there.

It produces tiny little movies, like Apple’s Live Photos feature on iPhones. They are not technically videos; the Clips camera shoots still photos at 15 frames per second to create the segments. Like many smartphones, the Clips camera is 12 megapixels.

Onboard the Clips device, it uses machine learning algorithms to help capture scenes. Those algorithms include face detection, and recognizing familiar people. “It cares the most about faces,” Juston Payne, the device’s product manager at Google, said at a press event. “Once it learns that there’s a face that you see frequently, it’ll try to get nice photos of those faces.”

And they want it to also recognize facial expressions. That involved “training it to know what happiness looks like,” Payne said.

The Google team also trained it to recognize what not to shoot—like when a child’s hand is over the lens, or if it is tossed in a dark purse.

After you’re done using the camera, the only way to see the images it has collected is by connecting the camera with your phone, which you do through its own app, also called Google Clips. In that app, you can save a clip (which sends it to your photo library) or delete it. You can also edit the footage while you’re viewing it in the app, but you have to do that before you save or delete it, otherwise it disappears from the Clips app. In short, the Clips app is a transitory place that just lets you edit, view, and manage those clips. The little moments you view in the Clips app are actually streaming from the camera itself, and not truly saved on your phone until you want them to be.

And all the machine learning is happening on the device itself—the system doesn’t learn what clips you liked, or didn’t like, from your actions in the Clips app. Its packs 16 gigabytes of onboard storage, which Payne says can hold around 1,400 clips.

Were they concerned it could seem creepy? Yes, Payne conceded. But they said that they addressed that by making it obvious what it is. “It looks like a camera,” he said. A blinking light on the front signals that it is on. Besides, unlike a cloud camera meant to monitor your home, this device is not connected to the internet.

Google is serious when they say that this camera is meant for parents and pet-owners. Since I am not a parent, nor do I own pets, I didn’t have a good way to use it as it was intended.

So like any good, childless journalist, I FedExed the camera to my sister, who has, objectively speaking, the two best kids in the world. She used it around her house, and of the clips it captured of my nephews, there is one I especially like of one them chasing the other. Here’s a still from that clip:

I love the photos of my nephews that I have on my phone already that were shot the traditional way, and I love taking more of them, even if they are sometimes posed. So I don’t necessarily need clips shot by a little external camera, but that funny moment is nice to have.

In short, that’s the best way to think of this device: an experimental camera created with one kind of user in mind, best purchased by someone with kids, or a dog they just can’t enough of, and willing to try, just for fun, using an AI-powered camera in a new way—and open to sifting through whatever kinds of clips it produces with its silicon brain.

“This product is only possible because of the way that silicon has advanced,” Payne said, noting that it was only in the past year or so that they could squeeze the technology down into a device this size. Going forward, we’re likely to get more assistance from the artificial intelligence packed into our apps and gadgets.