One is a Leica clone at (likely) a fraction of the cost, the other is a bright budget prime for crop-sensor mirrorless. 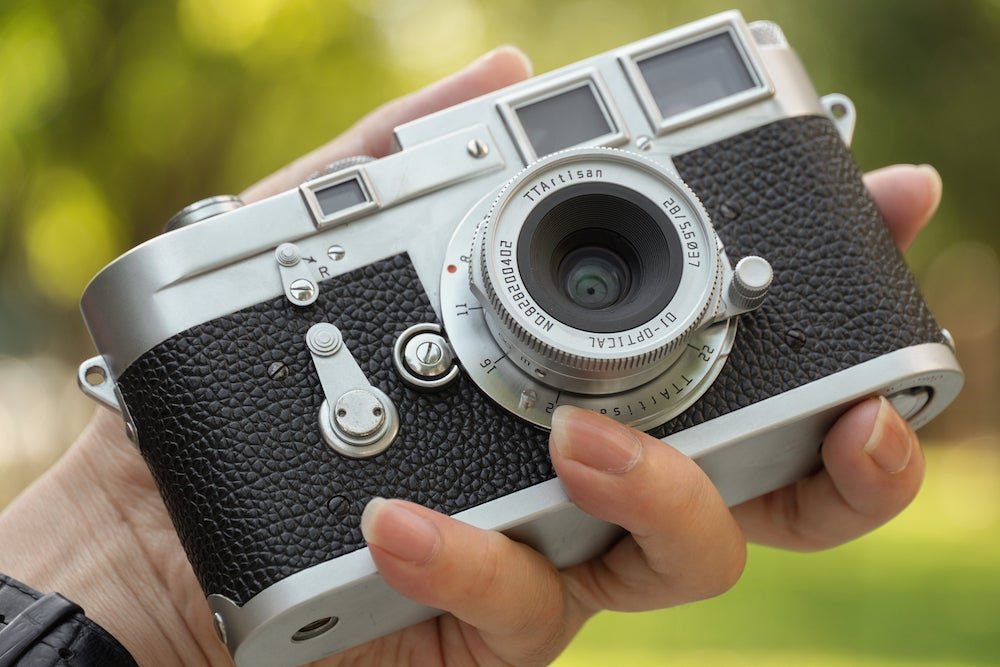 No word yet on pricing for the new TTArtisan M 28mm f/5.6 for Leica. But it's sure to be a bargain in comparison to Leica's own 28mm f/5.6. TTArtisan
SHARE

Shenzhen-based lensmaker TTArtisan has taken the social media wraps off two new lenses that bring its lineup to a total of eight full-frame and six sub-frame optics. The new additions include a lightweight, compact 28mm f/5.6 prime for Leica M-mount and a bright 23mm f/1.4 prime that will be offered in several APS-C mirrorless mounts.

Like the Summaron (whose design dates back to the mid-1950s), the TTArtisan lens is entirely manual in operation. It’s also roughly the same size and weight and shares similar retro stylings. Also like its Leica rival, it should function well as a discreet, wide-angle walkaround optic, perfect for street photography.

It slots into TTArtisan’s M-mount lineup between the TTArtisan 21mm f/1.5 and the 35mm f/1.4 in terms of focal length but is the first with a maximum aperture smaller than F2.8.

The TTArtisan M 28mm f/5.6 has a slightly more complex optical formula than its aged Leica forebear, with a total of seven elements in four groups. Among these, there are two high refractive index elements and one low dispersion element; both should help tame aberrations. By way of comparison, the Leica has six elements in four groups and makes no use of modern glass formulations.

This modern TTArtisan lens uses a six-bladed aperture diaphragm, yielding an aperture range of f/5.6-f/22. By contrast, its much older Leica rival has an eight-bladed aperture. While more blades tend to result in rounder/prettier bokeh, you’ll likely be hard-pressed to notice the difference in real-world shooting. The f/5.6 maximum aperture limits shallow depth of field opportunities. That said, the Leica version may offer more pleasing sunstars when stopped down.

As a fully manual lens, you’ll need to focus it yourself. But again, the generous depth of field offered by the f/5.6 maximum aperture negates the need for precise focus in the first place. The minimum subject distance is 3.3 feet (1.0m). And a focus depth scale on the lens barrel should help users set focus on the fly.

It might not be from Leica but the TTArtisan 28mm appears to offer a solid build quality nonetheless. The body is made from chrome-plated brass and it sports a focus lever similar in design to the original Leica. The lever has an automatic lock at infinity focus that’s released by pressing on it.

Dimensions of both lenses are nearly identical, with a barrel size of 2.0 inches by 0.75 inches (51 x 19mm) for the TTArtisan while the Leica comes in at just a few hundredths of an inch (1mm) shorter with its lens cap removed. The TTArtisan is a good half-ounce (14g) lighter, though, tipping the scales at 5.3 ounces (151g).

Up front, the TTArtisan lens accepts 37mm threaded filters versus the 34mm filters used by the Leica. TTArtisan also includes a removable lens hood in the product bundle.

Pricing or availability for the TTArtisan M 28mm f/5.6 has yet to be announced. Based on the sub-$800 pricing for all of its other M-mount lenses, though, it’s likely to prove vastly more affordable than the Leica Summaron-M 28mm f/5.6.

We can’t yet say for certain which mounts it will be offered in. Though the company’s press materials do show the lens used with Canon EF-M, Fujifilm X, Micro Four Thirds, and Sony E-mount bodies. TTArtisan does also make lenses in Canon RF, Leica L, and Nikon Z mount. And it will be interesting to see if they offer a version of the 23mm f/1.4 in any of those.

Further details, including pricing and availability, have yet to be revealed. However, given that the company’s other APS-C primes retail in the range of $73-$149 before shipping, we can likely expect this lens to be extremely affordable indeed.