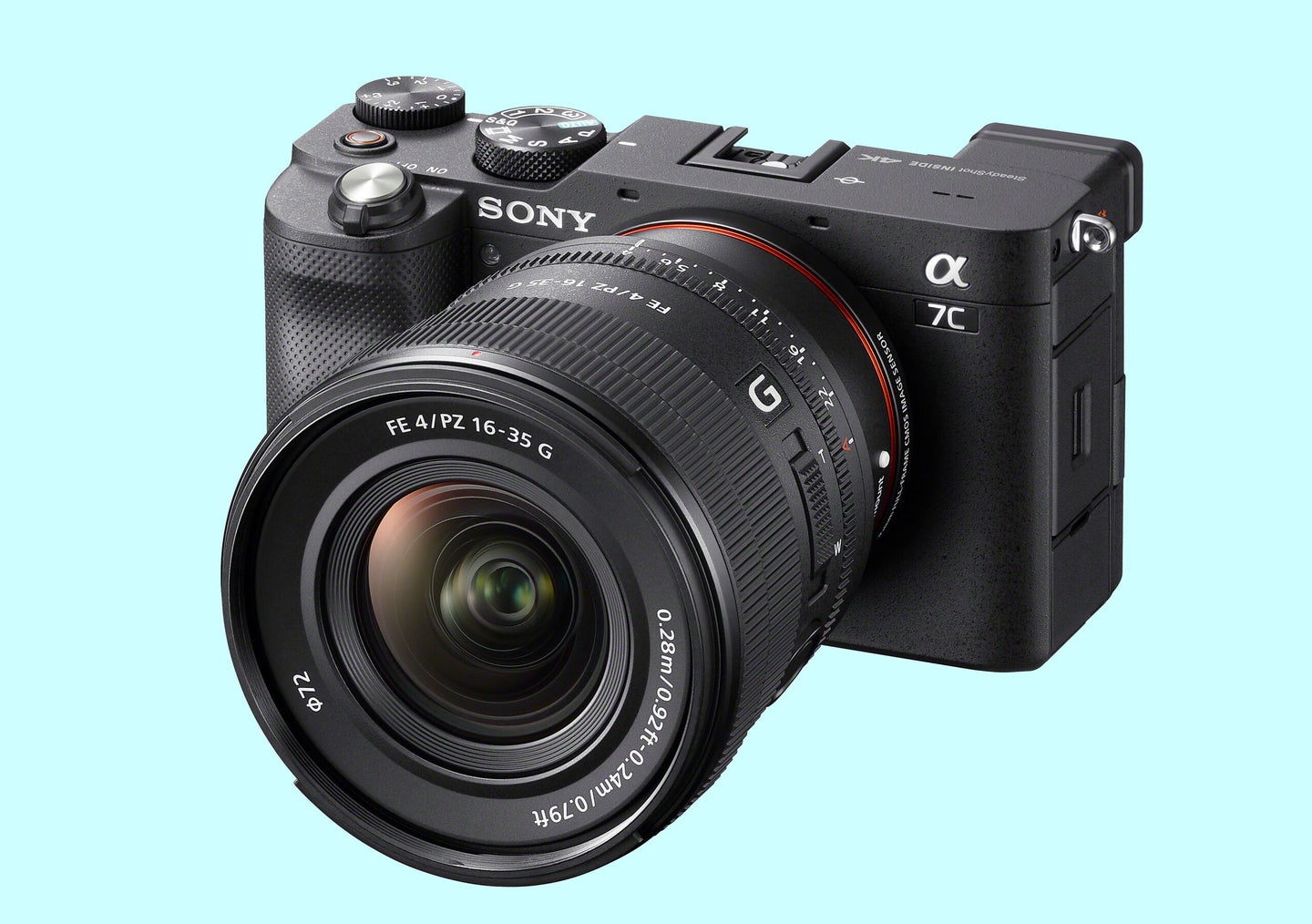 Sony’s lineup of E-mount “power zoom” lenses—those with electronically-powered zoom control—has just grown to six with the arrival of the new Sony FE PZ 16-35mm f/4 G zoom. Shipping this summer, it’s just the second E-mount power zoom to support full-frame bodies, joining the Sony 28-135mm f/4. It’s also the smallest lens of its type from Sony, and the company’s first lens to use XD Linear motors not only for focus control but also for zooming.

First and foremost, the Sony FE PZ 16-35mm f/4 G lens is aimed at videographers and vloggers, as indicated by its video-centric features. These include power zoom capability, a zoom rocker switch on the lens barrel, near-silent autofocusing, a de-clickable aperture ring, and a design that minimizes focus breathing and axial shifts while zooming.

That’s not to say it’s only for video use by any means. Sony’s new 16-35mm f/4 could also make for a handy and compact walk-around zoom for street, travel, and landscape photography—perhaps with some occasional light macro work mixed in too.

Its nearest rival in Sony’s existing lineup is the Zeiss-badged Vario-Tessar T* FE 16–35 mm f/4 ZA OSS, which is not only starting to get long in the tooth but is also bulkier and a bit more expensive than the new optic (though it is stabilized, unlike the PZ model). There’s also the brighter FE 16-35mm f/2.8 GM at double the price. Or should you prefer something else with power zooming capabilities, there’s the Sony FE C 16–35 mm T3.1 G cinema lens at more than 4.5x the price.

The new lens’ optical formula sits somewhere in between its two siblings in terms of complexity, with a total of 13 lens elements in 12 groups. This formula includes two advanced aspherical elements, one conventional aspherical, one Super ED (Extra-low Dispersion), one aspherical ED, and one more ED element for good measure.

Users can focus as close as 11 inches at the wide end and 9.5 inches at the telephoto end for a maximum magnification of 0.23x. If used on an APS-C camera body (or in cropped mode on full-frame), the 16-35mm offers a 24-53mm equivalent focal range, which is still quite useful.

One other area which distinguishes the new 16-35mm f/4 from its Zeiss predecessor is its power zoom control. Four of the lens’ six XD Linear motors are dedicated to zooming. Both the rocker switch on the barrel and the zoom ring offer variable-speed control, allowing users to zoom faster or slower depending on how far they push the rocker, or how fast they turn the ring. For repeatable zoom pulls, there’s a linear response mode.

The lens has no mechanical zoom coupling, so when using the zoom ring, it will continue to rotate even once the stops are reached at either end of the zoom range. And zooming is internal, meaning the lens doesn’t change size as you zoom in or out.

The remaining two XD Linear motors are used for autofocus control, which should be both swift and silent. Sony promises the lens can provide “industry-leading” AF performance with accurate focus control for stills at up to 30 fps and for video at up to 120 fps when shooting with an Alpha 1 body.

The lens also has a fly-by-wire focus ring with no hard stops at either end of its range. And like the zoom ring, there’s a linear response mode for those times when focus repeatability is key.

Unlike both of those lenses, however, the new model has both an aperture ring with an “Auto” position and an aperture mode switch. The latter allows the user to choose whether they want a click-free action for the aperture ring (ideal for video capture) or a click detent for a more intuitive stills photography experience.

There’s also an iris lock switch to prevent you from bumping the lens and shifting from automatic to manual aperture control by mistake.

The Sony FE PZ 16-35mm f/4 G is both noticeably smaller and lighter than its Zeiss Vario-Tessar sibling, something that’s achieved in part by greater use of plastics in its construction.

With a weight of 12.5 ounces and a footprint measuring 3.5 inches long and 3.2 inches in diameter, the new lens is both a third lighter than its predecessor and almost half an inch shorter as well. In fact, Sony describes it as the world’s lightest full-frame, wide-angle, power-zoom lens with a constant f/4 aperture. That’s a lot of qualifiers!

Yet despite its relatively trim dimensions, this lens packs quite a punch. As well as its internally focusing and zooming design, it’s also weather-sealed and absolutely jam-packed with controls.

In addition to the three rings used to control aperture, zoom, and focus—the latter two rings being sized differently to help distinguish them—there are no less than five other controls. These include the aforementioned aperture click and iris lock controls, as well as a focus mode switch, the zoom rocker control, and a customizable button that defaults to “focus hold.”

Up front, you’ll find both 72mm filter threads and a fluorine coating to prevent dust, moisture, and accidental smudges from adhering. A petal-style bayonet lens hood is also included in the product bundle.