Apple's powerful new desktop workstation makes use of the brand's latest chipsets. You can preorder the Mac Studioand the Studio Display right now. 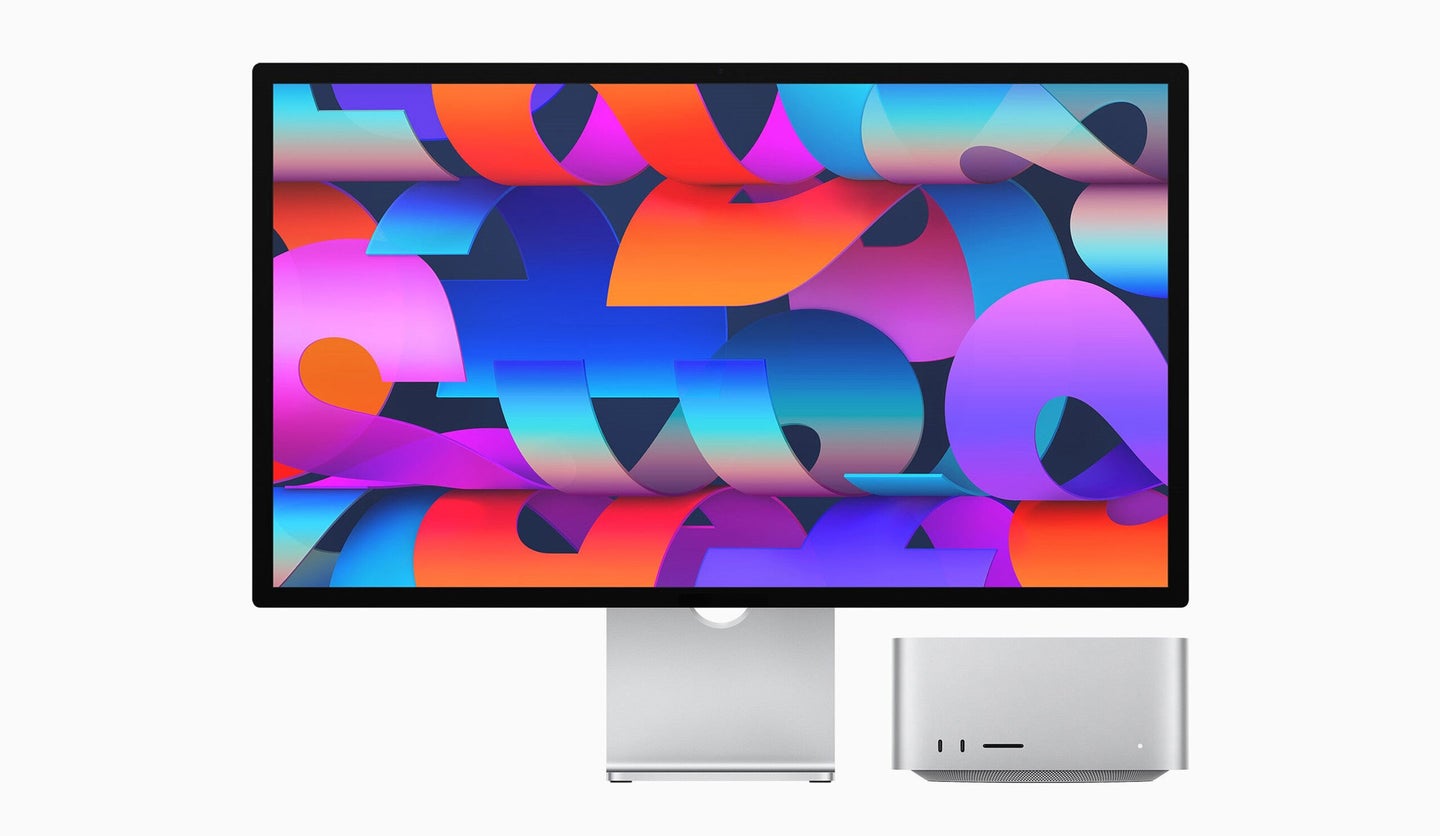 Apple announced a new professional-grade desktop computer, the Mac Studio, and a matching new monitor, the Studio Display. Unveiled as part of its March 8 “Peek Performance” event, the highly compact Mac Studio features a new variation on Apple’s M1 system-on-a-chip called the M1 Ultra. The hyper-efficient silicon architecture allows Apple to pack a high-end creative workstation into a chassis that looks like two Mac Minis stacked on top of each other. It sounds pretty incredible, if you’re willing to drop thousands of dollars for top-of-the-line performance.

Related: The best laptops for creators of all types

Though it isn’t actually a “Mac Mini Pro,” as rumors suggested, the Mac Studio kind of looks like an amped Mac Mini. The 7.7- by 7.7- by 3.7-inch system is extremely small and covered in the same anodized aluminum as most modern Macs. Keeping in line with the “cheese grater” design of the previous Mac Pro, the Mac Studio has a rounded base with thousands of small intake holes for air. The dual-blower cooling system pulls air in from the bottom and blows it out another set of cheese-grater holes in the back of the device. Supposedly, the cooling system is incredibly quiet, which would be remarkable since it is basically a solid block of red hot computer parts.

Make no mistake, though, the Mac Studio appears to be capable of giving every other computer in the Mac family a run for its money, performance-wise. There are two core versions of the Mac Studio. The baseline model features the M1 Max chipset, which we’ve seen in the more powerful versions of the 2021 MacBook Pros. It features a 10-core CPU, a 24- or 36-core GPU, and 16-core neural engine, reportedly amounting to performance many times faster than the 27-inch iMac across the board, and as much as 50-percent faster CPU performance than a Mac Pro with a 16-core Xeon processor. It also supports up to 32-64GB of unified memory and anywhere from 512GB to 8TB of SSD storage.

Stepping up to the flagship M1 Ultra model nets you a 20-core processor, 48-core GPU, and a 32-core neural engine. It offers 64GB to 128GB of unified memory and anywhere from 1TB to 8TB of SSD storage. That enables a 60-percent CPU performance jump over the already previously-but-honestly-still-pro-grade Mac Pro.

You might have noticed that most of the specs on the M1 Ultra version of the Mac Studio are conspicuously … double that of the M1 Max model. There’s a reason for that. The M1 Ultra is not actually a single SoC at all, but two M1 Max chips connected using a proprietary packaging architecture Apple calls “UltraFusion.” Other manufacturers have double-stacked processors and GPUs in a single system in the past, which can enhance a system’s power somewhat but usually offers diminishing returns. According to Apple, UltraFusion’s silicon interposer minimizes latency and reduces power consumption between the two chipsets. The result, supposedly, is as close to a double-powered processor as consumers have ever seen: According to Apple, the M1 Ultra chip outperforms similar 16-core processors by 90 percent while drawing less power.

Beyond some incredibly impressive claims about the Mac Studio’s leap in performance, I was excited to see that Apple’s new commitment to putting ports on its products remains intact. The Mac Studio features five Thunderbolt 4 ports (four in back and one in front), two USB-C ports in front, an SD card reader, two USB-A ports, ethernet, HDMI, and a headphone jack.

To go with the Mac Studio and M1 Ultra, Apple also announced a new Apple monitor, the Studio Display. The 27-inch 5K retina display technically allows Apple to offer a less expensive counterpart to its Pro XDR display, but with a $1,600 starting price, it’s far from an affordable option for the average user. Though it is considerably less expensive than the XDR, the Studio Display will likely still be a top-flight monitor, with P3 wide color and 600 Nits of brightness.

As with the Pro Display XDR, the stand situation for the Studio Display is slightly complicated. Technically, the display comes in three forms: a stand-free VESA-mountable version that you can hook up to a monitor arm or bracket, a standard monitor stand where the monitor can tilt up to 30 degrees, or a more adjustable (and more expensive) “tilt- and height-adjustable stand.” At least, in this case, the standard stand doesn’t cost extra.

The front of the display features a 12MP wide-angle camera, by far Apple’s best webcam on a display or computer yet. Because it has an Apple A13 Bionic chip, the same one used in the iPhone 11 and iPad 9, the display supports the iPhone’s “Center Stage” camera AI feature, which adjusts the webcam’s view to automatically frame its picture around any faces while recording video or during a video call.

And, once again, ports are back in a big way. The Studio Display features three USB-C ports and one Thunderbolt 4 port. Apple says you can connect up to three Studio Displays to a single 2021 Macbook Pro … assuming you have about $10,000 for the laptop and three monitors.

So when can I buy them?

Right now, actually! Both the Mac Studio and Apple Studio Display are available for preorder. Both the computer and display will arrive to preorder customers and hit stores on March 18, 2022.

The Apple Studio Display comes in three models: the stand-free VESA-mounted version, with standard stand, and with the tilt- and height-adjustable stand. As with the Pro Display XDR, you can also choose to upgrade to glare-reducing nano-texture glass. The price starts at $1,599 for the standard stand and standard glass and reaches $2,299 for the upgraded stand and upgraded glass.