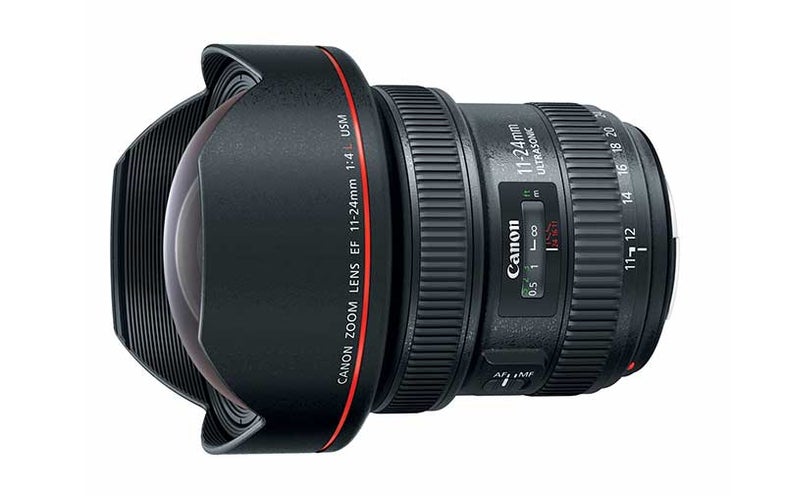 There are already three different options for wide angle zooms in Canon’s high-end L-series lens line, but the new 11-24mm F/4L USM is the widest by a good margin. But, despite its ultra-wide field of view, it doesn’t venture into fisheye territory.

The 11-24mm F/4L is actually a rectilinear lens, which means it does its best to combat the wacky barrel distortion and funhouse mirror effects that tend to happen at the edges of the frame with an ultra-wide lens. That’s not to say that it will be perfect, but you shouldn’t expect images that bulge dramatically from the center of the frame.

The lens has 16 elements in 11 groups and uses four aspherical elements to work the perspective-correcting magic. It also uses a whole litany of coatings in order to fight the flare and ghosting that can be a problem in lenses this wide.

As you might expect with a lens like this, it has a serious front element that protrudes from the barrel, so it uses an integrated lens hood as well as their impressively effective fluorine coating to help protect it from grime, dust, and all the other nasty stuff that can happen to front elements.

Now, because of all that engineering wizardry, this lens comes with a rather serious $3,000 price tag. That’s nearly double the price of the 16-35mm F/2.8L II and almost four times the price of the 17-40mm F/4L. For that kind of cash, we’re expecting some seriously miraculous image quality out of this thing. And with the massive megapixel count of the Canon 5DS demanding every bit of resolution it can muster.