Today is the 80th Anniversary of Canon’s First Camera, the Kwanon

The company's first prototype came together in 1934 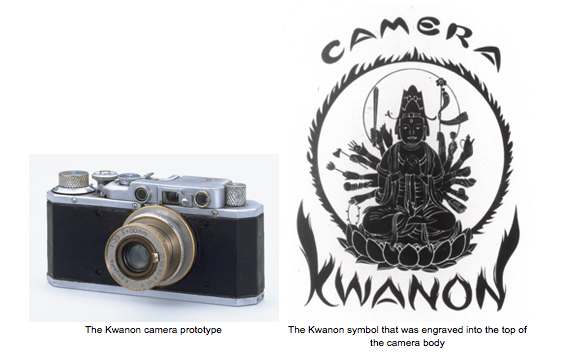 In the grand scheme of things, 80-years doesn’t seem like such a long time. Back in 1934, Canon built the prototype of their first camera, the Kwanon. Since then, quite a bit has changed.

Canon is celebrating the anniversary of the first camera by sharing some information about it. For instance, the name was taken from Kwannon, the Buddhist goddess of mercy who was etched into the top of the camera.

It was actually a full two years before Canon released a commercial version of their 35mm focal-plane-shutter camera when the Hansa hit in 1936.

You can check out the full press release, which is pasted below for a top-level look at all of Canon’s milestones. It’s interesting to see everything laid out like that. When you spend so much time engrossed in the products made by companies, it’s easy to forget where they started.

_MELVILLE, N.Y., September 2, 2014 – Canon U.S.A., the leader in digital imaging solutions, today announced that its parent company, Canon Inc., is commemorating the 80th anniversary of Canon’s first camera, the Kwanon. Marking Japan’s first 35mm focal-plane-shutter camera, the Kwanon was produced in prototype form in 1934, the culmination of the dreams of engineers who wanted to catch up with Europe, the leading presence in the camera industry at the time.

The engineers who created the camera decided to name it after Kwannon, the Buddhist goddess of mercy, hoping the deity would share her benevolence as they pursued their dream to produce the world’s finest camera. The camera’s lens, called Kasyapa, was named after Mahakasyapa, a disciple of Buddha. Additionally, the top portion of the camera body featured an engraving depicting the thousand-armed Kwannon.

In 1936, two years after the birth of the Kwanon and following much trial and error, Canon launched the Hansa Canon,* its first commercial 35mm focal-plane-shutter camera, thus embarking on the Company’s history as a camera manufacturer.

In 1959, Canon introduced its first single-lens reflex (SLR) camera, the Canonflex. Following, in 1961, was the Canonet, an immensely popular rangefinder camera that took the market by storm, selling out an entire week’s worth of inventory in just two hours. The Company, after the success of the Canonflex and Canonet, continued to lead the industry with a range of popular camera models, such as the F-1, a top-of-the-line professional 35mm SLR camera introduced in 1971, and the AE-1, introduced in 1976, which was the world’s first SLR camera equipped with a built-in microcomputer.

In 1987, following continued technological innovation, Canon launched the EOS 650, the world’s first AF (autofocus) SLR camera to incorporate a fully electronic mount system. In 1995, EOS marked its entry into the digital era and the lineup continues evolving today. In 2012, the Company started to ship the Cinema EOS System, a lineup of professional digital cinematography cameras and lenses. The Cinema EOS System was created through the culmination of various technological innovations that are centered on the optical technologies developed since the Company’s founding. Since its introduction, the Cinema EOS System has contributed to expanding the horizons of visual expression.

“Over the 80 years since the birth of the Kwanon camera prototype, Canon has continuously innovated to fulfill the Company’s never-ending ambition to create the world’s finest cameras,” said Masaya Maeda, Managing Director and Chief Executive, Image Communication Products Operations at Canon Inc. “Leveraging the technologies and know-how it has acquired over its history, Canon will continue contributing to the development of the photographic and video imaging culture through its technologies and products designed to satisfy the expectations of our customers._