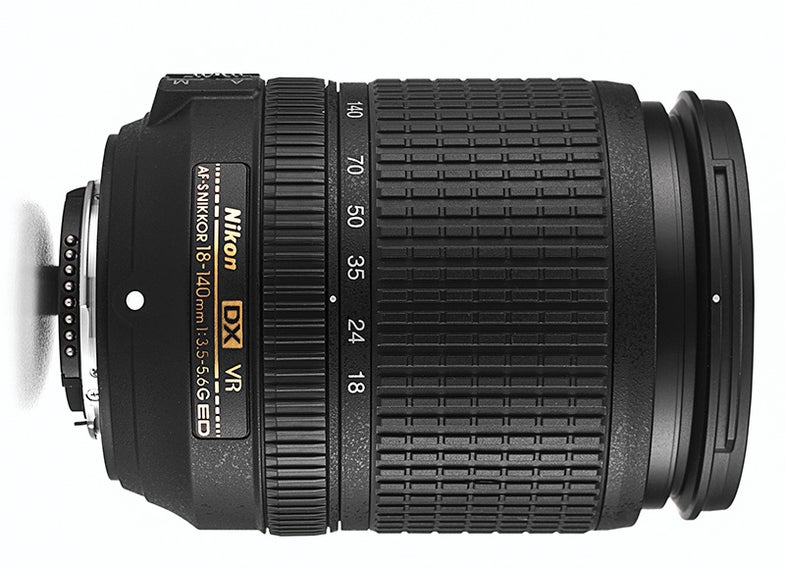 Nikon's 18–140mm is scaled almost perfectly for our test camera, the D5300. Its size, weight, balance, and control layout all contributed to a satisfying shooting experience.
SHARE

Weighing 1.15 pounds, the lens balanced nicely on our D5300 test camera. It’s also less bulky than the lens it replaces and takes relatively small 67mm filters. It is, however, large enough to cast a shadow at wider focal lengths when used with the D5300’s built-in flash. Attractive and well-marked (albeit without a depth-of-field scale), the lens offers smooth-turning zoom and focusing rings, as well as rapid, accurate, and essentially inaudible autofocusing.

On our optical bench, the lens produced Excellent-range SQF results across its tested focal lengths. Its numbers, in mid-90th percentile, proved slightly better than the four comparable APS-C zooms we’ve tested from Canon, Nikon, Pentax and Tokina. The Pentax and Canon, for example, both turned in low-90th percentile SQF numbers.

In our DxO Analyzer 5.3 tests of distortion control, we found Visible barrel at 18mm (0.70%), and Visible- and Slight-range pincushion at 70mm (0.35%), and 140mm (0.29%), respectively—roughly similar to the other tested zooms. The Nikon’s control of edge vignetting (gone by f/8 at three tested focal lengths), however, scored slightly below that of the other glass.

Three testers each gained 3 extra stops of sharp handholdability with the Nikon’s VR engaged—noticeably better than the
Canon’s 2.5 stops.

With superior handling, a generous zoom range, and an effective stabilization system, this lens will deliver almost everything photographers would expect from a wide-to-tele, multitasking zoom.