Clothing for photographers that's high on both style and functionality 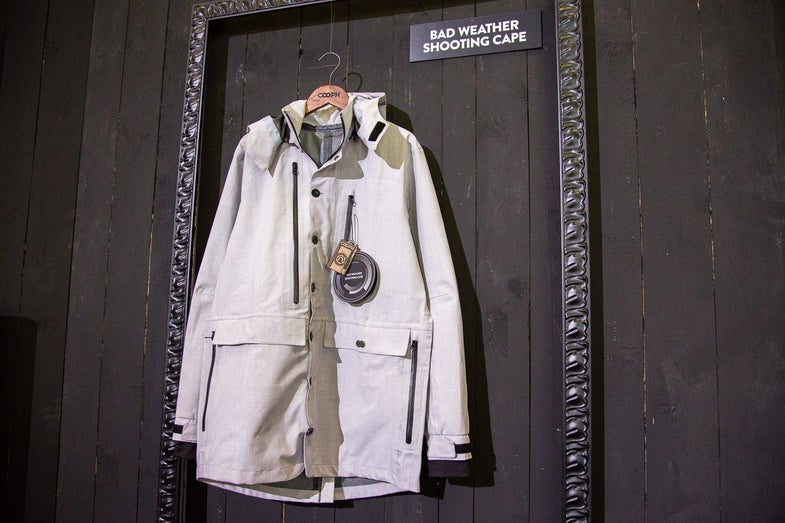 When it comes to fashionable photography gear, things have gotten a lot better in recent decades. When was the last time you saw a photo vest? But COOPH clothing makes extremely stylish clothing that’s made with photographers in mind.

The thing that drew me into the booth was the Bad Weather Shooting Cape. The name is funny, but once the rep explained to me what it was, I was actually impressed. The jacket itself is made of a totally waterproof material and has big zippers leading straight to the inside of the jacket so you an stick a camera out of the opening and shoot while keeping your gear protected. It also has a few massive pockets built-in so you can carry your gear out of the elements.

The hoodies are equally as useful. They have similarly huge pockets and lots of access to the inside via zippers. It even has snaps at the bottom and the top so you can fold the hoodie into a pillow when you travel or wrap your gear before putting it in a bag.

The Photographer’s Long Sleeve Shirt has a built-in lens cap pocket, as well as a lens cloth sewn into the bottom of the shirt. On the lens cloth is a photo from which the color pallet of the shirt was selected. Snaps on the arms make it very easy to roll them up.

The gloves are made from super-soft goat leather and have finger tip pads that cooperate with capacitive touch screens like the ones you’ll find in cameras and smartphones.

Even the hats have some photographic utility. Some have simple lens cap pockets on the site, but others have a hidden bungee cord built in so you can turn them into lens pouches when you’re not wearing them.

And yes, the T-shirts have lens cap pockets as well.

Unfortunately, COOPH gear isn’t available in the USA, but they said they’re hoping to be selling there by the middle of 2015.