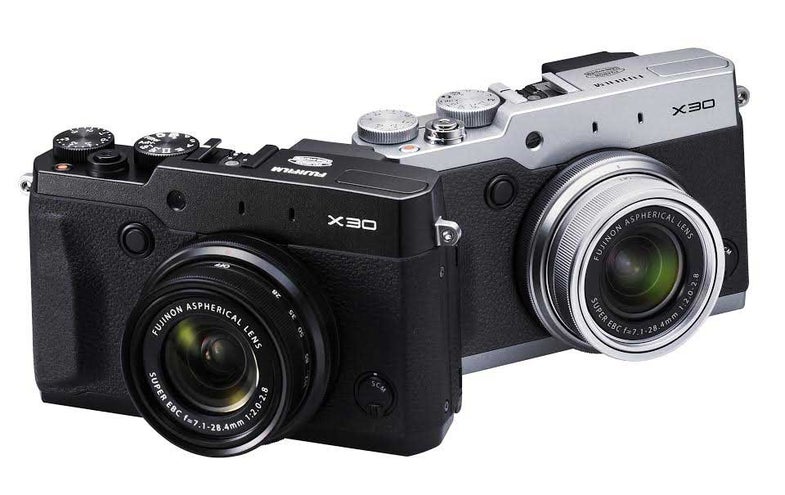 Photokina 2014 is going to be an interesting year for compact cameras. The show is typically a big coming out party for new models, but with the smartphone onslaught growing ever-stronger, I’m expecting to see a smaller pool of more powerful little cameras trying to make a stand. Fujifilm’s new X30 advanced compact camera suggests that might be the case.

The X30 uses a 2/3-inch X-Trans CMOS sensor, which is bigger than you’ll find in many other compacts, but still considerably smaller than the APS-C chip you’ll find in its big sibling, the X100s. The lens also remains mostly unchanged, keeping its 4x zoom range, but adding a new control ring to handle common functions like changing aperture or ISO.

One of the biggest upgrades is the new viewfinder. The optical viewfinder on the X20 was nice, but it’s ultimate utility was somewhat questionable. Now, however, Fujifilm is leveraging its excellent EVF technology, giving the X30 a 2.36-million dot OLED viewfinder. That’s a considerable upgrade if you’re a fan of eye-level shooting. If you prefer your camera at arm’s length, they have made some upgrades there as well. The LCD now tilts up and down so you can use it at waist level (something street shooters will surely appreciate) and has considerably more resolution at 920k.

Overall, the X30 isn’t a revolutionary change from the X20, but that’s not necessarily a bad thing. The changes that have been made are ones that fans of the line have likely been asking them for. And Fujifilm has done a pretty excellent job listening to their users when it comes to developing their cameras.

The camera will be available at the end of September for a familiar price of $599. That keeps the price of the line fairly steady, while adding a lot of new technology in the viewfinder.

We should get a chance to check out the new camera at Photokina 2014 in a few weeks, or possibly even sooner, so keep an eye out for impressions. Full press release is below:

The FUJIFILM X30 gives enthusiast and professional photographers a vast array of new features, and delivers the same award-winning image quality and design that the FUJIFILM X Series is known for around the world. The new X30 features a Real Time Viewfinder – which is the largest, brightest, fastest and highest resolving viewfinder in its class*1

The X30 also includes a large tilting 3.0” 920K-dot premium clear LCD monitor, increased battery performance, and a strong, yet lightweight, die-cast magnesium alloy body that is superbly designed to add a real sense of style and elegance to the camera.

The new FUJIFILM X30 uses an innovative Real Time Viewfinder with a large magnification of and a display lag time of just 0.005*3 its class. It offers a clear, high-definition Live View with a new 2.36M-dot organic EL viewfinder and dedicated lens that improves visibility by automatically controlling the viewfinder’s brightness according to the ambient light levels. The Live View display can also be set to reflect shooting conditions, or offer a natural view close to what is seen with the naked eye, while the viewfinder’s eye sensor automatically switches the visible information when the camera is positioned vertically or horizontally.

The FUJIFILM X30 uses the award-winning X-Trans CMOS II sensor with phase-detection AF and the EXR Processor II to give photographers high-speed performance, amazing resolution and low noise for extraordinary images. The X30’s phase-detection system focuses in just 0.06*4 seconds, has a startup time of 0.5 seconds*5

High precision F2.0-2.8 4x manual barrel zoom lens The FUJIFILM X30’s lens is made up of 11 glass elements in nine groups, including three aspherical lens elements and two ED lens elements. The result is an ultra-bright lens with a wide-angle maximum aperture of f/2.0 and telephoto maximum aperture of f/2.8 for beautiful, high resolution images. Additionally, the X30’s lens incorporates seven diaphragm blades for stunningly soft ‘bokeh’ to make your subject stand out from the background.

The X30 has an optical 4x manual zoom lens that allows quick and precise control over composition. The X30 also has a unique image stabilization mechanism that shifts five lens elements to compensate for camera shake by up to four stops*6 stabilization system also effectively prevents motion blur while stopping vignetting and loss of image resolution that usually results from shake compensation.

The new FUJIFILM X30 now includes two rings on the lens: a manual zoom ring and control ring. The control ring is positioned behind the manual zoom control and allows the immediate change of aperture and shutter speed settings while fine-tuning image composition. Functions
such as ISO sensitivity, film simulation, white balance and continuous shooting can be assigned by pushing the control ring setting button at the front. Two top-plate dials and six function buttons positioned on the back of the body also offer faster access to regularly-used features for

*1: Fujifilm research as of August 2014. Compared with other compact zoom digital cameras,

format equivalent) at infinity and diopter set to -1.0 m-1.

*4: Fujifilm research as of August 2014. Compared with other digital cameras equipped with 2/3”

sensor or larger, based on CIPA standards, and conducted in High Performance mode.

than the set frame rate can be set._