Is DJI really working on a parachute for your copter? 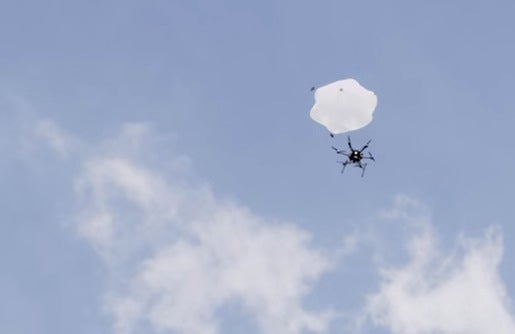 The website Gadgetify recently spotted something intriguing—an unlisted video from DJI that shows that the company is working on a parachute for a number of its aerial systems, called the DJI DropSafe. That’s right, a new addon that means if something were to go horribly wrong while flying, it might not smash into a thousand pieces, utterly destroying both the copter and camera. And while there’s still not a lot of information, it’s an intriguing concept.

The video shows off a prototype of the DJI DropSafe, a parachute for the S800 or S1000 aerial systems. These systems start in the thousands of dollars, and by the time you’ve added camera, controls, and all your extras, it’s not a cheap rig. Which is why a safety mechanism makes sense.

According to the video, the DropSafe weighs less than 550g (20oz), and can be set up to automatically deploy. When needed, it shoots out in less than 0.5s, automatically killing power to the rotor blades so as not to get tangled. It’s even a reusable design so you won’t need to buy a whole new one each time.

We have no idea when the DropSafe will come out, or how much it will cost. But if you’re flying the better part of $10,000 worth of gear, the added security of a rapidly deploying parachute may make a lot of sense.