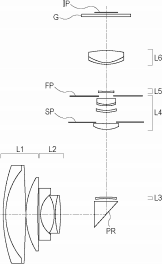 Have you ever wondered how underwater cameras manage to fit an optical zoom into a body where the lens doesn’t seem to move at all? Frequently, they use a system of what’s known as “folded optics”, rerouting the light along a bouncing path rather than straight from lens to sensor, allowing the camera to squeeze a zoom into a totally enclosed space. A new Japanese patent for Canon has pushed that concept to the limit, with a design for a 45x folded zoom, which could theoretically end up in a waterproof camera.

The patent was spotted by Japanese site Egami, which cites it as a 45x zoom, with a 1/2.3-inch sensor, 24-1066mm equivalent, f/4-9 lens. It would have 12 elements in 9 groups, and what differentiates it from your standard superzoom patent is the fact that the diagram shows a 90° bounce in the light path.

Egami links this to the Canon D-series, which uses optical folding to keep the lens housed inside a waterproof, shockproof system, so that it can take all manner of abuse without getting water, sand, or other detritus in its works.

On the other hand, we’re a bit more skeptical about the Canon D-series link, if only because a 45x zoom makes almost zero sense in an underwater camera. As anyone who’s shot underwater knows, light dropoff happens extremely fast, and anything beyond just a moderate zoom become almost impossible to see. However, a tough superzoom does make some degree of sense—as does using this folding optics to just shrink down the size of the superzoom all together. Think about the Sony T-line of cameras, which were incredibly thin. If Canon could squeeze a 45x zoom into a body the size of its current 20x compact zoom cameras, that would be a major selling point.

And folded optics can lead to some pretty extreme form factors.