An updated ILC with a viewfinder gets some nice new stuff 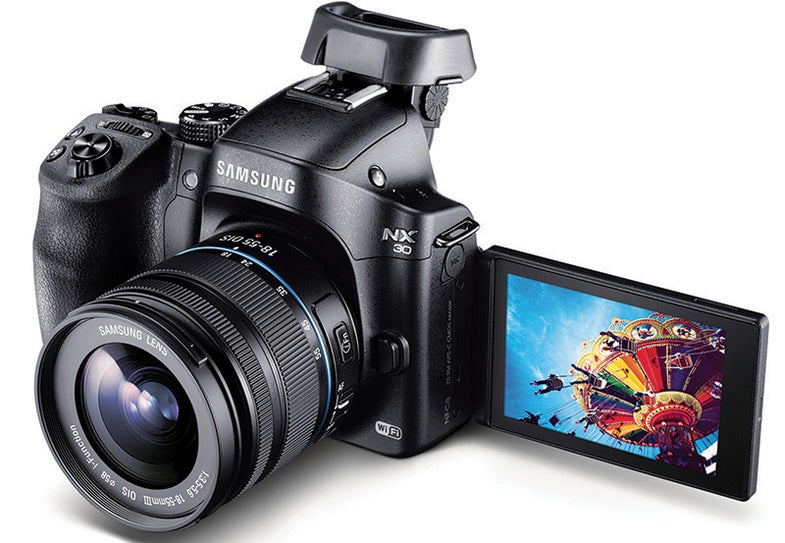 Samsung continues to make impressive progress with its interchangeable-lens compact camera system, with bodies made in both the rangefinder and DSLR styles. The newest in the latter category, the NX30, makes steep improvements in both performance and handling compared with its predecessor, the NX20.

In addition to a new sensor, Samsung graced the NX30 with a more secure-feeling grip, an articulating, 3-inch, 1.037-million-dot OLED touchscreen, and a 2.36-million-dot LCD electronic viewfinder that can be pulled out away from the finder hump and tilted upward. Plus, as is now the case for all of Samsung’s ILCs, the NX30 ($999, street, with 18–55mm f/3.5–5.5 OIS lens) comes with a full version of Adobe Photoshop Lightroom 5.

All told, the package looked like an attractive option in a mirrorless camera with built-in EVF, so we decided to find out if it lives up to its promise.

Though the NX30’s 20.3MP CMOS sensor carries the same number of pixels as its predecessor’s (as well as that of Samsung’s current top rangefinder model, the NX300), this new sensor has shallower pixel wells intended to let more light reach the photodiodes. As we did with our tests of the Samsung NX300 and Leica M, both of which ship with Adobe Lightroom, we processed the test results with varying amounts of luminance noise reduction applied and found the best balance of noise reduction and resolution for each of the camera’s ISOs in whole-stop increments. This worked out to 25% noise reduction at ISO 100 and ISO 200, 50% reduction at ISO 800, and 75% reduction at ISO 1600 and above. Some photographers may feel that 75% noise reduction is too much, so this shouldn’t be seen so much as a recommendation as a starting point—you can always adjust it to your liking when you process your own images.

With these noise-reduction settings applied, the NX30 earned an Excellent overall image quality rating from ISO 100 through 400. That’s the same result that the NX300 got when we tested it for the August 2013 issue, and one full ISO step better than the NX20 tested in October 2012.

In our resolution test, the Samsung NX30 captured 2560 lines per picture height at ISO 100, which is high enough for an Excellent rating and a virtual tie with the NX20’s result. At ISO 400, it dropped to 2530 lines. After that point the new camera dropped below the 2500-line cutoff for our top rating. Still, it managed to turn in 2430 lines at ISO 6400. Resolution drops more precipitously as sensitivity increases from there, though, finally landing at 2030 lines at the camera’s top sensitivity of ISO 25,600.

In our noise test, with the stated settings, the NX30 held noise to a Low or better rating up to ISO 3200. That’s impressive enough, but remember that it’s obtained with 75% noise reduction. With 50% noise reduction at ISO 3200, the test result would still be in the acceptable range with a score of 2.9, just below our cutoff for an Unacceptable rating. These results leave the NX20 in the dust—its noise was Unacceptable by ISO 1600.

We were also impressed at how low noise stayed at ISO 100 through 400 with only 25% noise reduction applied. Given Lightroom’s particularly good noise reduction, there is minimal loss of resolution at the 25% setting. With no noise reduction at all, the NX30 would have gotten a Low rating at ISO 100 and an Unacceptable by ISO 800.

Nearly matching the results of Samsung’s NX300, the NX30 earned an Excellent rating for color accuracy with an average Delta E of 5.6—remarkable,  and significantly better than the NX20’s Excellent-level 7.4. As always in our tests, we click a neutral gray patch for white balance during RAW conversion. You should always use a gray card when shooting for critically accurate color.

While the NX30 generally looks a lot like the NX20, it benefits from some obvious improvements. The grip is considerably more ergonomically shaped. You’ll find a divot for your middle finger that gives a more secure feel when angling the camera body; on the camera back there is a wonderful angled ridge for your thumb to press against for a better hold.

The controls aren’t quite as sophisticated as we’ve been seeing lately in some cameras, but they get the job done. Plus, if you’re a fan of Samsung’s i-Function lens-based controls, then you may give the NX30 a few extra points here. There are three assignable buttons, though the functions you can assign are pretty limited. One of those buttons defaults to Wi-Fi activation, and we left it at the default for the entire field test to have that direct access to wireless.

There are two command wheels, but one of them surrounds the pad used for menu navigation. We prefer a second command wheel toward the top of the camera back, where your thumb can more easily reach it.

The EVF is quite nice, with a fast refresh rate. We didn’t find ourselves angling it upward much during our field-testing, but if you like shooting while looking down, this feature could set the NX30 apart from some other cameras. We’ve heard from some landscape and portrait photographers who really like to shoot that way, and some portraitists say that the disconnect created when the subject can’t look them in the eye helps their subject gaze into the lens more intensely. We ended up getting more use out of the articulated touchscreen, whether to frame images at awkward angles or just to fight glare during playback by tilting the screen.

Autofocusing is quite fast for an ILC, but not the fastest we’ve seen. The AF did a fine job of keeping up with the camera’s burst speed of 9 frames per second—a noticeable improvement over the NX20. And with 28 JPEGs per burst, or 11 RAW, burst fans should have an adequate number of shots for most purposes. Also, unlike the NX20, this camera will let you access menus and controls while it’s clearing the buffer.

Samsung continues to do a great job at implementing Wi-Fi and NFC into its ILCs. The NX30 can push images to your phone as you shoot, let you manage all the most important camera controls from your phone, and give you a live view of what your camera is seeing. Olympus lets you control more esoteric camera settings, but we were pleased with what Samsung offers, since it is particularly easy to control the camera remotely and share pictures on the go. Plus, the NX30 uses dual-band Wi-Fi, so it should be able to deal with situations in which you face a lot of radio interference. For instance, we saw the NX30 seamlessly operated by a cellphone in a demo at a trade show—an environment where Wi-Fi connections usually fail.

Video shooters should be pleased with the footage from the NX30, which shows relatively few artifacts, plenty of detail, and nice-looking colors. There’s an HDMI output that allows a clean output for recording to or streaming through an external device.

The Samsung NX30 is a meaningful improvement over its predecessor, the NX20. For shooters who want a built-in EVF, this camera is the best option that Samsung offers.

Sony’s upcoming Alpha 6000 will, we predict, provide stiff competition for the NX30. In demos of preproduction units, that 24MP APS-C Sony has wowed many with its fast AF speed and OLED EVF. Fans of the DSLR-style body design, though, will note that that Sony doesn’t have the same form factor as the NX30. Olympus’s OM-D E-M5 does though, and fans of Four Thirds can get it for about the same price as the NX30.

Samsung continues to fill out an already impressive line of lenses: We were able to use such gems as the 60mm f/2.8 macro and 85mm f/1.4 during our field testing, and very much enjoyed the experience. We’re confident that if you do the same, you’ll have fun too.