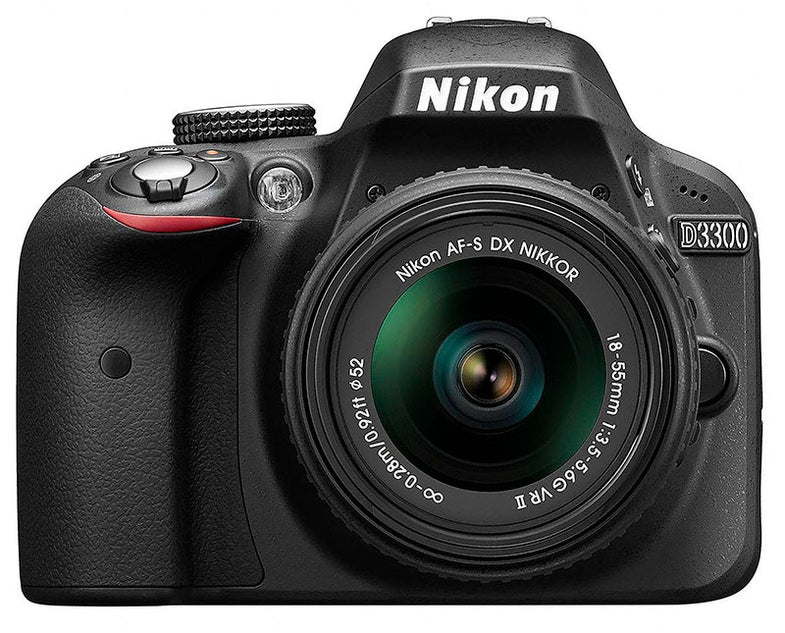 Despite the growing popularity of interchangeable-lens compacts, Nikon continues to offer compelling entry-level DSLRs. Its latest, the D3300, succeeds the D3200 we tested in our August 2012 issue. The pixel count of this new $647 (street, with 18–55mm f/3.5–5.6G Nikkor VR II lens) APS-C-sensor camera holds at 24.2MP and the metering and AF systems stay the same as the D3200. But bursts have increased to 5 frames per second, the buffer can hold more JPEGs before filling, and the top ISO reaches 1 stop higher, to ISO 25,600.

This could reflect the difference in hardware, but it may also be due to changes in the latest version of Nikon’s View NX software that ships with the camera, which we use to convert RAW files to TIFFs in our tests. DxOMark.com, which tests unprocessed RAW image files, rates the D3300’s higher ISO performance above the D3200’s.

This may have more to do with Nikon’s defaults for automatic noise reduction in RAW conversion than the actual RAW sensor output. But we regard the manufacturer’s default as its standard for the camera and always use the provided software’s defaults for our tests. That said, one would expect more noise here, since the Nikon has significantly more pixels packed into nearly the same APSC- sized sensor area.

When shopping for cameras in this market segment, you have to think about how much resolution you really need. If you crop often and severely, the D3300’s extra pixels make a lot of sense. If you don’t usually crop much, then you might get more out of the Canon.

In autofocus, the D3300’s results were very similar to its predecessor’s. At the brightest light level in our test, the D3300 focused in less than a half-second and remained under 0.6 sec down to the brightness of a typical living room. At EV 0, the level of an average nighttime scene, the D3300 still focused in less than a second. At EV –1, the lowest light for which the camera’s AF is rated effective, the speed became more erratic but averaged out to 1.16 sec. Canon’s T5i was able to focus faster in bright and medium light, but in dim lighting the two cameras tied. Since the D3300 is aimed at amateurs, we think its AF results are plenty good for the kind of use it’ll likely see.

With an average Delta E of 6.4, the D3300 easily earned an Excellent rating in color accuracy, a test that most current DSLRs ace.

Though the D3300 is a bit smaller than the D3200, the overall feel and button layout is very similar. The camera still feels quite stable in the hand. There’s only one command wheel, so you must hold down the exposure-compensation button when in manual. Nikon clearly assumes that most D3300 owners will use full auto or one of the priority shooting modes. While this may well be true, we still prefer a camera that has two command dials, especially when you can assign exposure comp to one of them when in a priority mode.

Movie recording got an upgrade to 1920x1080p at 60 frames per second, from the D3200’s 30 fps. We expect that non-pros will be plenty happy with the footage from the D3300, which showed lots of detail and no more artifacts than one would expect from an inexpensive DSLR.

Burst speed now meets our criterion of at least 5 fps for amateur sports shooting. With JPEGs, you can get upwards of 100 shots before the buffer fills, likely the result of D3300’s newer Expeed 4 processor; with RAW you get 11 shots per burst. That’s down from the D3200’s 18, but by no means shabby for a camera of this class.

If Nikon did one thing wrong, it was omitting built-in Wi-Fi (same with the Canon T5i). You can add its optional WU-1a wireless mobile adapter ($60, street) to transfer images straight to your smartphone and control the D3300 from the phone. The new camera costs about $50 less than the D3200 did when we tested it, taking some monetary bite out of the equation.

Nikon’s D3300 doesn’t change too much compared with the D3200—and that’s mostly a good thing. It captures tons of detail in still images, serves up extremely accurate colors, and has enough power to get great shots of any family’s high-school sports star.

Plus, Nikon put out a relatively inexpensive 35mm f/2.8G lens at the same time as the D3300. This rounds out a series of inexpensive primes that Nikon has offered in recent years. It also signals a true commitment to amateur shooters and bolsters an already extensive array of glass and accessories that few ILC makers can match.

If you’re torn between Nikon and Canon and not invested in either system yet, you’ll have to decide whether Canon’s twisting, tilting LCD trumps the D3300’s fixed one, and whether Nikon’s choice of more noise for more pixels makes a difference to you. From where we sit, it’s a tossup.