Setting Up a Backboard Camera To Shoot NCAA Basketball Games

Getting up close for the slam dunk 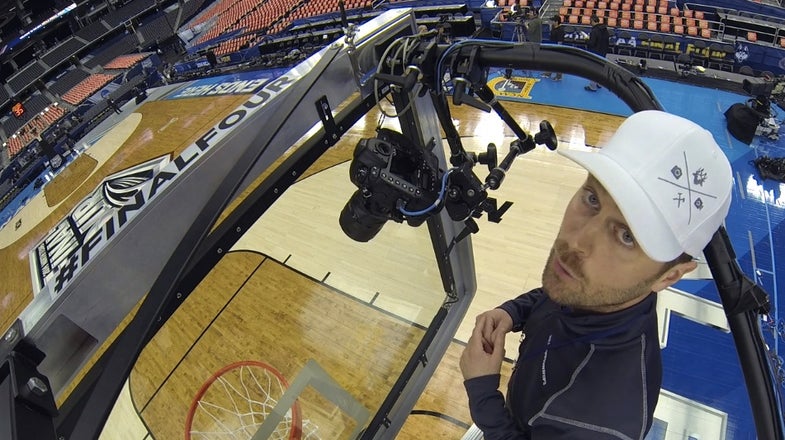 Have you ever wondered how sports photographers get those incredible shots of a dunk or a rebound, shot right through the backboard? Photographer Brett Wilhelm with NCAA Photos has put together this behind the scenes, showing how they rig a Nikon D4s to grab the action.

The camera itself is held in place by multiple redundant systems, so that it won’t get too jostled or fall during the repeated hits that a backboard will take. It has two armatures locking it in place, as well as security loop to prevent it dropping should those fail. It’s hard wired in place for power, control, and exporting images—with wired controls preferred over wireless in order to prevent radio interference.

The camera is set up with a 17-35mm lens, manually focused. They have it shoot f/5, 1/800s, and ISO 6400. The ISO is boosted despite the bright lights on the court because the lens has a polarizing filter on it to cut the glare from shooting through the transparent backboard.

These sorts of shooting setups are frequently used to get really dramatic, up close images of the action, and it’s fascinating to see exactly what goes into to making them.