Fujifilm’s X-T1 is the first camera to allow the use of UHS-II memory cards. Get ready for some lightening fast read/write speeds. 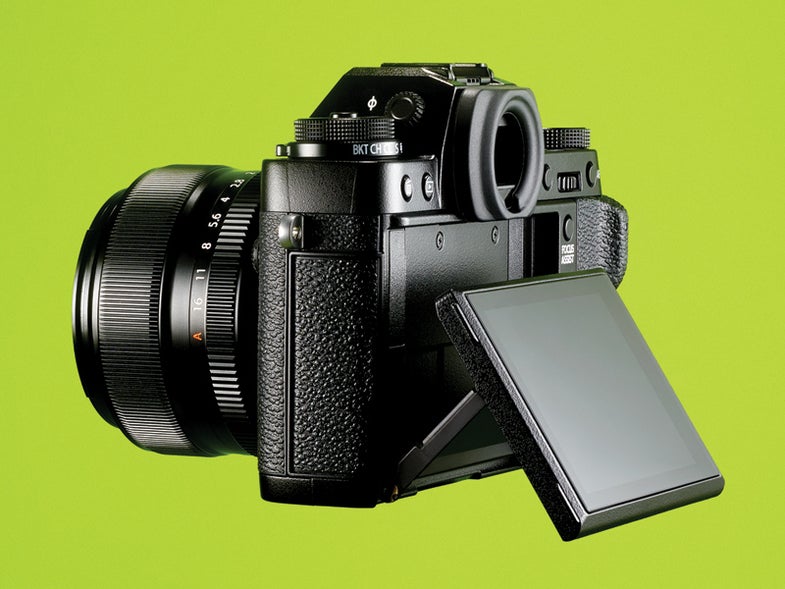 If it seems like it was just last month that we tested a Fujifilm camera, that’s because we did. The company continues to put out cameras at a breakneck pace as it builds out its line of X-series interchangeable-lens compacts. Its new flagship, the X-T1, has the same imaging sensor as the X-E2 we tested in March.

But in this new model ($1,299, street, body only; $1,699 with 18–55mm f/2.8–4 Fujinon XF R LM OIS lens), that sensor finds its home inside a weather-sealed magnesium-alloy body that also houses the snazziest electronic viewfinder yet to grace a Fujifilm body. Along with a bevy of dials, a pair of command wheels, and even a PC sync terminal to trigger strobes, the camera evokes yesteryear while also evokes yesteryear while also providing a very high-level shooting experience.

As soon as we saw it, we were eager to run it through the Popular Photography Test Lab and see how it stands up to field testing.

In the Test Lab
Test results of the same model sensor in different camera bodies sometimes turn out slightly different, especially if the manufacturer has ample time to fine-tune the way the images are processed, manage heat better, or other such factors. In this case, we saw nearly identical results for all the sensitivity settings that the cameras share, but the X-T1 does offer one extra stop of sensitivity over the X-E2.

The new camera earned an Extremely High rating in image quality from ISO 100 through ISO 400. As with other Fujifilm X-series cameras, the X-T1 will let you record only JPEGs when set to the extremes of its sensitivity range, in this case ISO 100, 12,800, 25,600, and 51,200. So our test results at those settings are based on JPEGs straight from the camera. We should also note that we used the Fujinon XF 35mm f/1.4 R lens (a 52mm equivalent) for our lab testing, as we have with every Fujifilm X-series camera to date.

With the recent spate of cameras that leave out anti-aliasing filters, we’ve seen varying amounts of aliasing effects on images of our resolution chart. And we did notice evidence of aliasing in the X-T1’s resolution images. Interestingly, we noticed no false-color aliasing in the vertical or horizontal line arrays, but did see prominent false colors in the diagonal arrays when processing RAW images into uncompressed 16-bit TIFFs with the included Silkypix conversion software.

When viewing JPEGs generated by the camera, most of that false color was gone. It remains to be seen if other third-party RAW processors will do a better job than Silkypix in this regard, as the X-T1 was not yet supported by any as of press time.

In our color accuracy test, the two sibling cameras turned in the exact same result, earning Excellent ratings with average Delta E measurements of 6.2. That means extremely accurate color reproduction when using the Standard film simulation mode and a gray card to normalize white balance, as we always recommend when striving for the most accurate color.

Noise tracked almost exactly to the X-E2’s results, though there was a tad more noise at ISO 100, while still remaining controlled enough for an Extremely Low rating.

In the Field
The X-T1 feels very solid in the hand, and it sports a nice grip that, while not as extensively sculpted as you’ll find on some cameras of this caliber, provides a more-than-adequate hold. A very comfortable ridge on the camera back affords plenty of leverage when tilting the camera.

The control system is made for people who like dials. ISO, shutter speed, drive mode, metering mode, and exposure compensation all have dedicated dials. The drive and metering wheels are stacked underneath those for ISO and shutter speed, respectively, and can be moved using a tab on the front of the camera. One of our field testers accidentally reset the drive-mode dial while the camera was in his bag; other testers did not run into this, but you may want to be careful here. The very nature of the dials, of course, means that you can check this before you even turn the camera on.

The biggest fault we found in the control system is that Fujifilm didn’t add an H3 setting on the ISO dial. Instead, if you want to make use of ISO 51,200, you must dig down into the setup menu, and switch the H2 setting on the dial from ISO 25,600 to ISO 51,200. It is very inconvenient, and makes it feel like Fujifilm decided to add the highest sensitivity setting very late in the design process.

The X-T1’s new EVF marks a big improvement for Fujifilm—and for ILC design in general. The 0.5-inch 2.36-million-dot OLED has 0.77X magnification and an extremely fast 0.005-second display lag, according to Fujifilm (we don’t currently have the means to measure EVF display lag time).

The image presented is enormous—so much so that Fujifilm includes both a Full and Normal setting so you can reduce the size if you prefer. The larger Full setting was the one we preferred for most of our field testing. The smaller Normal setting does push most of the information outside of the image area, which gives a less cluttered framing experience, but we still preferred the more immersive feeling of Full.

As always with EVFs, you sacrifice the true through-the-lens view, but you gain the ability to access menus without taking your eye away from the finder, and can make use of a histogram as you frame. You can also shoot with an electronic level overlaid, which can be extremely helpful to any shooters with horizon issues.

Video showed a pleasing amount of detail and well-saturated colors, but also more artifacts than we’ve seen in a lot of other ILCs. It should be plenty good for most casual shooting, though. Burst shooters should enjoy the X-T1’s continuous drive of 8 frames per second. When shooting JPEGs, you can capture up to 47 images before the buffer fills, though if you use the slower 3 fps mode you can shoot until your card is full. If you’re shooting RAW, you can get up to 23 shots at 8 fps before the buffer fills.

Even better, the EVF’s short lag time lets you see what’s happening as you shoot bursts more easily than most other ILCs. Sony’s OLED finders are the only competition, and we’re hard-pressed to pick a favorite.

As any camera maker should these days, Fujfilm includes Wi-Fi in the X-T1. The Camera Remote smartphone app lets you use an iPhone or Android to view what the camera’s sensor is currently seeing and capture images. You can select your AF point on your phone’s touchscreen and adjust any major camera setting, including the flash mode, white balance, self-timer, ISO, aperture, shutter speed, and exposure compensation. You can also record video and there’s even a battery level indicator. Olympus’ app does provide more menu settings, but we’re pleased with what Fujifilm offers here.

The Bottom Line
For about $300 more than you’d spend on an X-E2, the Fujifilm X-T1 offers a significantly more comfortable shooting experience. Not only is your eye centered above the lens when using the EVF, but the EVF itself is much better, especially for bursts. The dials provide great control of the camera, especially if you don’t see yourself ever using ISO 51,200.

Minor gripes aside, the X-T1 is a wonderful camera to use and we don’t look forward to having to send our test camera back. But as consolation, there are always more cameras waiting to be tested.