A compact hexagonal softbox that's built for shooting on location 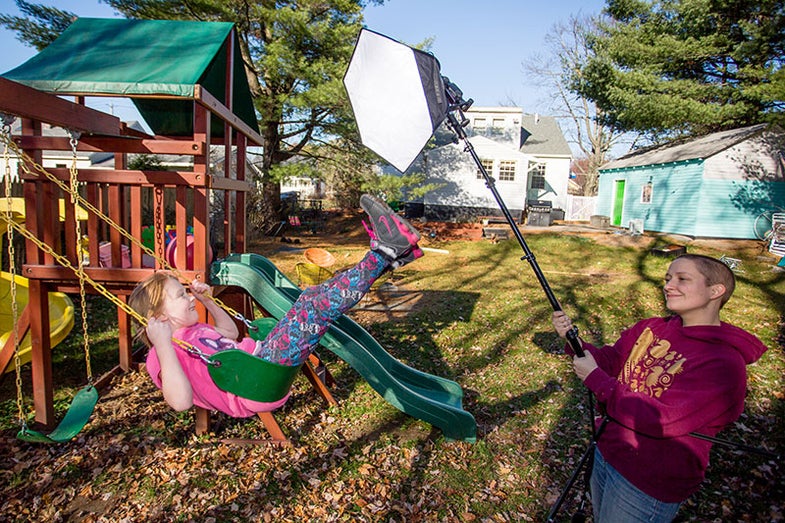 A small soft box can be an extremely handy tool for an on-location light kit and Flashpoint made the Hexapop as easy as possible to set up and tear down.

What is it?
As the name suggests, the Hexapop has six edges giving it a hexagonal lighting surface. It’s available in 20- and 24-inch models. For this test, I was using the 24-inch model. The rods that support the box are attached to both the fabric and the mounting ring, so it sets up much quicker than traditional soft boxes that need to be assembled. It’s almost like setting up an umbrella. Here’s a quick demo of how it works.

Using it
Once the rods are in place, you mount the flash onto the box using a cold shoe with two prongs, to which the modifier attaches. Having several pieces for mounting isn’t ideal, since losing one puts you out of commission, but the included carry bag keeps everything together.

When assembled, the whole things feels pretty sturdy, if a little wobbly, but I had no problem giving it to an assistant to hold on a stand well above her head without an issue. I would use a sandbag to make sure your stand doesn’t tip over, though, because I can see a fall causing a lot of damage to both the box and your flash. The flash sits outside of the enclosure, so it won’t protect your light from the elements.

This is the final shot from the setup used above. The box didn’t turn on the stand like some umbrellas do.

The light
Unlike some of its higher-end competition, the Hexapop only has a single diffuser panel at the front of the box. Since the flash points straight through to the diffuser from behind the box, I found the light pattern to have a pretty notceable hot spot in the center when using it up close. I shoot a lot with shoot-through umbrellas so it’s not something I’m unfamiliar with, but if you’re doing a lot of close-up head shots or need even lighting, it might cause you some problems.

You can see the hot spot hitting right above her right eyebrow where things get a bit harsh.

Because the flash shoots directly through the Hexapop, you don’t lose very much light in transition. Compared to something like the Westcott Apollos, into which the flash actually fires backwards, you get a lot more efficiency.

What’s good?
• It’s light, and the included bag makes it very easy to carry around.
• Setting it up takes literally seconds and the rods and ring feel well-made.
• The 20-24-inch sizes are great for people who typically use umbrellas but want something a little more directional.
• The $169 price point puts it in the middle between the value brands and the more expensive models.

What’s not so good?
• Multiple pieces needed for mounting make the mounting system seem a little awkward, but offers more adjustability.
• No interior baffle gives the light pattern a hot spot in the center of the 110-degree field of coverage.
• One-piece design makes set-up easier, but it doesn’t pack flat like assembled soft boxes.

As you back up, the light is more directional than a shoot-through umbrella.

Should you buy it?
If you’re going to be doing a lot of tight head shots and need extremely even light, you’ll likely benefit from stepping up to something with a secondary diffuser to even the light out a little bit and avoid hot spots.

But, if you’re looking for a catch-all soft box that you can set up in a hurry on location, this seems like a fine option. There are other cheaper options out there, but in my experience, they definitely feel cheaper.