Handmade Photography Gear: A Look Into the World of Custom Cameras and Accessories 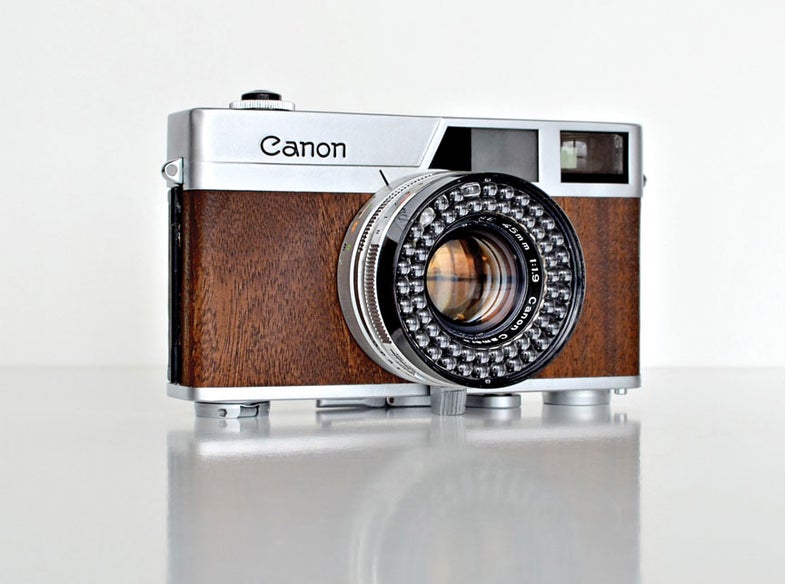 _The handmade, labor-of-love trend isn’t just for artisanal pickles and custom-sewn shirts from Etsy. A cadre of small companies are hand-building cameras to buyers’ specs, crafting lenses you’d never see from an assembly line, building gorgeous wooden shutter release buttons, and more. Here are a few little brands making amazing things­—and the story of what it takes to create them. _

Have you ever wished for photographic equipment you’ve never seen in a store, or longed to give your out-of-the-factory camera a personal touch? Or just wanted to make a picture but you couldn’t find the gear to do it? These dedicated photographers did. Each of their stories is different but, inevitably, a certain spark—personal or practical—started these artisans on the path to creating their own products and bringing them to market on a small scale.

For Andrew Bellamy, who restores vintage rangefinder cameras (ilottvintage.com), it all began with a Minolta Hi-Matic 7 that he found sitting in pieces after his father’s death. Bellamy’s father was a camera technician in the 1960s and had been refurbishing cameras after he retired. Using his father’s tools, Bellamy restored the camera, successfully shot a roll of film with it, and, he says, “got the bug from there.”

Initially, Bellamy launched the Ilott Vintage website with images and information about restored cameras “to encourage the use of film and to [champion] the quality of this generation of cameras,” but he was “inundated with requests to buy” the cameras. In 2012, he made them available for purchase online. For a unique and gorgeous modern touch, he replaces the worn leather fronts and backs  with real wood veneers, turning them into cameras unlike any you have ever seen.

Keith Canham (canhamcameras.com) fell in love with large-format photography after shooting with a 4×5 camera while at university; by 1983, he had built his own 4×5 camera. Six years later, he launched his company at the advice of Jack Deardorff (the last Deardorff family member to own L.F. Deardorff and Sons). He now designs and builds large-format cameras for other photographers, in incredible sizes such as 12×20 and 14×17.

But Canham is not the only one building cameras from scratch. About three years ago, shortly before he decided to pursue photography full-time, James Guerin built his first panoramic pinhole camera simply because he wanted to shoot images in that format. Around the same time, he was intrigued by a slit-scan photograph on Flickr, so he designed and built a slit-scan camera as well. Now he builds and sells both types of cameras (aupremierplan.fr).

Other photographic gear has gone custom, too. For bodyboarder Sean LaBrie (splwaterhousings.com), a financial incentive was the mother of invention. He made his first underwater housing in 1995 when someone told him he could earn money shooting and selling surfing imagery. After posting a housing he had made for himself on Craigslist, LaBrie got his first customer: renowned surf photographer Dave Nelson, who has been buying housings from LaBrie ever since. In 2001 this evolved into a part-time business crafting housings for some of the industry’s top surf photographers and quickly developed into a full-time venture a year later.

Some of these custom photo products are available to all, but others are more difficult to come by. According to Bellamy Hunt (www.japancamerahunter.com), MS Optical—known for hand-built lenses and lens conversions—started as “more of a hobby” for its creator Miyazaki Sadayasu, “after retiring from his previous job designing telescopes for a famous Japanese toymaker” in 2006.

Miyazaki-san’s lenses are sought after by photographers and collectors alike. If you want one, you’ll need to move quickly—the lenses are produced in limited numbers and often sell out at record speed. Lenses can be ordered from Japan Camera Hunter, where Hunt also supplies his customers with classic cameras and other products—including specially designed soft shutter releases.

Making it Work
It’s one thing to have a good or even great idea, but executing it is a whole other issue. Not surprisingly, many of the people we spoke with have specific skills that enable them to bring their concepts to life. Combined with a background in photography—and a little bit of luck—their skills helped them get to where they are today and keep them working at improving their craftsmanship.

James Guerin’s prior 15-year-long career as a mechanical engineer is a perfect example of how his experience feeds right into his pursuit of designing and building his panoramic pinhole and slit-scan cameras. “Skills such as mechanical drawing, knowledge of machines and processes, materials and project management have been a big help,” Guerin notes.

SPL Waterhousing’s LaBrie brings together his experience with watersports, photography, and more than two decades of welding to create his camera housings. “I worked on cars and bicycles when I was younger, so figuring out how to build a box [waterproof housing] came naturally,” he says.

Although not an engineer, Keith Canham has a strong background in photography and degrees in math and physics, and he apprenticed as a piano technician for three years during high school while teaching himself how to build acoustic guitars. “When I decided I wanted a 4×5 camera, I already had woodworking skills from the piano restoration work and guitar building,” explains Canham, “so I taught myself to be a machinist and built the first camera.”

Getting the Word Out
Marketing can be a challenge; sellers must reach target markets and potential customers must find the goods. But there are more ways than ever for sellers and buyers to connect; the Internet helps. For example, one might find LaBrie while browsing through surf forums to see what underwater housings watersport photographers used.

“In the beginning,” LaBrie reports, “we did not advertise. It was 100-percent word of mouth. Now we do trades [of equipment] with certain magazines for ad space,” so LaBrie reaps the benefits both of advertising and of having top photographers and editors use his equipment.

When Canham isn’t making cameras, he can often be found at trade shows like PhotoPlus Expo at the Kodak booth (he sells specialty films from Kodak to his large-format customers). This provides a direct connection to potential customers, who range from landscape to fine-art, still-life, and portrait photographers.

But Guerin is just starting out. “The biggest challenge for me is exposure,” he says. “Commercial camera-making is a new thing for me, and I’m still an unknown quantity in the photo community. That’s slowly changing as I’ve been featured on various blogs and I keep fairly active on social media.” He posts photos of his cameras as well as his pinhole and slit-scan images on Flickr so he can connect with Flickr members interested in alternative photography.

But sometimes, getting the product in the hands of influential photographers is one of the best and most direct routes to building a customer base. That seems to be true in LaBrie’s case. With so much of our day-to-day communications centered on the Internet—social media, special-interest forums, blogs, etc.—as well as fundraising sites like Kickstarter, you don’t need a huge marketing budget. All you need is a high-quality product that addresses a need, some Internet savvy, and the willingness to invest time to get the word out. And that, we think, will help talented artisans join the ranks of the ones featured here to continue to bring unique products to photographers.

Keith Canham designs and builds custom large-format cameras, and can help you get specially sized Kodak film to go with them. Photo: Lonna Tucker.