The X100 and X100s get some more reach, while the X-T1 gets gets grips and straps 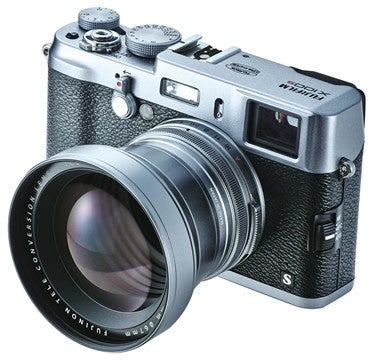 Photographers will soon have a new set of accessories for two of the most popular Fujifilm cameras around. The X100 and X100s will both get a bit of extra focal length thanks to a tele-converter lens, and the X-T1 gets a bevy of accessories to make shooting a bit more comfortable. While we don’t know prices yet for anything, they’re all expected to be available in May.

First up is the TCL-X100, a 1.4x teleconverter for the Fujifilm X100 and Fujifilm X100s. It converts the fixed-lens focal length from 35mm to 50mm (full-frame equivalent). When it comes to stores next month, it will also require the newest Fujifilm firmware to function properly.

For Fujifilm’s much praised X-T1, there’s a lot more up for grabs. The accessories include two new grips, the MHG-XT Small and Large. You can see both below, where the large adds a substantial grip to the X-T1’s body, and the small seems to just extend it down a little bit. Both grips feature unfettered access to the battery port, as well as a built-in dovetail mount. Also announced are an extended eyecup for more comfortable use, and better light isolation; a grip strap for one handed operation; and replacement port covers in case you loose yours.