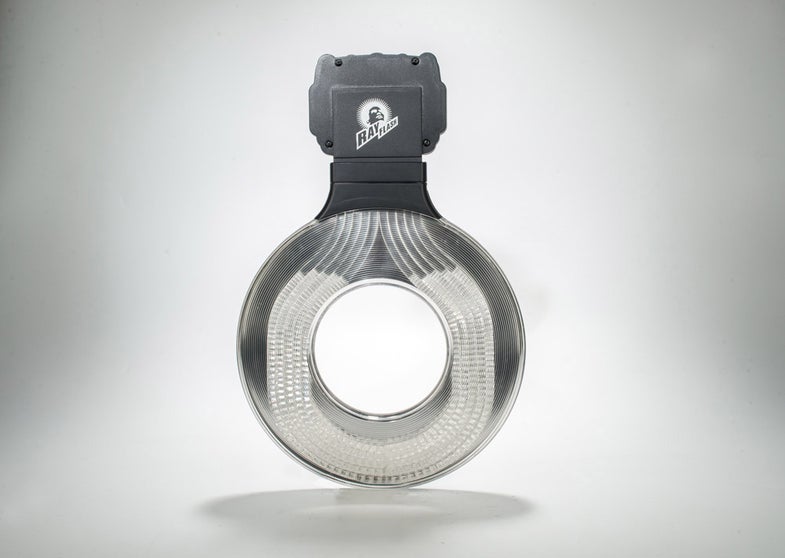 What Is It:
The Ray Flash 2 is a light-modifer that affixes to most speedlights and mimics the traditional ring light-look; it was designed by by Dalibor Zyka and is manufactured in the Czech Republic . It’s an update to the original Ray Flash, which has been on the market for several years.

Note: If video does not load, reload the page.

Why Does It Matter:
Ring lights produce a dramatic and often easy-to-identify look that many fashion photographers love. It’s a very specific effect, though, so buying a dedicated ring light can be over kill. Even the Paul C. Buff dedicated mono-ring light checks in at $400. The Ray Flash 2, at $140, is an inexpensive alternative, which is important for a modifier that likely won’t get as much use as an umbrella or a soft box.

How Does It Work:
A spring-loaded clamp grabs onto the head of your flash and holds securely in place. It couldn’t be simpler to attach. The light from your flash unit is channeled through the interior prisms and out around your lens.

_The unit on the left is the original, the one on the right is the new version. The new version comes in two sizes, we tested the larger size. _

How Does It Compare:
I have owned the original Ray Flash for two years, and virtually every downside of the first generation has been resolved.

The original Ray Flash came in several models, each of which was only compatible with a certain flash. You may notice that in the comparison photo above, the original Ray Flash has been modified around the mount. This was because I originally bought it for a Nikon SB-600, which died, and in order to use it with any of my other flashes, I had to saw it apart.

With the second iteration, ExpoImaging solved this problem by making the mounting mechanism universal for all flash heads. We tried mounting it to a variety of flashes, both large and small, and found no issues. It should be noted that while I did put a bit of gaffers tape on the unit just be sure it wouldn’t slip off, we also tried shaking a flash vigorously with the unit affixed, and still found it to hold on tight.

The images on the left was shot with the Ray Flash 2, the one on the right with the original model. Note: Both were shot using the same rig and power output settings.

The Ray Flash 2 is also made of a stronger more durable plastic, meaning if you drop it from a reasonable height, it should be able to survive. But, despite the added durability, version two is actually thinner than its predecessor.

Another advantage is the new model comes in two sizes, so whether you have a bulky pro-level or a standard DSLR (or an interchangeable-lens compact camera) you’re covered. The physical dimensions of the ring portion on the two models are actually the same, it’s the distance between the mount and ring that varies. Even better, that space is adjustable; the smaller model offers a range of 6.3-6.9″ while the larger one offers a range of 6.9-7.5″. You can see a demonstration of how those adjustments work in the video above.

Another interesting note: Compared to the original model, the Ray Flash 2 is 2.4 oz. heavier, coming in at 16oz.; it’s outer diameter is about 5″ wider too.

From our initial field test (see the side-by-sides above) the Ray Flash 2 appears to be slightly more efficient at channeling light. To make sure, I set up a quick test. We set a light meter exactly 3 feet away from a Lumopro LP-180 flash unit, set to full power at bother 24mm and 50mm. I then set our lightmeter to ISO 100 1/60 sec and tested each Ray Flash unit, giving the flash 30 seconds between each firing to charge back up.

This image demonstrates the effects of the Ray Flash 2’s catch light in the eye of a subject. This photo was shot vertically, and from this zoomed-in view of the eye, it’s pretty clear that the light doesn’t go all the way around the ring.

The Downside:
For some, the $140 price tag may seem a bit steep, especially when you can get a generic ring-light adapter on eBay for less than $50, but the extra money here is paying for more efficient light transmission, sturdier construction, and a company that will actually give you customer service should you need it. That’s a pipe dream for most eBay sellers.

Another disavantage of the Ray Flash 2 is that the light is not perfectly distrubuted, as the above image shows. This can mean a less than perfectly-circular catch light in the eye, but that’s likely going to be true with most adapters.

And while the Ray Flash 2 does seem more efficient than its predecessor, it’s still never going to be able to compete with a dedicated monolight version of a ring light. If you need a lot of power for something like a photo booth or an outdoor portrait session, you might need something that plugs in.

What Is This Thing?
The Ray Flash 2 comes with a peculiar black rubber loop (see above). It took me a second to figure out what it is for, but it’s use is quite brilliant. You essentially put it in the joint of your flash head, and use it to prop up the Ray Flash 2 Unit so that it doesn’t sag down. The rubber loop has 3 different thicknesses too, so you can get it just right.

Conclusion:
The Ray Flash 2 is a solid improvement on the already very popular original Ray Flash, which up until now, I considered to be the best-in-class when it came to ring light-like modifiers. Compared to other models like the Orbis Ring Flash, the simplistic mounting solution alone is enough to give it a substantial edge. So if you are in the market for a solid ring-light flash accessory, and don’t mind throwing down a bit of cash, look no further than the Ray Flash 2.