Add the ability to mount Nikon, Olympus, Contax/Yashica, and Konica lenses on your K-mount camera 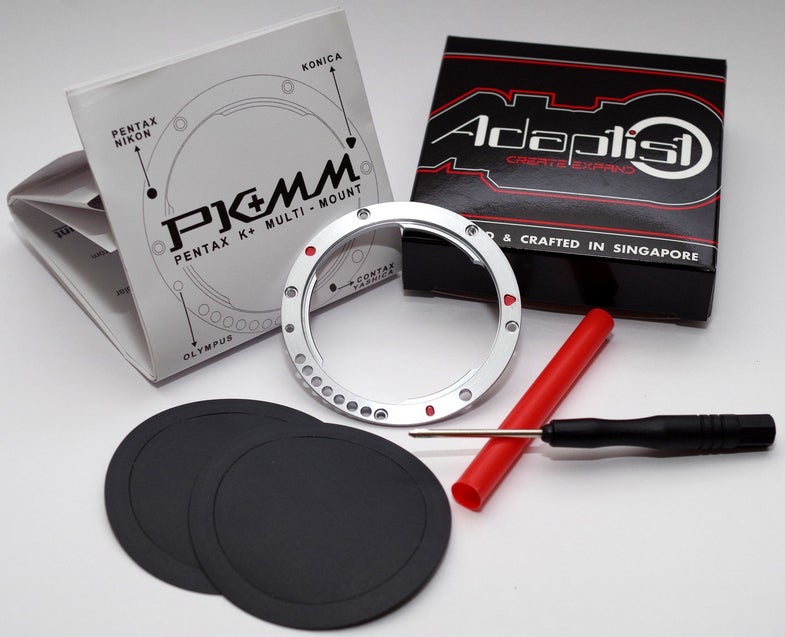 The PK+MM Mount would do something pretty remarkable to a wide range of Pentax DSLRs—it would give you the ability to mount hundreds of other lenses, by totally replacing the metal mounting plate for one with greater compatibility. The PK+MM mount transforms just about any K-mount camera into one that can also handle Nikon F, Olympus OM, Contax Yashica C/Y, and Konika AR glass.

The PK+MM Mount has an asking price of S$98, around $78USD. It’s a small metal ring that you use to replace the metal mount that’s usually on your camera—meaning that if you ever want to, you can just swap it back for the original.

Since the mount contains no optical elements, there’s no degradation in image quality, and you’ll also get the ability to focus to infinity with many lenses. But, there are a relatively sizable number of other caveats. As you might guess, the lenses have to be used entirely manually—there’s no AF or electronic aperture control. Nikon lenses have to be used with a mounting shim to adjust the distance slightly to use them accurately; OM mount lenses need to be fixed at maximum aperture to work properly; Konica lenses can’t focus to infinity; and C/Y lenses need a slight modification removing part of the aperture lever to fit properly. Also, it won’t work with weather sealed Pentax cameras, though there is a variant for that in the works.

All told, that’s a lot of fiddling to get everything working properly—but the results seem pretty impressive. And it would be a way of opening up your camera to decades of glass, many of which is available for very affordable prices.