A super-fast drive for Mac users 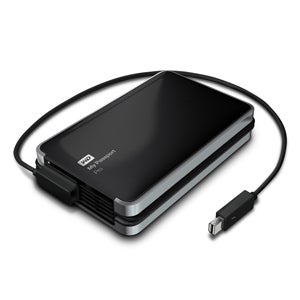 Western Digital has announced the My Passport Pro, a petite, Thunderbolt powered, dual-drive system, capable of being set up for either RAID 0 or RAID 1, depending on your need for more space or more stability. Billed as the “first Thunderbolt-powered portable dual-drive“, it requires no extra cords or cables, with just a single Thunderbolt port for connectivity and power. But, since it’s Thunderbolt only, that means it’s Mac only, too.

The My Passport Pro comes with an integrated Thunderbolt cable that wraps around the body when not in use, making it an entirely self-contained unit. It’s available in both 2TB and 4TB capacities, and is capable of speeds up to 233 MB/s and 230 MB/s respectively. With its dual-drive setup, the My Passport Pro can be either setup for RAID 0 (data striping) for high speed, or RAID 1 (mirroring) to keep a constant backup. So you can opt for either faster performance, or data redundancy in case one of the drives suffers a problem.

The drive is available through Apple stores, Western Digital, and the usual electronic outlets. The 2TB version will set you back $299.99, and the 4TB $429.99