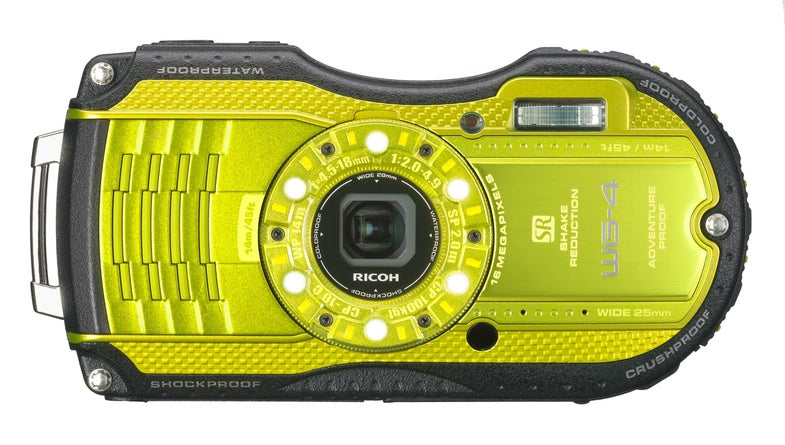 You’re probably used to hearing about the Pentax WG-series rugged cameras, but now they fall under the Ricoh name and they have gotten some serious upgrades.

The WG-4 and WG-4 GPS (guess what the difference is) represent the top end of the rugged WG line. Like the cameras that came before it, it has an array of six LED lights surround the lens (in addition to the built-in flash) for macro illumination. The sensor is a 16-megapixel backside illuminated CMOS that has sensor-shift image stabilization.

The body is waterproof to 45 feet, shockproof from 6.6 feet and can survive cold temperatures down to 14-degrees F. The lens is a 4x (25-100mm equivalent), which is pretty standard at this level. It will be available in March for $329 or $379 if you want the GPS model. They’re also releasing an array of mounting options that make this a more direct competitor with pure action cameras like the GoPro.

The WG-20 is the entry-level rugged camera that’s waterproof to 33 feet, shockproof from 5-feet. It has a CCD sensor with 14-megapixels of resolution, but it has a 5x optical lens zoom starting at 28mm.

It’s nothing groundbreaking, but it will be available for $199, which is a benefit for a rugged camera that may be put in danger out in the field.