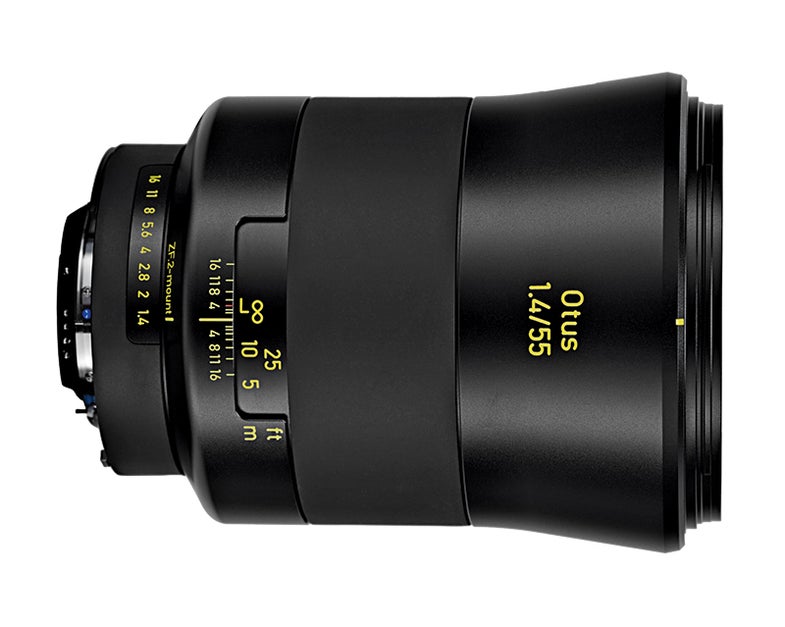 With its Otus 55mm f/1.4, Zeiss continues its recent practice of giving its lenses avian appellations. The APS-C Touits are named for a parrot, and Otus is a genus of owls.
SHARE

The Zeiss Otus APO Distagon T* 55mm f/1.4 ZF (Nikon) and ZE (Canon) large-aperture, full-frame normal lenses are the largest and among the most expensive lenses in its class. While the $3,999 street price induces sticker shock, it calmed us to recall that it still costs several hundred dollars less than the comparable (but much smaller) Leica 50mm f/1.4 Summilux-M. Justifying its expense, the Zeiss offers an aspheric element for edge sharpness and expensive low-dispersion glass used to control color fringing.

In the hands, this all-metal, manual-focus lens is positively massive. It weighs more than twice the average for a full-frame 50mm f/1.4, heavier even than some tele primes. Whereas most 50mm f/1.4s take 58mm filters, its threading is for 77mm filters. The finish is a silky matte black.

In field tests, we liked the very long manual-focus turning radius for its precise (if not speedy) focusing. Like all f/1.4 glass, because its depth of field is so shallow, it can be difficult to get (and keep illuminated) a camera’s focus-confirmation alert. Its smooth, rubberized manual-focus ring turns easily and evenly, and its subject distance scales are bright yellow and large enough to read from across the room.

On our optical bench, the Otus offered the highest SQF numbers of any of the six recently tested Zeiss manual-focus primes. Similarly, it outdid all comparable recently tested autofocus lens except the Sigma 50mm f/1.4 EX DG, which edged its way past the Otus to the top of the sharpness hill for normal lenses. The manual-focus Leica 50mm f/0.95 Noctilux-M similarly edged the Otus slightly in SQF, but you’ll pay $10,000 for one of those puppies.

In DxO Anaylzer 5.0 tests of distortion control, however, this Zeiss reigned supreme. It topped the Canon, Nikon, Noctilux-M, Sigma, Sony, and other Zeiss 50mm f/1.4s by a level of magnitude. The Otus’s barrel distortion numbers fell in our top Imperceptible range; all the others produced Slight-range distortion. Vignetting to f/2.5, the lens also outperformed all other (tested) 50mm f/1.4s in edge falloff, with the exception of the Zeiss Planar T* 50mm f/1.4, which showed vignetting only to f/2.

Obviously designed for superior sharpness and contrast, without regard to size, weight, or price, this lens is among the most impressive glass ever mounted on Popular Photography’s optical bench. The Zeiss Otus 55mm f/1.4 is a rare bird; one that­­—even without autofocus—could attract and then faithfully serve any Canon or Nikon photographer.