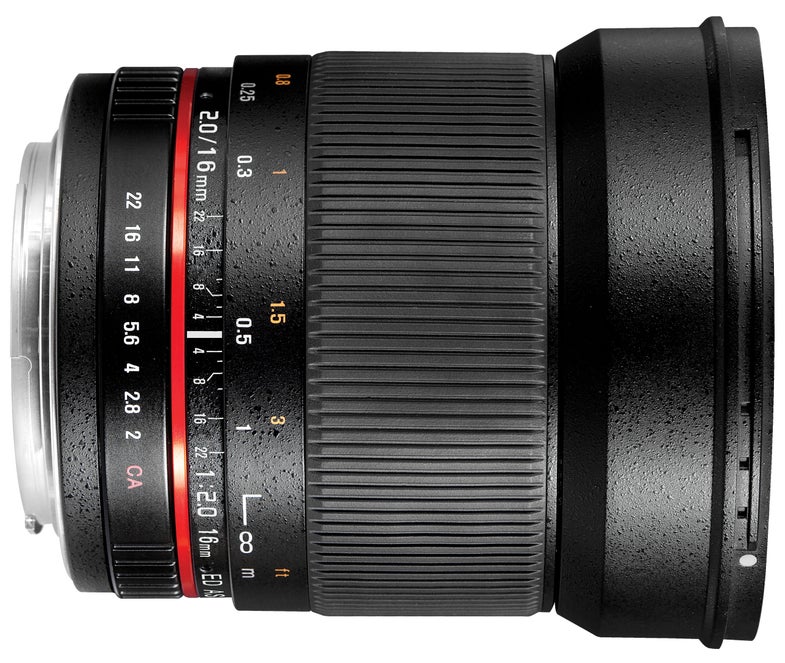 An aperture ring lock on the Nikon version of this lens was especailly missed because our test camera, the Nikon D5300, required the lens' minimum aperture be set for all exposure modes, including manual.
SHARE

The Rokinon 16mm f/2 ED AS UMC CS for APS-C bodies—the CS stands for “cropped sensor”—is made by the South Korean firm Samyang, which manufactures lenses under several different brand names. This high-speed ultrawide is available in 10 (!) different mounts, with street pricing that ranges from $449 to $499, depending on the mount. It joins a growing line of nearly a dozen Rokinon high-speed, manual-focus primes that include additional ultrawides, fisheyes, standard-range teles, tilt/shift, and cine lenses.

Although it has no autofocus motor, the Nikon-mount Rokinon 16mm f/2 we tested is by far the largest lens of tested digital-only ultrawides, including the Fujifilm 14mm f/2.8, Pentax 14mm f/2.8, and Zeiss Touit 12mm f/2.8, all autofocus lenses. At about 3.4 inches, the Rokinon is about an inch longer than the Fujifilm and Zeiss, and a full pound heavier. Instead of the 58mm or 67mm filters of the Fujifilm and Zeiss lenses (respectively), the larger and faster Rokinon 16mm f/2 takes 77mm filters, more like a full-frame ultrawide. As you would guess, the Rokinon is big enough to cast a shadow at closer focusing distances when used with an on-board flash.

Cosmetically, the lens boasts a nice, matte-black, stippled surface. It handles well, with a perfectly damped turning action for the large manual-focus collar of ribbed rubber. The collar’s long turning radius allows for precise, if not rapid, focusing, and its body markings, including an unusually complete (f/4 to f/22) depth-of-field scale, are bold and easy to read. For our test lens, we would have liked a minimum-aperture lock on its aperture ring and a moisture-resistant O-ring on the metal lensmount.

In the Popular Photography Test Lab, the lens produced Excellent SQF numbers in the low-90th percentile. The performance is similar to the other lenses mentioned here. In DxO Anaylzer version 5.0 tests, we found Visible barrel distortion (0.34%)—similar to the Pentax, but not in the same league with the Fujifilm or Zeiss Touit, which showed 0.02% and 0.04% Imperceptible pincushion, respectively.

A clearly well-made lens that provides a useful wide angle of view and high speed, this ultrawide is sure to please anyone willing to forgo autofocus. While it lacks the stellar distortion control of lenses like the Fujifilm 14mm f/2.8 or Zeiss Touit 12mm f/2.8, it’s also nearly $400 less expensive than either of those superstars.