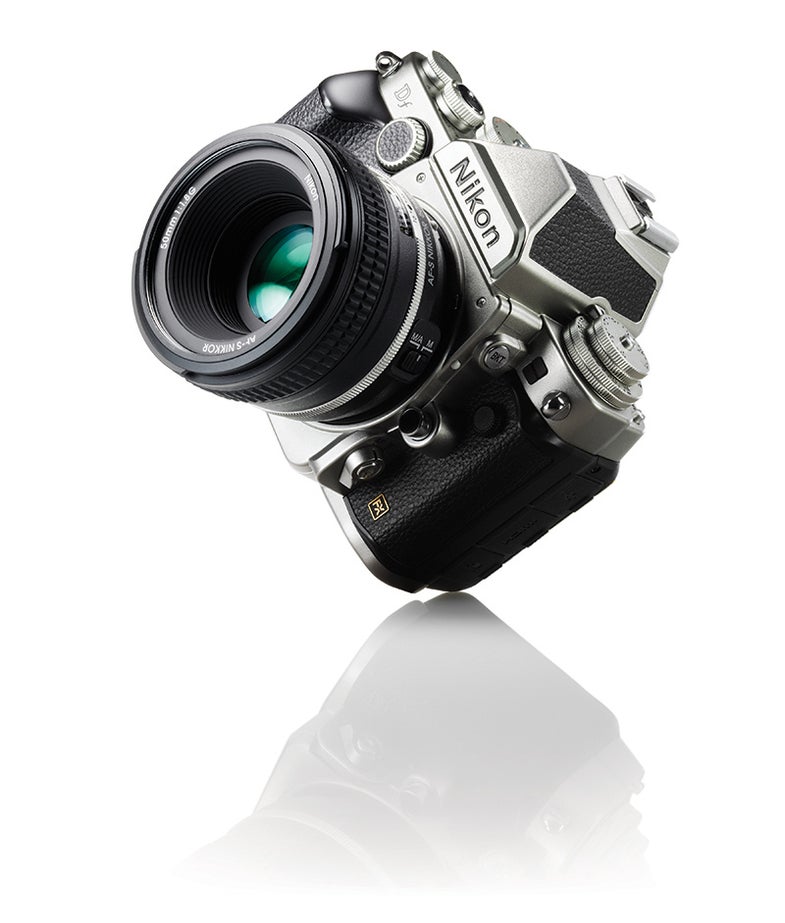 Up until now, the retro camera trend has been limited to compacts (fixed- or interchangeable-lens). With the new Df, Nikon brings classic styling to a DSLR. The two-toned, black-and-silver (or all-black) body is fairly bristling with physical dials, evoking yesteryear with aplomb, yet the imaging engine is the same as that found in Nikon’s full-frame flagship D4. But unlike the D4, the $2,747 (street) Df won’t capture video. How’s that for retro?

While the Df’s 16.2MP sensor captured barely enough resolution to earn an Excellent rating in our test, it held onto its resolving power quite steadily up to ISO 800. This, combined with stellar noise performance and very accurate color reproduction, made for an overall image quality rating of Excellent from ISO 50 through 800.

Above that, Nikon labels sensitivity H1 through H4, corresponding to ISO 25,600 through ISO 204,800. With these, Nikon indicates that image quality will decline past standards the company has set for itself. And indeed, resolution drops off more sharply here: from 2275 lines at ISO 25,600 through 1700 lines at the top sensitivity of ISO 204,800. Quite a decline; yet very few cameras can even capture at such high ISOs.

Noise suppression proved to be a big strong point for the Df. The camera earned our top rating of Extremely Low from ISO 50 through ISO 800, and it didn’t reach an Unacceptable level until ISO 12,800—and even then, just by a hair. We captured many images during our field testing at ISO 12,800 that could be turned into pleasing prints and would be great for sharing online. Even at ISO 51,200 or 102,400, you’ll be likely to get images usable for sharing through social networks, depending on the content of the scene.

While the Df’s imaging closely matches that of the D4—with even less noise at ISO 1600 and under—autofocus is more in line with the D600, Nikon’s consumer full-framer, now replaced by the D610. (No surprise, since the two both use Nikon’s Multi-CAM 4800 system.) At the brightest point in our test, the Df locked focus and captured an image in 0.46 second. There are certainly faster-focusing DSLRs, but this is still pretty quick and didn’t pose a big problem during field testing. AF didn’t slow very much until the light became dimmer than EV 6—roughly the equivalent of a well-lit room. The Df was able to focus and capture in under a second until the moonlight-like dimness of EV 0. Nikon rates the Df’s AF as effective only down to EV –1, and this proved to be true in our test.

Often during our field testing, strangers and friends asked if the Df was a film camera. We reinforced this impression by shooting with an old non-AI 50mm f/1.4 Nikkor, but the Nikon Df does evoke the film SLRs of the ’70s. People most often compare the look of the Df to that of the Nikon FM. (Of course, the FM didn’t have a front-mounted command wheel, since you’d adjust aperture with that thing on the lens called an aperture ring.)

Also unlike the FM, the Df has a nice little half-grip for your fourth finger and pinky. This lets you use a front-mounted dial with your middle finger while keeping your forefinger on the shutter release at all times, unless you screw a mechanical cable release (really!) into the button to trip it remotely. We applaud the grip design but, as usual, we suggest an improvement on the next version: a slight recess for the fingertips to hold it more securely.

When we first held the camera, we tried to adjust the front-mounted wheel with our index finger, but quickly found that it’s much better to turn it with the middle finger and dedicate the index finger to the shutter release. After so many years of using buttons, command wheels, little joysticks, and dashboard-style displays on LCD screens to change DSLR settings, it took a little practice before using the Df’s many dials became second nature. Then we recalled what we love about dials: You can adjust them without having to turn the camera on, and check all your settings when the camera is off. Dials also make it easier to change settings without looking—a few click-stops around will get you any setting you want.

It’s pretty easy to use older lenses on the Df. Nikon’s Automatic Maximum Aperture Indexing (AI) system, introduced in 1977, uses a ridge on the rear of the lens barrel to engage a coupling lever on an AI camera. On early AI bodies, this lever was retractable, but not on later ones, causing damage with non-AI lenses. But on the Df the coupling lever retracts, letting us use our non-AI 50mm f/1.4.

For a correct meter reading with such a lens, you set your aperture using the front command dial and turn the aperture ring on the lens. This adds a step in shooting, but it opens up lots of fun lens options for the Df. Indeed, with any lens without electronics (a.k.a. non-CPU lenses), you’ll also have to give the Df some information so the meter functions properly: In the setup menu, select Non-CPU Lens Data and input the focal length, maximum aperture, and whether it’s an AI or non-AI lens. It stores info on up to nine such lenses.

After focusing manually with our old lens, we yearned for a split-image focusing screen—alas, there is no such option for the Df. Switching back to a current lens, we enjoyed the Df’s 3D tracking autofocus, which kept up well with the camera’s 5.5-fps burst speed. You can shoot up to 25 uncompressed 14-bit RAW frames, 21 full-size TIFFs, or more than 100 JPEGs per burst before the buffer fills. Too bad the Df has only one SD card slot. For a camera at this price point, with these capabilities, two slots would make more sense.

If you have a stash of older Nikon glass, especially non-AI lenses, the Df is pretty much your only DSLR option without having your lenses modified. If you don’t have old glass, you may be better served by the D610, which will save you enough money for another lens. Of course, that means you’ll miss out on the Df’s unique style—but only you can decide how much that matters to you. Suffice it to say that this still imaging machine has all the flair and prowess most advanced enthusiasts could ever want.