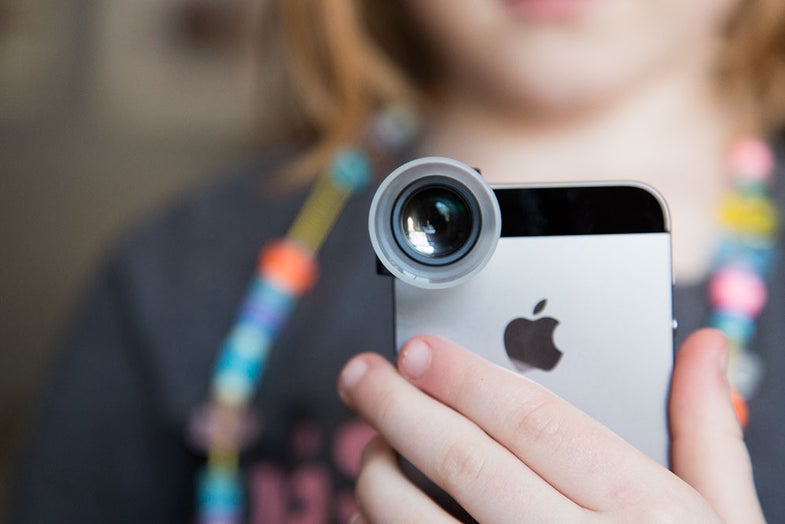 In the past, I’ve wrestled with my opinion of smartphone camera add-on lenses. On one hand, they give you more photographic options, which is almost always a plus. On the other hand, carrying around an extra piece seems to subvert the simplicity of smartphone photography, which is, in my opinion, its greatest strength. Since I picked up the Olloclip Macro back at CES, though, I’ve been very impressed with not only how well it performs, but how willing I’ve found myself to actually carry it around.

What is it?
The Olloclip Macro is a small clip that attaches to the iPhone, placing optics over the built-in camera, giving it impressive macro capabilities. There are three different configurations, giving you 21x, 14x, or 7x magnification.

In addition to the optics, you also get caps for the glass, a carrying bag, and in the case of the Macro, translucent plastic hoods that hold the lens the proper distance from your subject to achieve optimal focus.

Using it
The Olloclip concept really couldn’t be simpler. A metal bracket has a lens on each side. When you slide the bracket over the corner of the phone, the optics line up the iPhone’s built-in camera. One of the drawbacks is that it’s not really compatible with any phone case beyond the Olloclip case, which isn’t the most protective thing. So, if you’re using some kind of protective case, you’re going to have to take it off before you get down to macro business. I actually didn’t find this nearly as annoying as I thought I would.

Carrying it around is pretty simple, too. It takes up more space than the smaller Olloclip because of the translucent hoods, but even still, it’s less cumbersome than a typical lipstick. I had no problem sticking it in my jacket pocket where it has lived ever since. If I had a purse, it wouldn’t be an issue at all. A fanny pack would also work, but, well, you know…

Image Quality
I didn’t go in expecting greatness. After all, we’re adding more glass into the equation here and pushing a tiny camera past its usual capabilities doesn’t always produce excellent results. But overall, I was impressed with the images I’ve gotten out of the Olloclip.

I immediately started with the highest magnification lens, which is 21x. I’m not typically a macro shooter, so its ability to get this close isn’t something I’m used to. Because it’s so close, the depth of field is still very narrow, despite iPhone’s small sensor. You can see very clear distortion and (sometimes substantial) softening at the edges of the frame, but the center stays fairly sharp. If you go in expecting DSLR-like results, you’ll be disappointed. But, if you consider how far you’re pushing a lens that little, the results become more impressive. The technical shortcomings fall to the wayside in the wake of new photographic opportunities.

At 21x magnification, you get into microscope-like territory. You’re so close to most objects that they’re rendered simply as patterns created by the textures of their surfaces. It’s addicting. I showed my kids and they were enthralled, wanting to take a close-up look at just about everything.

At 14x and 7x, the edge distortion and softness lessens, but it’s still certainly noticeable. The fisheye effect is correctable in software, but since I found myself sharing most of the photos via Instagram, the square crop did away with most of the wonky edges anyway.

It’s important that you keep the actual lens bracket in the correct spot. It can slip a little when you’re using it and if it’s not totally centered, the distortion gets out of hand rather quickly.

What’s good?
The only other macro lens I own fits my film camera and doesn’t often see the light of day. Using this little $70 add-on, however, quenched my casual macro cravings with no problem. Is it a tool for serious macro work? Probably not, but in a landscape that’s literally bombarded with smartphone photos, this let me make images that stood out.

It’s small, light, easy to use, and the translucent hoods even make it simple to keep things steady and blur-free, which is not typically an easy task. The high-quality glass didn’t improve optical performance, but it also didn’t ruin it, which is as much as one can ask from a smartphone add-on.

What’s not good?
As I mentioned before, attaching the lens does add another step to the smartphone photography process. Also, carrying it around isn’t overly convenient unless you have a jacket with a pocket or a purse. I wouldn’t be surprised to crack one of the hoods after a couple weeks of pocket transportation. In a way, you have to change the way you shoot to accommodate the lens, but as a result you get pictures that wouldn’t otherwise be possible, so you have to weigh the tradeoff.

It’s also very small. In some ways, that’s a plus, but some of the pieces seem like they may be easy to lose in the long run. The 14x optic screws off and is roughly the size of a dime, so if it gets loose in your pocket, that may be it. Not a deal breaker, but something to keep in mind in case you’re the disorganized type (which I am).

Should you buy it?
If you’re thinking about investing in a nice 100mm macro for your DSLR, this isn’t going to replace it. But, if you’re curious about close-up photography, this is a great way to get your feet wet. If you’re sharing a lot of images online, the softness and distortion likely won’t even be apparent.

And if you’re chasing after “likes” online, the uniqueness of the images will likely deliver all the adoration your internet ego desires. Just don’t overdo it. 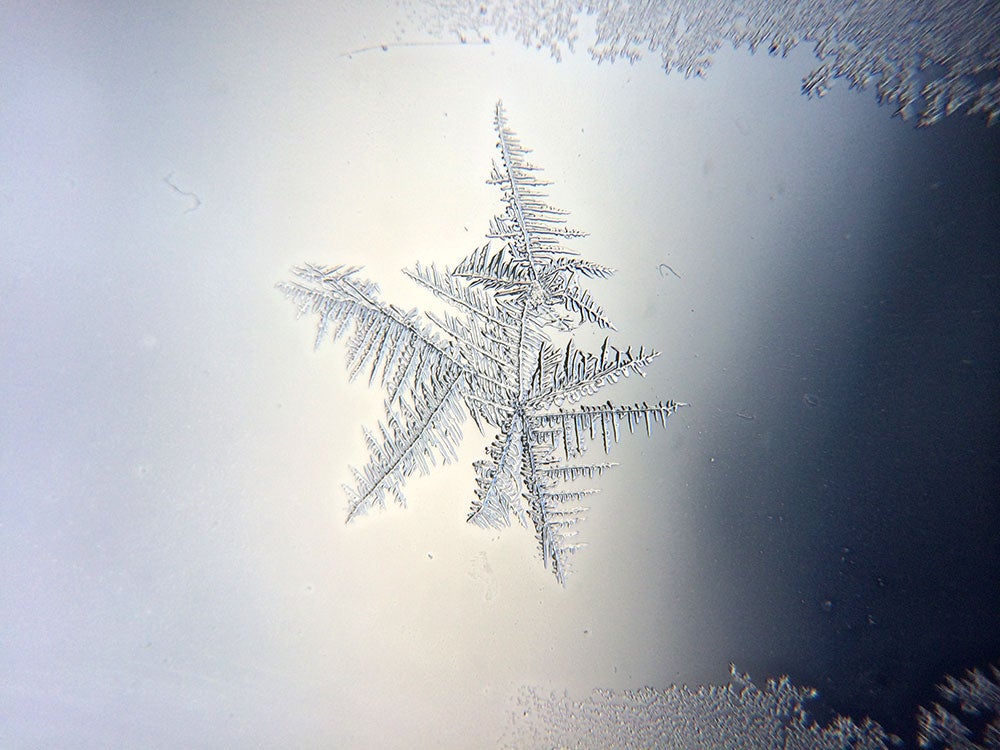 A close-up of ice crystals on a window using the 21x optics and then collar. You can see that the center of the frame is fairly sharp. 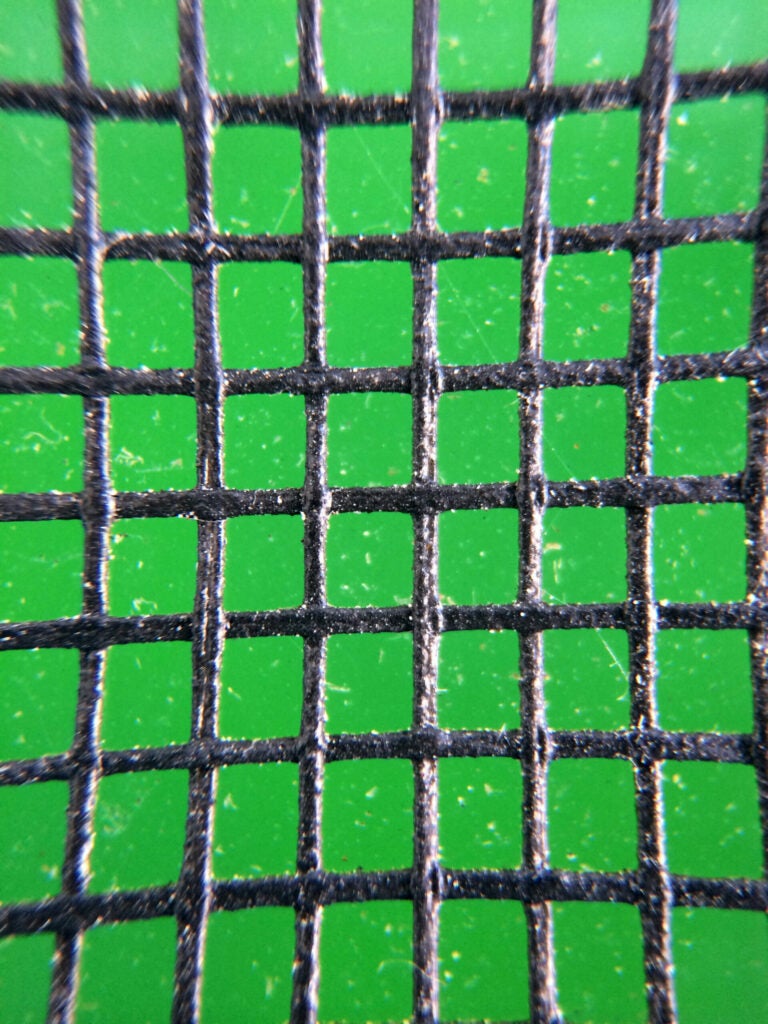 A typical screen from a porch door with the 21x optic. This gives you a good idea of how much distortion you get at the edges with the highest magnification. 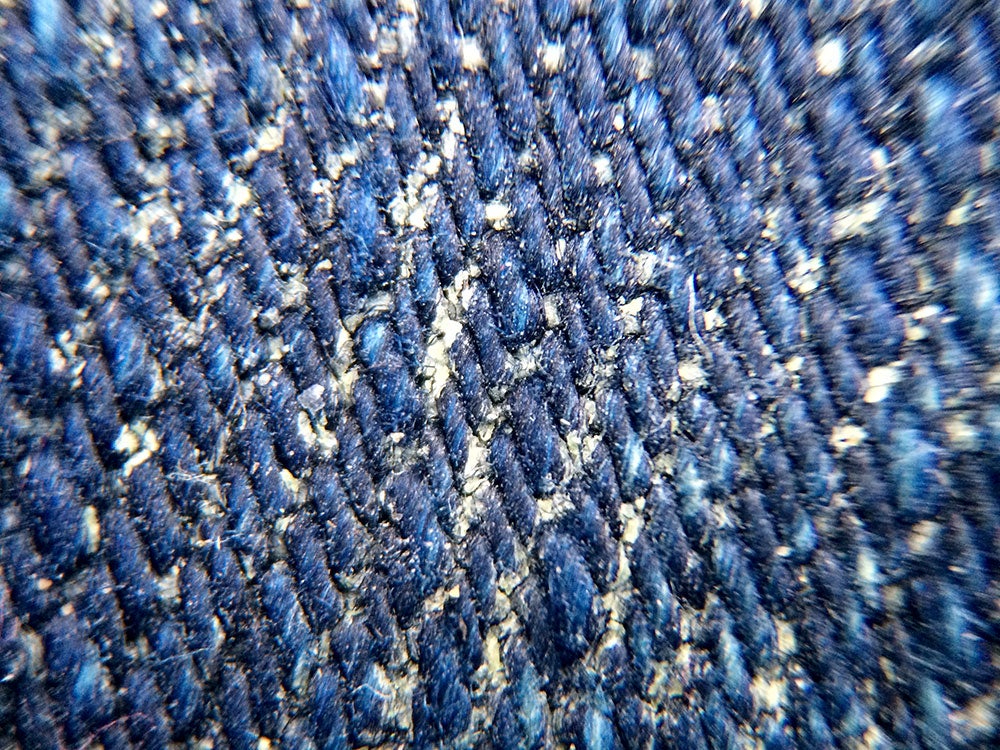 At 21x, you really are getting very close. This macro shot of jeans reveals texture that’s not otherwise visible. 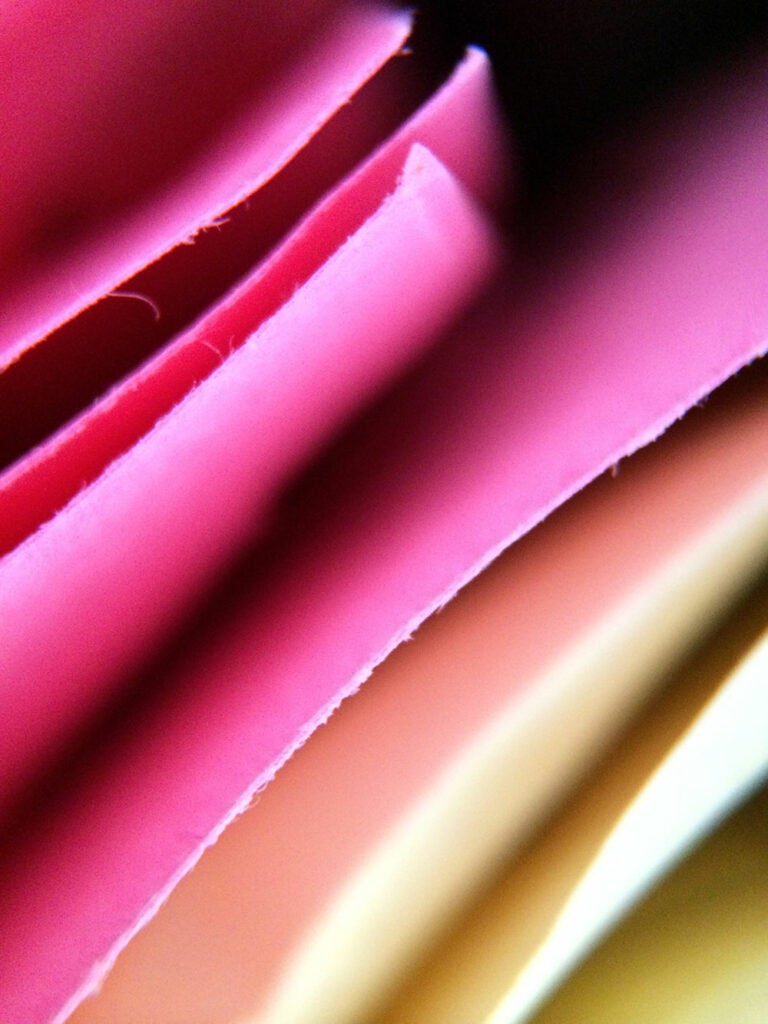 A shot of some sugar packets using the 14x optic. You can see just how shallow the depth of field is when you get up this close, even with the iPhone’s small sensor. 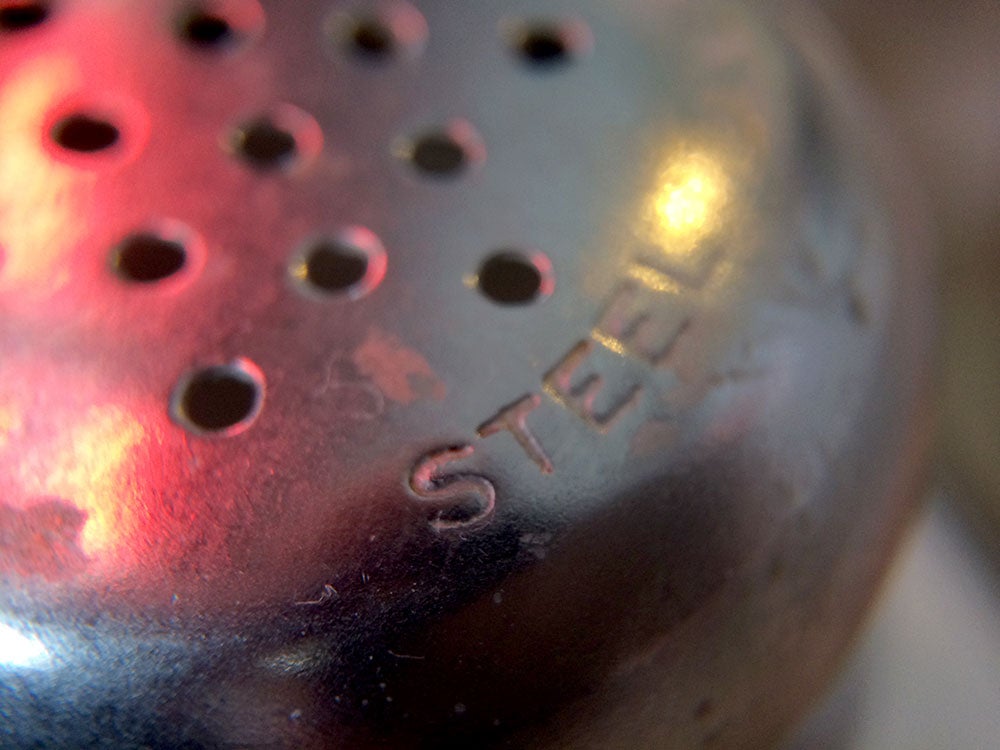 Another example shot with the 14x optics, this time of a salt shaker. Once again you can see the shallow depth of field. It actually throws some pretty nice bokeh. 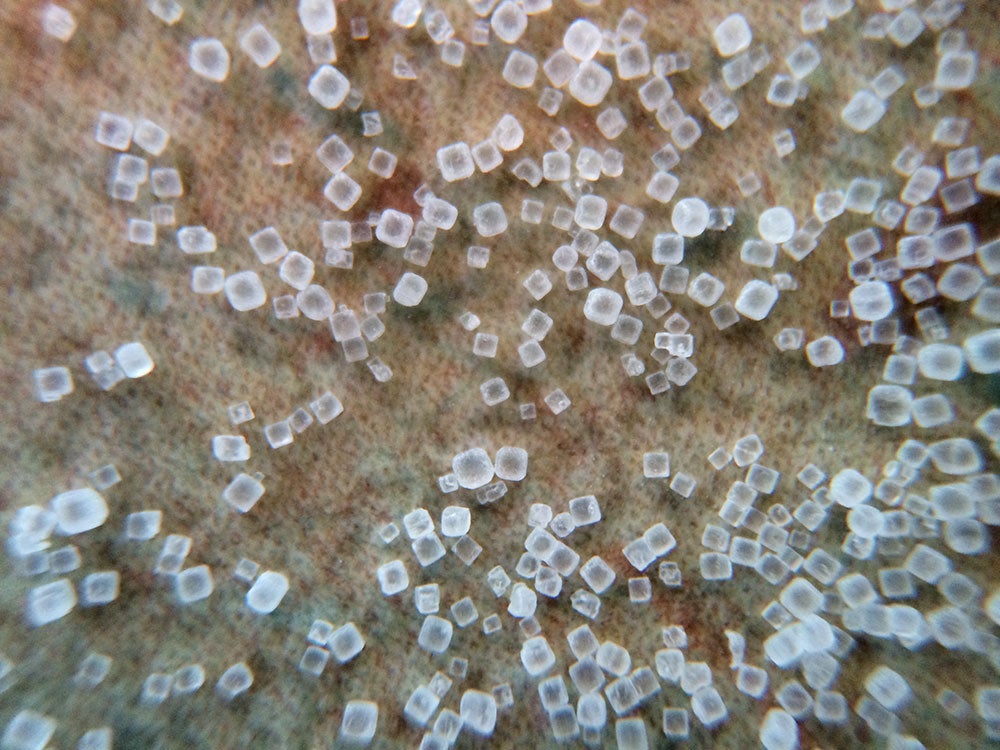 Generic table salt photographed with the 21x optic. You can see that it’s a victim of camera shake, which isn’t uncommon when getting up this close. 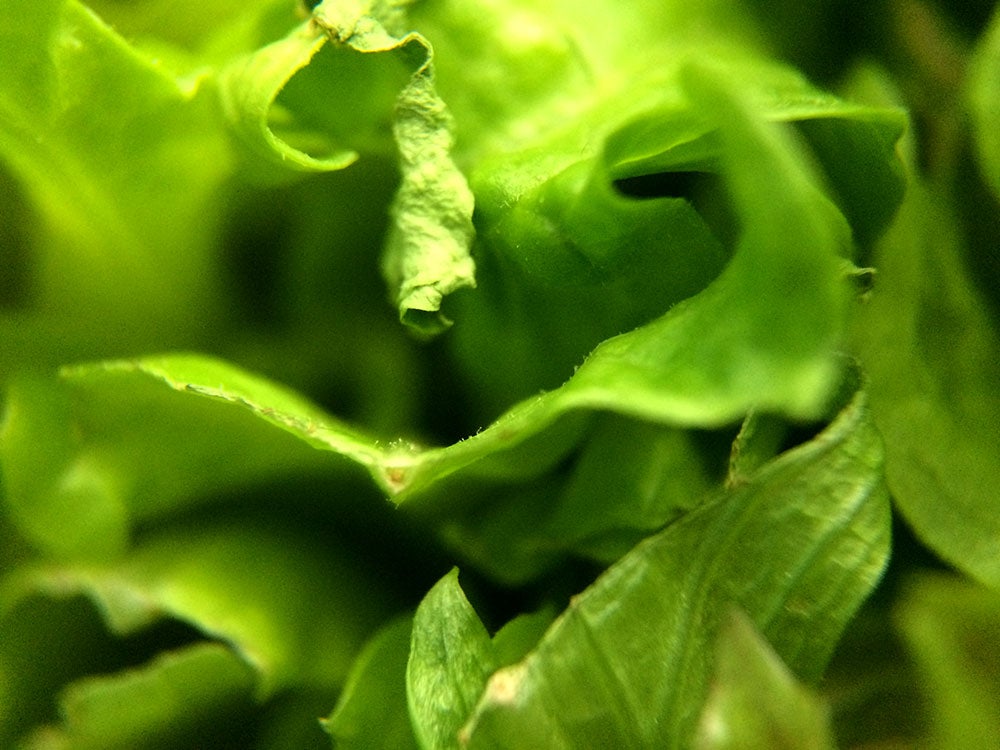 This lettuce shot with the 14x optic was tricky to get. The depth of field is so shallow and holding the camera still is tricky, so you have to do a little trial and error before things look just right. 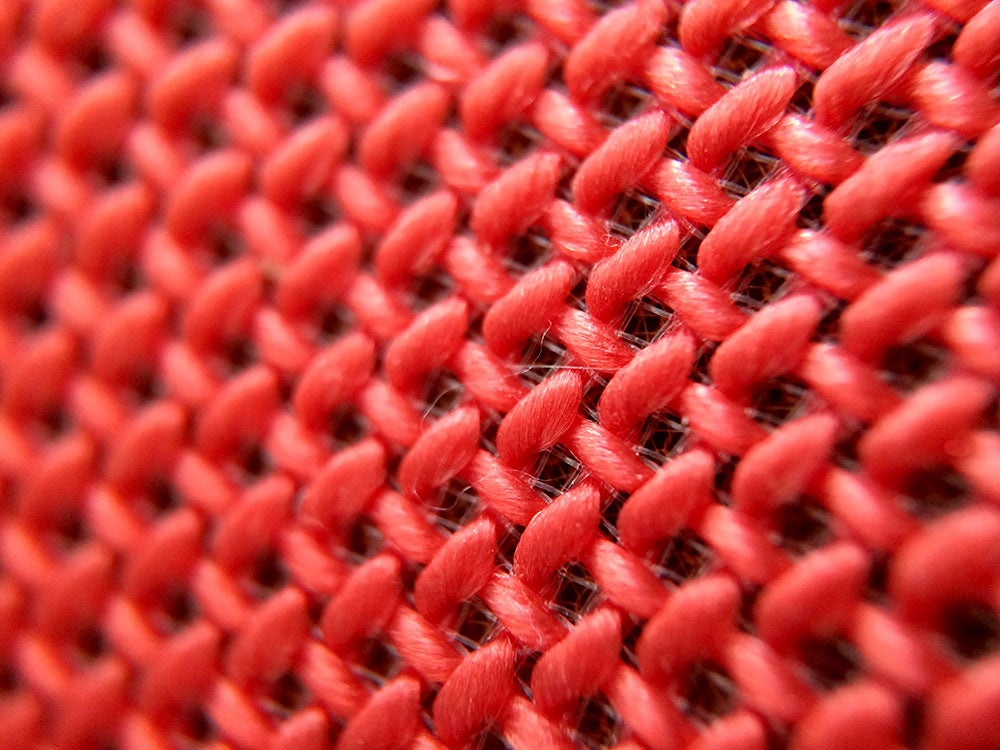 This abstract of a speaker cover shows what happens when you switch up the angle of the 21x optics. When you’re not shooting straight on, you can get a better idea of how narrow the depth of field really is. It also helps that the iPhone loves to shoot pretty much everything at F/2.2. 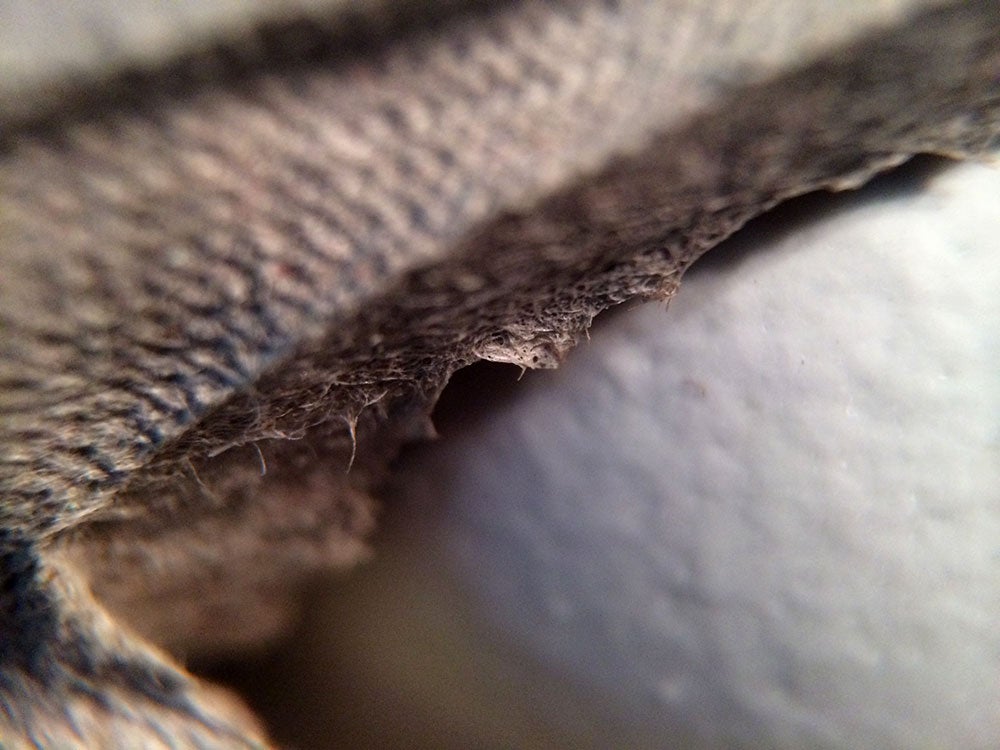 Could you tell this was an egg carton without looking at the title? Probably not. At 21x magnification, like I said before, things tend to get very abstract. This was shot with the 14x optic and you can once again see where the sharpness begins to fall off. But, as long as you keep your subject near the middle, it looks fine. 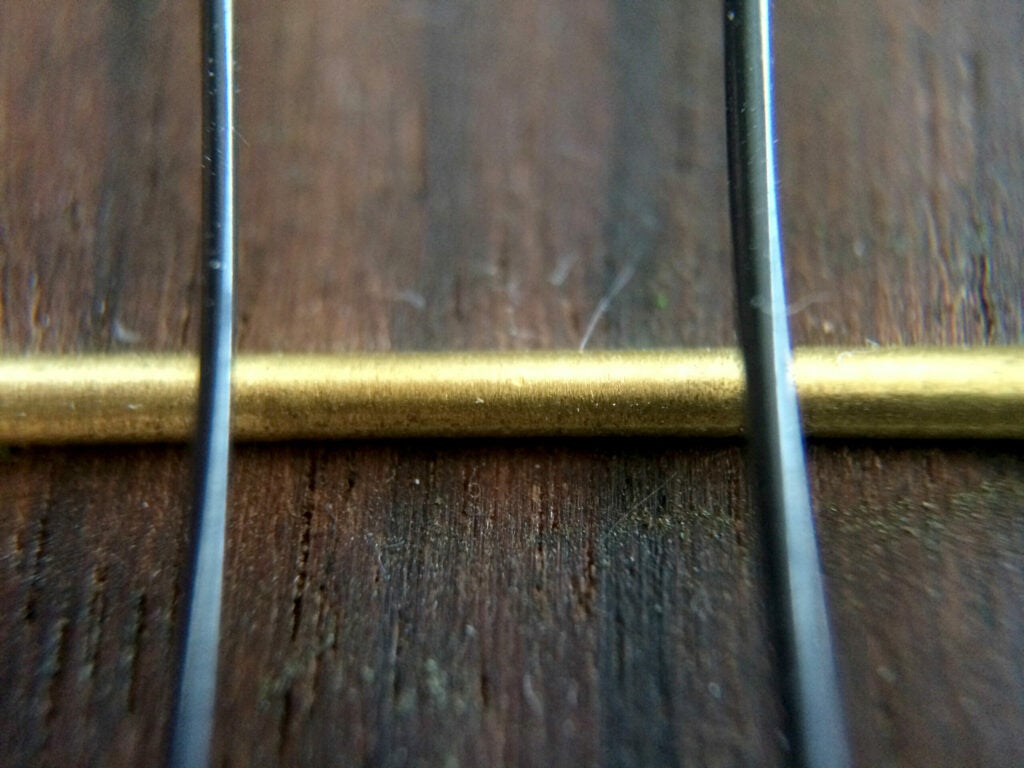 Another example of the 21x optic shot from an angle. 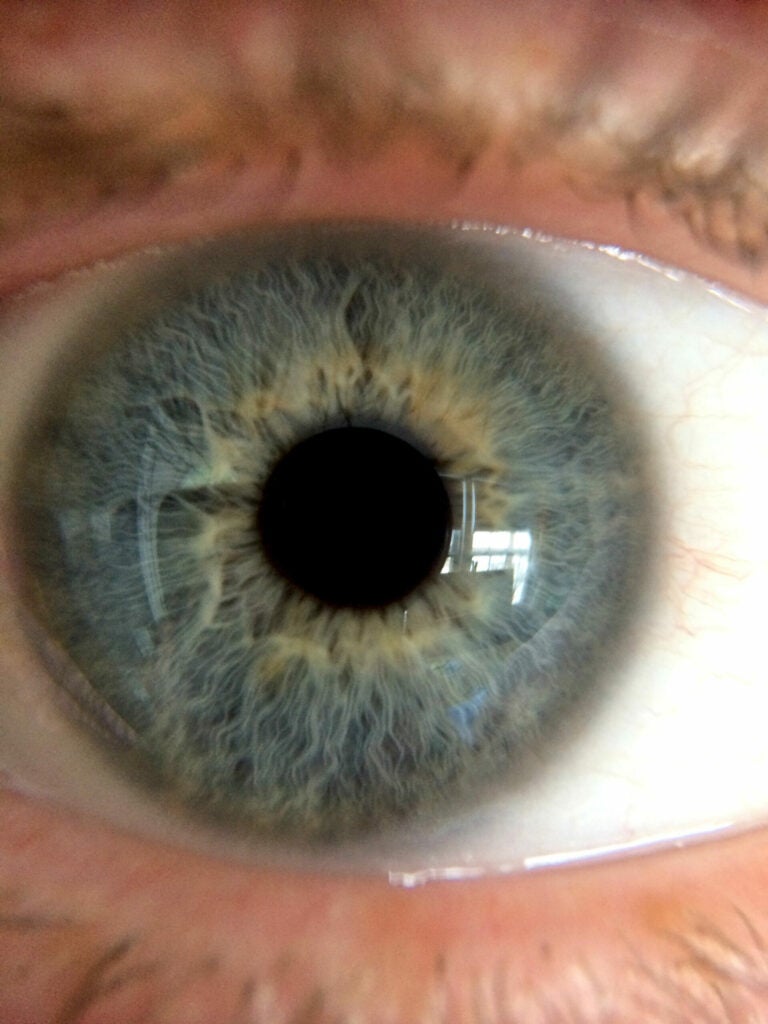 This eyeball selfie was shot with the 14x optic because it’s easiest to hold in front of your eye without mashing down your eyelashes. This one was particularly tricky because I couldn’t actually see what I was shooting. Still, it’s not a bad frame considering the means of taking it. 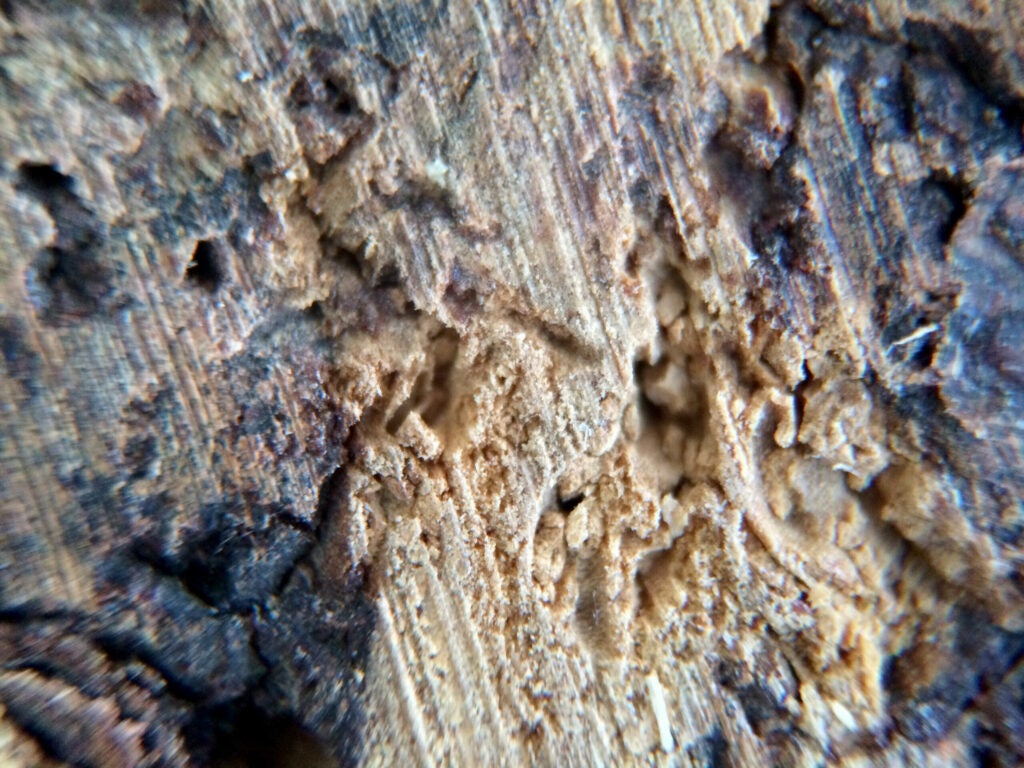 A close-up of a knot in a piece of sanded plywood taken with the 21x optic. 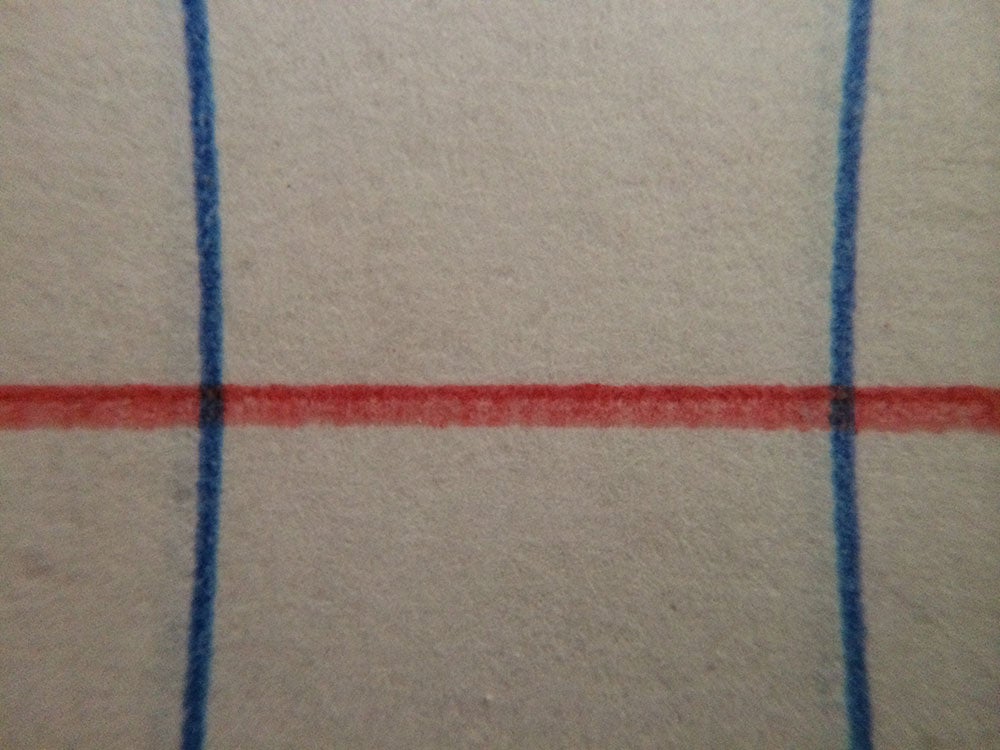 A standard piece of lined paper taken with the 21x optic. See the next two slides to see the difference in magnification. 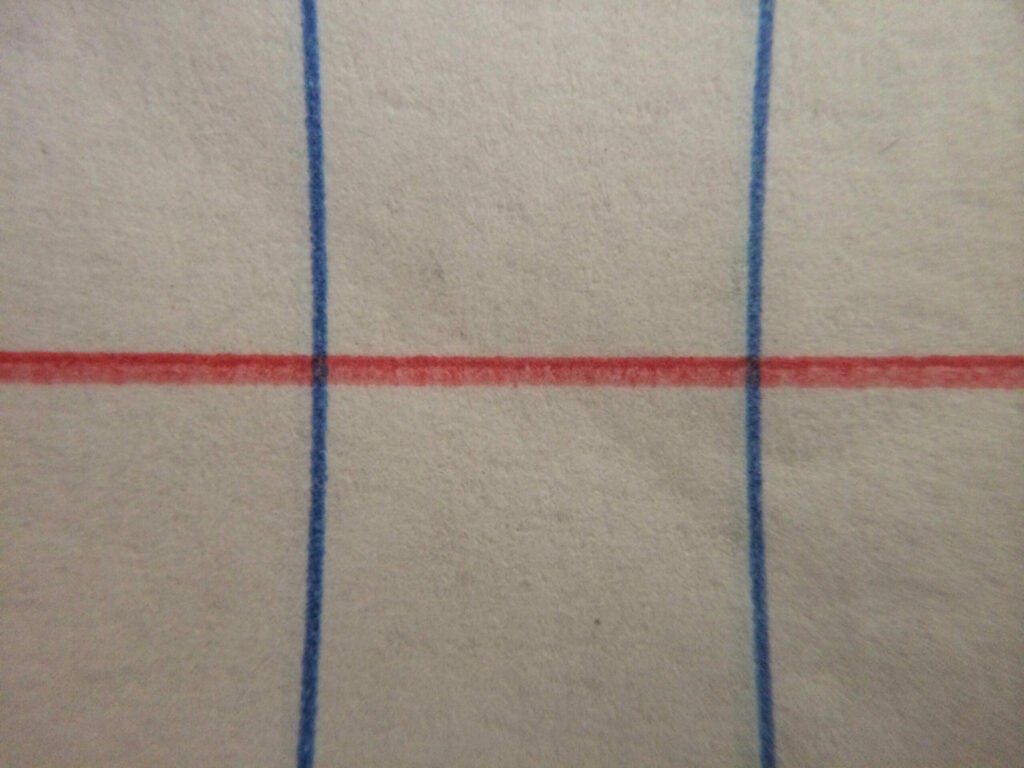 This is the middle optic. You can clearly see the distortion of the lines, which would likely benefit from some fixing in post. 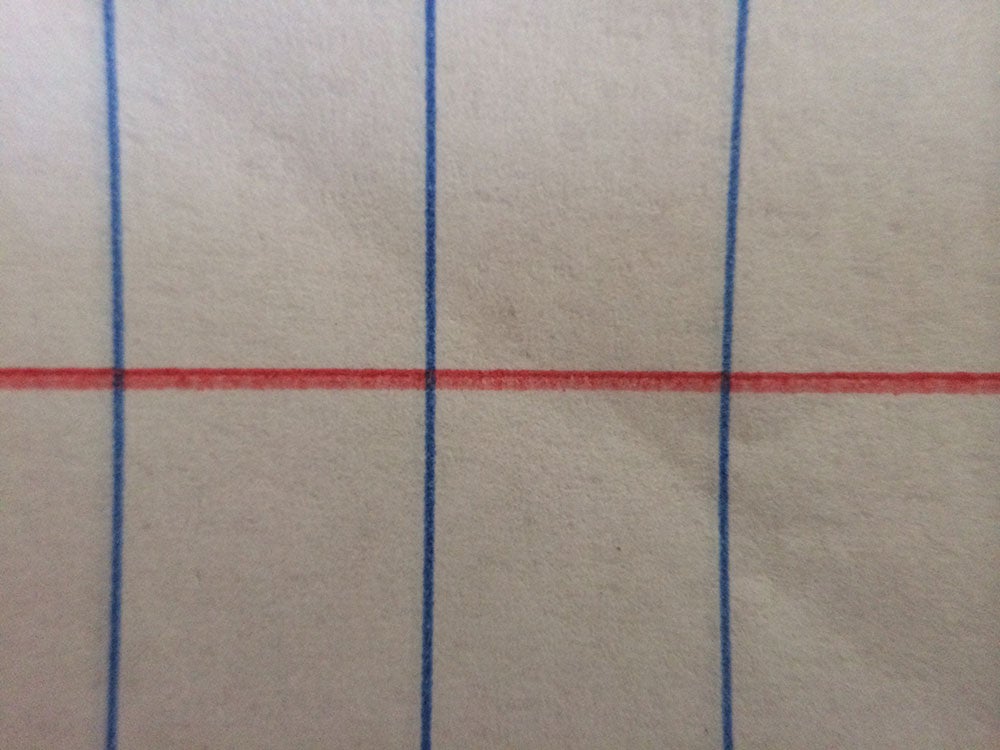 The least magnified optic lets in more of the scene, but it’s still a lot closer than the typical iPhone camera can get.
Stan Horaczek