Pentax scores big with its best DSLR yet 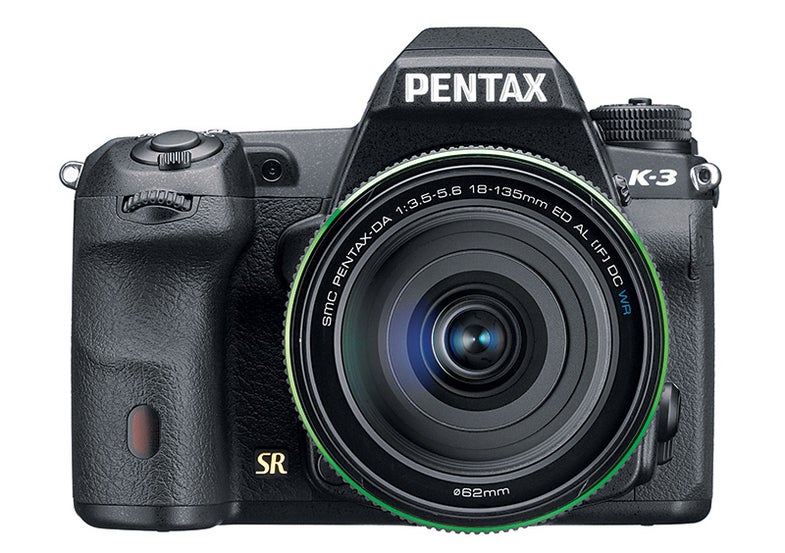 While the contrast-detection autofocus can work with continuous and tracking focus in live view, in video capture you're limited to autofocus­ing before the start of the clip.
SHARE

Any worries that the Pentax brand might suffer after its purchase by Ricoh can be put to rest. After this summer’s Pentax K-50, Ricoh has followed up with the more upscale 24.3MP K-3 ($1,297, street, body only). Its magnesium-alloy body, built on a stainless-steel chassis, has 92 seals to protect it from water and dust and is rated to function in subfreezing weather. Sensitivity stretches from ISO 100 through 51,200; it captures 14-bit RAW images in both Pentax’s PEF or Adobe’s DNG format; and its pentaprism viewfinder offers a 100%-accurate view with 0.95X magnification. Add a well-designed control system, and you’ve got one heck of an imaging machine.

In the Test Lab
The K-3’s large pixel count combines with an updated version of its Silkypix-based RAW converter. Along with a new 86,000-pixel metering sensor that tightened up the white balance, this powered the camera to an Excellent overall image quality rating in our tests from ISO 100 through 800. That’s one stop further than its predecessor, the K-5, managed when we tested it in 2011, and the K-3 did it with much more resolving power.

As many camera makers are doing these days, Pentax removed the anti-aliasing filter; these generally work by blurring the image slightly before it reaches the sensor. Instead, Pentax lets you get a similar effect by vibrating the sensor with the same mechanical system that shakes off dust. Pentax calls this most effective at shutter speeds of 1/1000 sec or slower; it’s not available in auto HDR mode or video capture. In our field testing, we did not see aliasing with the system turned on. In our lab tests, we left it off and saw some evidence of aliasing.

We were glad that Pentax now tailors its Silkypix noise reduction defaults to each ISO; it also gives numerical values for color and luminance NR, so you can adjust these in an informed way. But even at ISO 100, the K-3 did not achieve top honors in our test: It scored 1.4, at the top of our Very Low rating, and held this rating at ISO 200. But from there noise dropped to Low at ISO 400 and ISO 800, then deteriorated to Unacceptable at ISO 3200 and higher. (Nikon’s D7100 doesn’t reach Unacceptable until ISO 12,800.)

The K-3’s color accuracy essentially matched the K-5’s and the D7100’s, with an Excellent-level average Delta E of 7.2. In our autofocus speed test, the K-3 did particularly well in brighter light, beating the D7100 from EV 12 through EV 4, but slowing some at in lower light—still a great showing. And though our test measures down only to EV –2, Pentax rates the system as effective down to EV –3. Given that it took an average of 1.41 sec to lock focus and snap an image at EV –2 in our test, we wouldn’t expect fast AF in less light. But in an age when ever fewer cameras focus below EV –1, it’s refreshing to see a company take this tack.

In the Field
As usual for its top-of-the line DSLR, Pentax has made a very comfortable, rugged camera body. The grip has a deep cutout for your middle finger, providing ample leverage even when using larger lenses, such as the Pentax 60–250mm f/4 we used to capture the New York City Marathon.

The K-3’s shooting-mode dial can be locked. A pair of command wheels affords easy control of aperture and shutter speed in manual mode, and various buttons can be assigned to tasks of your choice. A switch lets you move between still and video capture, while a dedicated button toggles between live view and the optical finder for stills. The Info button brings you to a dashboard-style control panel on the LCD, where you can change 18 different settings. Using the K-3 proved very intuitive, and we were never flummoxed by it in field use.

Though the K-3 doesn’t have built-in Wi-Fi, Pentax will offer a special SD card, called a FLU card, for remote image transfer and camera control. We did not get one in time for our field test.

Video results were pleasing. The K-3 captures at up to 1920×1080 pixels at up to 60i using the H.264 standard for encoding. We saw little in the way of video artifacts.

Burst shooters should be happy with the drive speed of 8.3 frames per second. That’s fast enough to handle almost any sport and, in our trials at the marathon, the continuous AF did well at tracking as runners approached the camera and then rounded a corner.

The auto HDR mode lets you choose from three levels of effect, and it can compensate for slight camera movement in between shots, though it’s always best to use a tripod for shooting HDR.

The Bottom Line
Pentax has priced this flagship DSLR close to midlevel bodies from Canon and Nikon. Between the K-3 and Nikon’s D7100, it’s hard to pick a winner. The K-3 is more rugged and offers more weather-sealing; it also has image stabilization that will work with any lens you mount on the camera (we even used it with a screw-mount lens made when the company was still Asahi Optical Corp.). But the Nikon has slightly better AF tracking—we did see a few less-than-sharp images in our marathon images—and better noise control, especially at lower sensitivities.

Versus Canon’s EOS 70D, this Pentax delivers more resolving power, but lacks the 70D’s articulating LCD screen, and it can’t hold a candle to the Canon’s video AF.

But, if your primary interest is still photography, the K-3 offers a fine rugged body, can accept a vast array of lenses (and image-stabilize all of them) and represents the best shooting experience we’ve had yet from a Pentax DSLR.