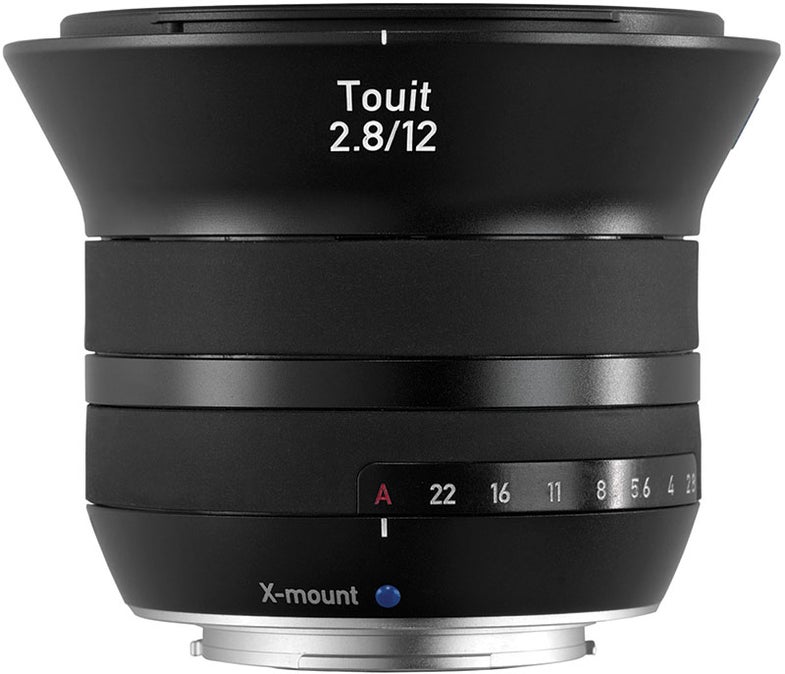 This Zeiss Touit Distagon T* 12mm f/2.8 ($1,250, street) is one of the widest-angle ILC lenses in production, capturing a field of view comparable to a full-frame 18mm. It’s one of two current autofocusing Touit lenses in the E- and X-mounts for the Sony NEX and Fujifilm X-series interchangeable-lens compact cameras, both with APS-C formats.

In the hands, this Touit lens is very light and compact. Bayonetted into place, it looks great on our Fujifilm X-series test bodies. The focusing ring is generously sized—almost a half-inch wide—with an ample 100-degree turn for fine focusing. Compared to the only similar ultrawide we’ve tested—the APS-C Pentax DA 14mm f/2.8—the Touit is lighter by nearly 8 ounces and shorter by about ¼ inch.

From a physical standpoint, the lens prompted several of the same gripes we had of the physically similar and recently tested 32mm f/1.8 Zeiss Touit. The aperture and manual focus rings, for example, are too close together, and we often changed both aperture and manual focus when we wanted only the latter. A locking option for the aperture ring’s “A” setting would have solved this. It’s not something that Sony NEX shooters need to worry about, however, because their version has no aperture ring—the camera controls aperture. The Touit’s outer rim flares out far enough to cast a shadow across a third of the frame when used at close- to mid-range focusing distances with the Fujifilm’s X-E1’s built-in flash.

In the field, autofocusing seemed faster, quieter (though not silent), and somewhat less apt to hunt than we remember of the Zeiss 32mm f/1.8 Touit. The 12mm had no trouble quickly finding sharp focus, and was, in general, a delight to use.

In optical tests in our lab, this 12mm’s most remarkable feat was controlling distortion to an Imperceptible-range pincushioning (0.04%) in our DxO Analyzer 5.0 tests. Is there an ultrawide that’s more distortion-free? Not that we can recall. The Pentax 14mm for DSLRs showed 0.30% Slight-range pincushion distortion, which we lauded at the time in no uncertain terms.

As for sharpness, the new Touit turned in Excellent-range, low-90th percentile SQF scores, similar to the Pentax—both commendable performances.

Since we tested only the X-mount version, we can only speculate as to the Zeiss Touit 12mm’s capabilities on the Sony NEX platform. We can say, however, that we imagine both Fujifilm X and Sony NEX shooters are certain to be well-served by this agreeable ultrawide, especially if speed and distortion-free shooting are high on their Must-Have lists.