Tokina fills out the focal length of a popular favorite 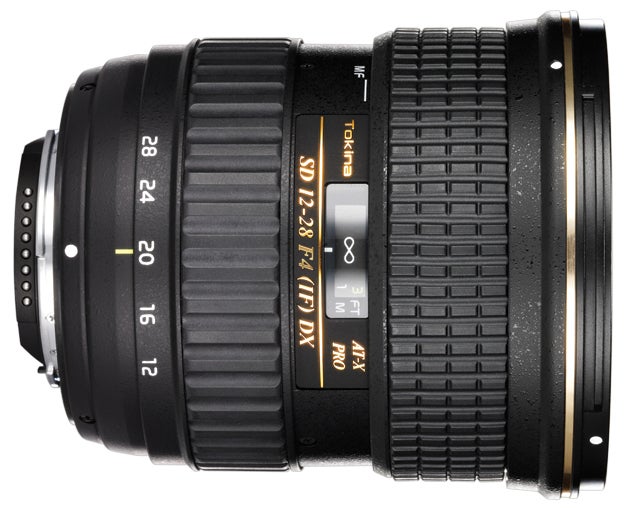 Tokina's signature push/pull collar switch that quickly toggles between manual- and autofocus is now even more convenient, thanks to improved markings. For $599, we consider this lens one of the year's best buys. Satoshi
SHARE

The successor to Tokina’s hard-to-keep-in-stock 12–24mm f/4 PRO DX II of 2003, the newcomer boosts the focal-length range—our Nikon-mount test lens is the full-frame equivalent of an 18–42mm; for Canon it would be about 19–45mm. It also has a new autofocus motor and sensor, plus two aspheric elements and one element of super low-dispersion SD glass.

Dimensionally, the lens is similar to its progenitor, though almost two ounces lighter—noteworthy, given its longer reach. Average in size for the class, the lens is long enough to cast a shadow in images made at wider focal lengths when we used our Nikon D300’s onboard flash. Despite the newly designed SD-M (Silent Drive-Module) AF motor, autofocusing—while quiet—is not the quietest we’ve used lately. It did, however, focus very quickly, probably because of the its new focus control system, which benefits from a sensor being moved closer to the drive motor for faster communication.

On our optical bench, the Tokina put up uniformly Excellent-range SQF numbers, and in our DxO Analyzer 5.0 distortion tests, it significantly topped the scores of the earlier 12–24mm f/4 (0.32% barrel distortion compared with 1.22% barreling at 12mm, for example.) The Imperceptible-range pincushion distortion at 20 and 28mm and near absence of edge falloff were remarkable.

Like the 12–24mm f/4 before it, the optical superiority and pricing make this wide-angle almost irresistable. (It’s $500 less than Nikon’s 12–24mm f/4 DX zoom. but offers more reach, superior distortion control, and greater subject magnification, for example.) Speaking of subject magnification: The Tokina’s is best-in-class, allowing for dramatic close-ups with tons of background detail. On the fence? See our eight-page ode to f/4 zooms (“Constant Companion”) in last month’s issue. It may just win you over.