Fujifilm’s entry-level ILC drops the finder and the price 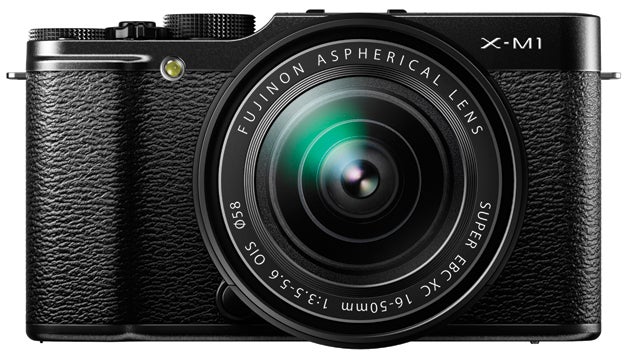 Despite its goal to make the smallest X-series camera body to date, Fujifilm kept the same battery as the X-E1, so you can expect enough power for about 350 shots before needing a recharge.
SHARE

In the span of just a few years, Fujifilm has built an impressive series of interchangeable-lens compact (ILC) cameras. The pricey X-Pro1 followed on the success of the X100 and would have been enough to make a lot of people happy, if somewhat less wealthy. Then came the X-E1, which translated much of what people loved about the X-Pro1 into a more affordable body.

Now comes the X-M1. Ditching the electronic viewfinders found in the prior two X-series ILCs, the X-M1 breaks even more ground in price-cutting, streeting for $699, body only, or $799 with 16–50mm f/3.5–5.6 O.I.S. kit lens. At the same time, by relying on the same 16.3MP X-Trans imaging sensor as the X-E1, the new camera offers the same high level of imaging and lets photographers use the same great X-mount lenses that helped establish Fujifilm’s system as a major force (Not to mention third-party lenses, such as the fabulous Touit lenses Carl Zeiss recently introduced).

But will all that great glass help you get great images? We gave the X-M1 the once over in the Popular Photography Test Lab and out in the field to find out.

In the Test Lab
At the heart of the Fujifilm X-M1 is the same X-Trans sensor found in the X-E1. While based on the same CMOS technology used to capture images in almost all DSLRs and ILCs, the X-Trans sensor does its imaging in a different way than the Bayer-array sensors in most cameras. The X-Trans uses a more complex array of red, green, and blue filters than the Bayer to generate color information while purporting to minimize aliasing. Hence, this sensor does not have an anti-aliasing filter to prevent artifacts, such as moiré patterns.

Our tests show that, for the most part, this approach works. Our resolution test images still showed some aliasing, but shots from field testing didn’t show any prominent artifacts that could be attributed to a lack of the aliasing filter.

As did the X-E1 before it, the Fujifilm X-M1 earned an Extremely High rating in overall image quality at ISO 100 and 200. Color accuracy measured an average Delta E of 6.8, for an Excellent rating. So, even though the new filter array doesn’t benefit from the many years of refinement that the Bayer array has had, you can still expect remarkably accurate colors. (As always, we recommend setting white balance from a gray card to ensure the most accurate color.)

In our resolution test, the X-M1 turned in 2370 lines per picture height at ISO 200. (Though the camera offers ISO 100, you can capture at this sensitivity only when shooting JPEGs. Since our standard procedure is to test RAW images converted to TIFF, we’re reporting resolution at the lowest sensitivity at which you can capture RAW. Furthermore, the ISO 100 JPEG we captured for this test ended up with about 100 fewer lines per picture height.)

Like most manufacturers that ship a version of Silkypix software for RAW conversion, Fujifilm doesn’t apply much noise reduction in the default settings. No change is made to the basic noise-reduction settings until ISO 1600. From there through ISO 6400 a modest 20 points of noise reduction is applied. This makes for test results that look noisier than expected. We suspect that Fujifilm does this to eke out as much resolving power as possible—a noble goal, but we also wish the company could see fit to include a better RAW conversion option, such as Adobe’s Photoshop Lightroom.

That said, the camera kept noise to a Low or better rating at it ISO 100 and 200 and didn’t reach an Unacceptable rating until ISO 3200. Beyond that, noise never reached a very extreme level, so if you’re not picky, you may not have a big problem with the X-M1’s noise. We expect that, with some moderate fiddling with noise reduction during RAW conversion, you can achieve a very pleasing balance of high detail and well-controlled noise.

In the Field
With a design that suggests the style of a rangefinder, and a size small enough to stuff into nearly any bag larger than a clutch purse, the X-M1 won’t give you an excuse to leave it at home.

That small size, though, does present some design challenges. The grip is of the barely-there variety, consisting of a slight protrusion from the front of the right-hand side of the body. If you want a beefier protrusion, Fujifilm offers the HG-XM1 accessory grip ($90, street), which screws into the camera’s tripod socket. Not only does this give you a much better handle, it also has its own tripod socket that ends up more centered under the lens than the built-in tripod threads.

Despite limited real estate, the X-M1 still has a fair number of buttons for dedicated access to certain essential camera functions. The direction buttons that let you navigate the menus double as access to settings for autofocus, white balance, macro mode, and drive mode. A pair of command wheels—one on the top of the camera and the other mounted upwards on the camera back—make it easier to set aperture and shutter speed in manual shooting.

Among the charms of this Fujifilm system are the lenses that have a ring to set aperture. With these, you can use your left hand to set the f-stop, freeing your right hand to set shutter speed; in aperture-priority auto mode, you can just take care of the shutter release and any incidental setting changes.

A tiny assignable function button to the right of the shutter release can provide access to any of 15 different functions. Since there’s no other button dedicated to ISO, we assigned that function to this control for nearly all of our field testing.

A small pop-up flash tucks away into the left side of the top of the camera and is useful in a pinch if you need a little bit of fill for harshly lit subjects. If you need more light, the X-M1 sports a hot shoe that will accept one of Fujifilm’s accessory flashes or any manual flash that fits a standard ISO shoe.

Video shooters will appreciate the X-M1’s ability to capture at up to 1920×1080 pixels at 30 fps, although you’ll be limited to a maximum clip length of 14 minutes. Stepping down to 1280×720 at 30 fps, you can capture up to 27 minutes before the camera cuts you off. The footage we shot looked nice, with minimal artifacts, well-saturated colors, and plenty of detail. There is no microphone input, though, so you’ll have to accept the sound from the built-in stereo mics or use a separate audio rig like a big-time movie director.

We won’t lie: We did miss having a viewfinder while shooting with the X-M1. There’s something about shooting with this style of a body that makes us want to hold the camera at eye level and pretend we’re Henri Cartier-Bresson or Garry Winogrand. Once we gave the camera a chance and began to use the tilting, 3-inch, 920,000-dot LCD to frame our shots, however, some of our ingrained misgivings melted away. Unlike some monitors, the X-M1’s tilts a full 90 degrees downward or upward, which made holding the camera overhead (as some short-statured photographers often like to) much more comfortable. Waist-level shooting was just as convenient.

The best measure of a field test is the assortment of images that you can capture. By this measure the X-M1 deserves a lot of respect. Autofocusing was speedy with the 16–50mm f/3.5–5.6 kit lens and other Fujifilm glass. Zeiss’s Touit lenses proved a tad slower and louder, but didn’t pose a problem when outdoors. They might tip off a subject, though, if you’re trying to capture candid shots in a quiet environment.

The Bottom Line
The Fujifilm X-M1 captures images with a lot of detail and very pleasing colors, and it does so with a body that is significantly smaller than a DSLR. While it might not deliver the most resolution that you can get in an interchangeable-lens camera, it’s enough for the needs of the vast majority of shooters. Though this camera does have its quirks (again, no RAW at ISO 100, 12,800, or 25,600), they won’t pose problems for most shooters, especially if you’re primarily capturing JPEGs. If you’re looking for an affordable way to enter Fujifilm’s system, the X-M1 is a great way to get in.