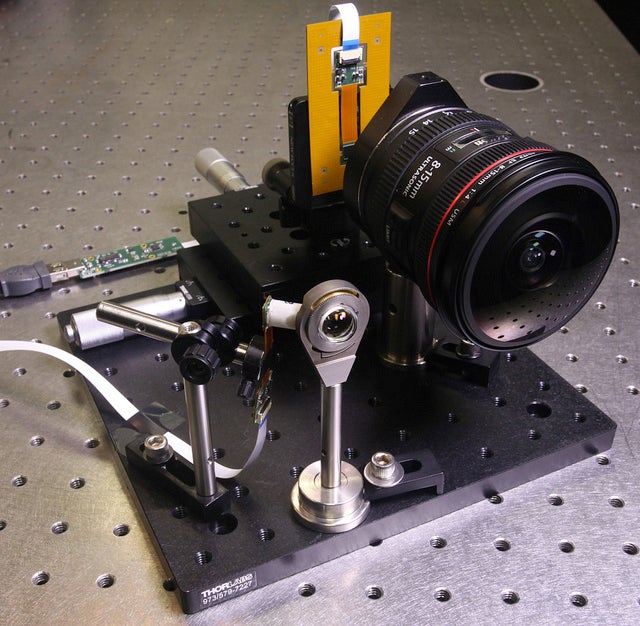 Researchers at the UCSD Jacobs School of Engineering are creating a totally new take on a wide-angle lens, one that’s small enough to fit on a smartphone, but has the optical potential to rival anything you strap to an SLR.

The prototype device, shown above next to a Canon 8-15 mm fisheye lens, has a 12mm focal length. The breakthrough in this technology is twofold. Firstly, the system uses perfectly spherical monocentric lenses made of concentric glass shells. Their spherical shape promises sharper and less prone to distortion than traditional wide-angle designs. And in order to get the light from these spherical lenses to hit the sensor properly, the researchers used “a dense array of glass optical fiber bundles that are polished to a concave curve on one side so that they perfectly align with the lens’ surface.”

In the image below, you can see the prototype compared to standard wide-angle lens, both shooting onto identical 5MP sensors — and the image is sharper, less distorted, and with less chromatic aberration.

The 5-megapixel version is just the start, with a 30-megapixel currently in the works. And beyond that? Project leader Joseph Ford said “Next year, we’ll build an 85-megapixel imager with a 120-degree field of view, more than a dozen sensors, and an F/2 lens – all in a volume roughly the size of a walnut.”