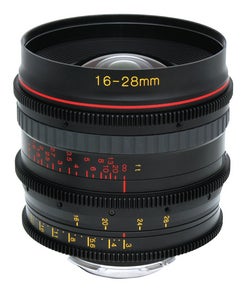 The number of cine lenses on the market has been on the rise since DSLRs got into the video game. Now Tokina has also gotten on board, with a wide-angle cine lens announced on its Japanese site. With an asking price of ¥580,000 (around $5,870), it’s due in a PL mount version later in September, and come November in an EF mount.

According to DPReview, it’s a modified version of the substantially more affordable AT-X 16-28mm f/2.8 Pro FX, with manual focus, and redesigned focus, zoom, and aperture controls to be more appropriate for use with a cinema camera.

It’s not clear how this lens is different from the non-cine version, especially with such a large price discrepancy. We presume there is something there to recommend it beyond a new exterior.