Fujifilm builds out its zoom catalog 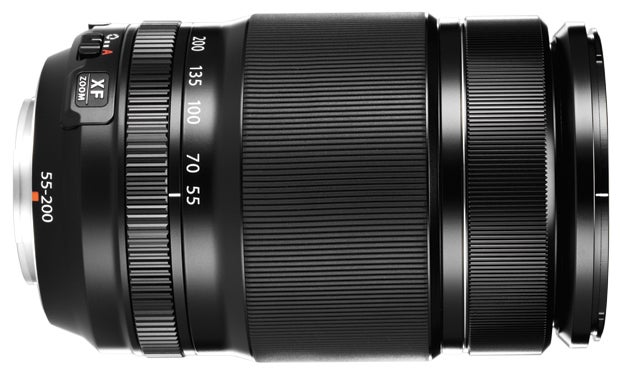 By APS-C standards, this XF lens is quite large. Canon's comparable 55–250mm f/4–5.6 EF-S IS, for example, is shorter by more than an inch and lighter by almost half a pound. And it reaches 250mm!. Satoshi
SHARE

An 84–305mm full frame equivalent, the 55–200mm f/3.5–4.8 includes a built-in stabilizer, two ED and one Super ED elements for controlling chromatic aberration, and has a unique soft-sided lens pouch that doubles as a cleaning cloth.

Cosmetically, the 55–200mm is strikingly plain-Jane, with no subject distance scale, ornamental brand markings, or even f-stop numerals on its aperture ring (they appear on the LCD screen). It does, however, sport a unique auto/manual aperture switch that’s actually quite convenient.

In the field, the lens balanced awkwardly on our X-E1, espe-cially racked out to 200mm. Autofocus was wonderfully fast and very quiet, but manual focus, of the electronic sort, was compromised by a too-long turning radius (230 degrees) and no hard stop at either end.

In the Popular Photography optics lab, the lens put up Excellent-range SQF numbers, with sharpness and contrast slightly below that of comparable Canon, Sigma, and Sony APS-C zooms. In DxO Analyzer Version 5.0 tests of distortion control, however, the lens performed spectacularly, presenting the most impressive distortion control of any recently tested zoom. The same for edge falloff: none. Another bonus: the additional 3.3 stops of sharp handholding made possible by the on-board image stabilization system (OIS).

As Fujifilm’s only current XF tele zoom, this favorably-priced, optically excellent lens, while a little unwieldy, is almost a must-own optic for most X cam shooters. By the way, Fujifilm has announced a pending X-camera firmware upgrade that promises to significantly boost the already fast focusing speeds. Yes, defin-itely must-own.