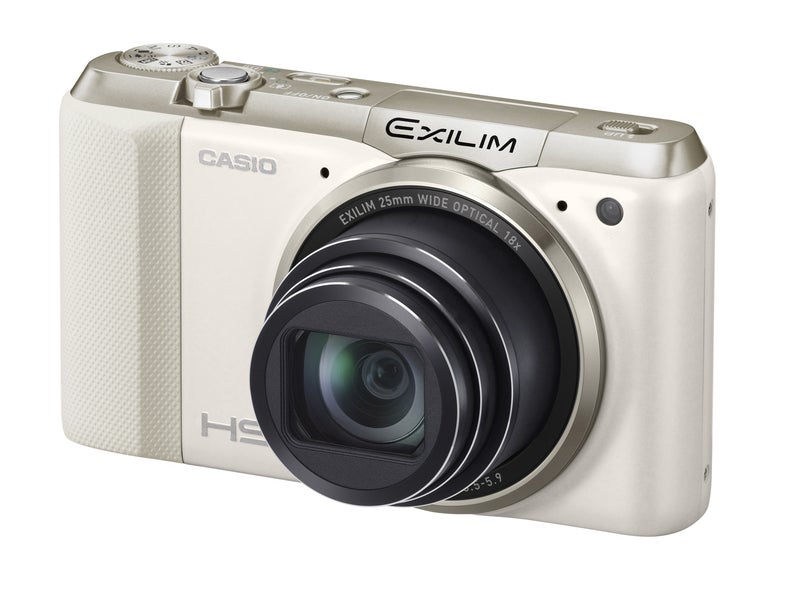 In Europe and Japan, Casio has announced a new compact zoom camera, which has drawn some attention for its impressive sounding image stabilization system, as well as packing Raw shooting, and a rather decent zoom.

The Casio Exilim EX-ZR800 features an 18x, 25-400mm, f/3.5 – F5.9 lens. The new stabilization system runs on five-axes of movement (pitch, yaw, vertical shift, horizontal shift and roll), which Casio bills as giving two stops of stabilization. The company also claims that when combined with “high – speed burst images”, you can get five stops of stabilization.

The new Casio also features Raw shooting, something unusual in this type of consumer-oriented camera.

There are the usual panoply of scene modes, burst modes, HDR, panoramas and more — none of which are hugely exciting.

The EX-ZR800 hasn’t been announced in the USA yet, and we’re not sure if it’ll ever come to these shores. But it’s currently pegged for a price of 40,000 yen in Japan (around $400), and will launch later this month.

With the aim of providing digital cameras that enable people to capture fleeting moments with beautiful images, Casio has been pursuing the full potential of the compact digital camera using its original high – speed technologies. This effort is based on the company’s “Triple Zero” development objective, which seeks to minimize and eliminate shutter lag, out-of-focus shots, and image blurring due to camera shake.

The new EX-ZR800 uses highly advanced image stabilization technology to virtually eliminate the impact of camera shake , a common problem which has been the cause of many a ruined photograph.

The new camera also features other enhanced shooting functions. This is the first EXILIM to have a Time Lapse function that allows users to capture the movement of clouds in the sky, or people and cars at an intersection, showing long-time movement sped up. Casio has added a new “sparkling shot” filter effect to ART Shot, which lets users create original artistic photos and movies. These functions make it easy to take creative shots without changing lenses or making complicated settings.

Main Features of the EX-ZR800

The new cameras are equipped with EXILIM Engine HS Ver. 3 driven by a dual-CPU, two parallel image processors , a reconfigurable processor and a vector graphics core. The reconfigurable processor delivers functional and performance flexibility plus high-speed processing based on the latest technologies from Casio, while the vector graphics core smoothly produces two – dimensional images . In addition to high – speed shooting response,*4 the new models feature an intuitive display screen that is easy to view, thanks to its high – quality gra phic user interface.

The EX-ZR800 is equipped with a wide – angle 25 mm, 18x optical zoom lens. The zoom maintains super resolution image quality to a maximum zoom of 36x, thanks to Multi Frame SR Zoom technology.

Camera shake which occurs in the five axes*5 of pitch, yaw, vertical shift, horizontal shift and roll is precisely corrected. Casio has employed an optical lens that achieves stabilization equivalent to approximately 2 stops*6 slower in terms of shutter speed. Bringing this effect together with combined high – speed burst images results in image stabilization equivalent to about 5 stops slower*5 in terms of shutter speed. This allows users to minimize blur while holding the camera to take pictures, which can easily result in camera shake, even for shots of night scenes and when zooming. (Results may vary depending on the shooting environment and camera settings). In addition, the EX-ZR800 employs a lens-shift optical lens, which further reduces image blur on the LCD screen when recording movies or holding the camera.

The new Time Lapse feature allows users to capture the slow movement of clouds in the sky, or of people and cars on a street, and then show long-time movement sped up. The capture interval and time for clouds, night views, vehicles, street scenes and so on are preset, so all the user has to do is simply select the scene to shoot to get the optimum setting. Of course, users can also adjust the settings manually.

The new cameras feature Triple Shot, which combines high-speed burst shooting with high-speed response for worry-free photography. The feature not only takes an image when the shutter button is pressed, but also captures images immediately before and after. As a result, Triple Shot enables users to capture decisive moments with quickly moving subjects such as children and pets.

The new model also features an inset display on part of the LCD screen to show images just taken. This feature is convenient for photographing children because it allows users to check each shot, while responsively ta king more pictures. Users can select from two different inset display screens.

Casio has accelerated the frame rate in the auto focus (AF) mode and optimized the camera’s lens drive control, image sensor control and AF algorithm for parallel processing of AF operations and high-speed continuous shooting. Built into the EX-ZR800, this makes it possible to achieve AF-CS up to 30 frames and as fast as five frames-per-second, which makes it possible to take clear photos of moving subjects such as children and pets.

The EX-ZR800 comes with All-In-Focus Macro, which selects only in-focus areas from continuously shot images at different focus settings to produce a composite image. This achieves photos with every area coming out in focus, from foreground subjects to far-away backgrounds, which are hard to produce using a conventional camera. Also, Casio has employed its high-speed continuous shooting technologies to create Blurred Background, an original technique for processing the background scene of a shot like the soft blur effect attainable using a single-lens reflex camera, thereby accentuating the subject of the photo. Users can select from three different processing levels of blur effects to set the background focus just as they wish.

The Premium Auto Pro function automatically analyzes the shooting scene to choose the best settings and perform image processing. It automatically combines images from high-speed burst shooting according to shooting conditions to create gorgeous photos. Users can easily take sophisticated photos at the press of the shutter button, thanks to the automatic activation of functions such as HDR technology, which combines photos of differing exposures to handle high-contrast conditions, as well as High Speed Night Scene mode for night shots and High Speed Anti Shake for high-power zoom shooting, both of which combine highly sensitive, continuously shot images, taken with camera shake kept at a minimum, to reduce noise in the resulting image. For movies, the Premium Auto M ovie function automatically analyzes the scene to choose the best settings.

HDR technology faithfully reproduces images as they really appear, avoiding under- or over-exposure

The new model also uses HDR technology developed by Casio to allow each press of the shutter button to take several shots at different exposures and then instantly combine them into a single image with a high dynamic range. This minimizes over- exposed or under-exposed areas in the image, creating a photo that captures all the rich tonal gradation of the scene just as it appears in real life.

With HS Night Shot, the EX-ZR800 detects shooting conditions and conducts high-speed burst shooting of numerous frames determined automatically with a level of light sensitivity as high as ISO 25600. High-precision positioning alignment technology suppresses any low-frequency camera shake that may not be completely eliminated by the optical Anti Shake correction function. The company’s latest image-processing technology also completely removes low-frequency color noise, which has typically been very difficult for cameras to eliminate. These technologies work together to produce beautiful photos with minimal blur, even in low-light conditions.

Users can create artistic photos using the HDR – ART function, which combines continuous shots with differing exposures while performing advanced analysis to locally c hange the intensity of contrast and color saturation. Users can now choose from a total of five different processing levels of art effects to enjoy creating more freely expressive images. Additionally, to creat e the artistic photos of the user’s preference using Art Shot, new “sparkling shot” filter effect has been added to eight different filter effect s previously available: toy camera, soft focus, light tone, pop art, sepia, monochrome, miniature and fisheye. Users can select from three different color and processing levels for each filter (select an area from six patterns for miniature) , and can view the effect on the display and adjust the result prior to actually taking a picture. Even better, all of these filters except “sparkling shot” can be used for shooting movies, too. The HDR – ART function simultaneously saves both the HDR – ART image and the standard photo with a single press of the shutter button.

The Slide Panorama function detects moving subjects and faces and adjusts them appropriately as the camera is moved, allowing users to create more natural-looking panoramic images just by panning the camera across a scene.

The camera is fitted with a mode dial that lets users quickly choose from several shooting modes.

*1. When optical image stabilization and technology for combining high-speed burst images are used together. Based on a Casio survey .

*2 When converted to 35mm film format

*4 Start-up time of 1.3 seconds, high-speed auto focus time of 0.18 seconds, shutter response of only 0.016 seconds, and a capture interval of as short as 0.26 seconds. These times are CIPA standard compliant

*5. When optical image stabilization and technology for combining high-speed burst images are used together, Based on a Casio survey .