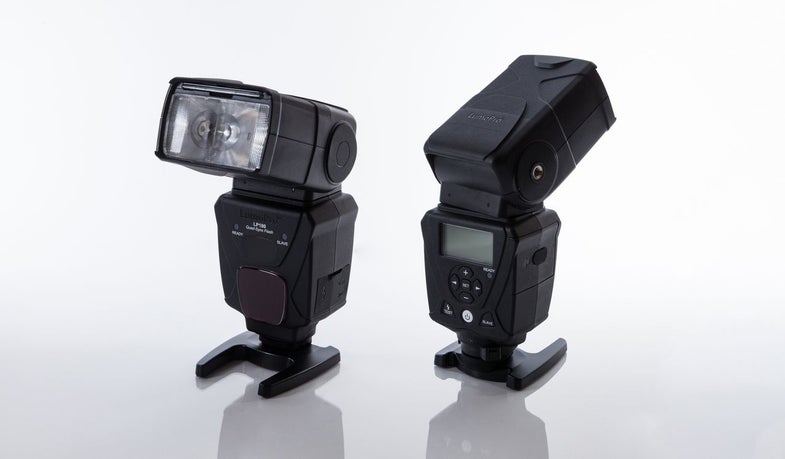 I was first introduced to the company by David Hobby‘s posts about the LP160 unit. I still own two of them and keep them as part of my regular go-kit for skateboarding and portraits. Now, the company has announced their new LP180 upgrade, and it has a lot of advantages, even over its predecessor.

For starters, power adjustments can now be made in 1/3 stop increments. The LP-180 also features a completely redesigned outer housing that’s much more rugged than the LP160. To be fair, I’ve dropped one of the LP-160’s on two different occasions and it still fires like new, but the added security is welcome.

Like its predecessor, the LP-180’s hallmark is connectivity. Options include a 1/8″ microphone port, PC port, hot shoe or optical slave. The LP-180 also offers a high voltage battery port for increased recycle times. With ordinary AA batteries your looking at 4 seconds of recycle time at full power versus about 1 second at full power when using a high voltage power pack.

Other major improvements include a new user interface. The LP-180 is the first Lumopro to offer an LCD on the back, which we found to be extremely intuitive to use. The screen is also a very generous size in comparison to other name-brand flashes.

Make no mistake, this unit is completely redesigned both inside and out. Lumopro has switched to a smaller, quieter capacitor, a more robust system for avoiding over-heating as well as smaller flash head.

Other nice design tweaks include a spring loaded battery door that is now connected to the flash, a 1/4 20 mounting thread to throw the flash on a stand horizontally, and a special-designed gel slot, for painless color-correction. The flash even includes a set of gels to get you started.

Just to be clear, this is, of course, a completely manual flash, meaning no TTL. However, for $200, this unit might just be the perfect addition to your off-camera kit; heck I used it as my main on-camera flash for two weeks and had no qualms. Pre-order one here.