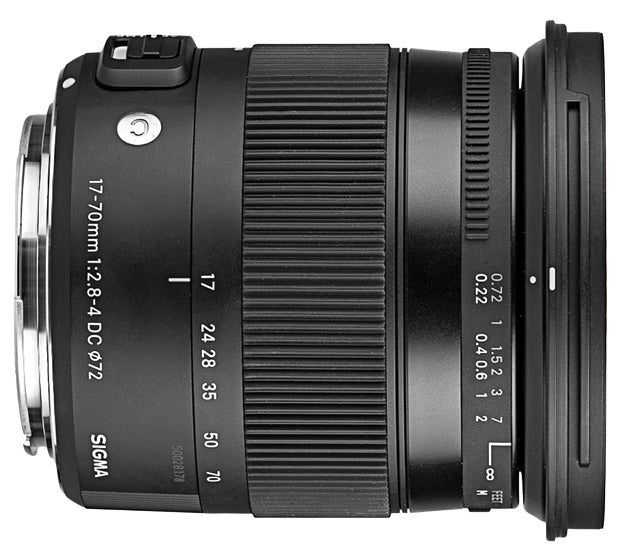 This, Sigma’s second stabilized 17–70mm, tops the original on several fronts. It uses a new composite plastic that Sigma claims is less prone to thermal expansion and contraction. It has one SLD and two FLD glass elements to reduce chromatic aberration. And it works with Sigma’s USB dock ($60, street) to update firmware and adjust the focus and zoom systems.

About 4 ounces lighter and, at 70mm, 0.33 inch shorter than its predecessor, this lens is still big enough to cast a shadow at its widest focal lengths and closest focusing distances when used with a pop-up flash. The filter ring does not rotate. Helpful markings include a subject-magnification scale and a white patch under the AF/MF switch that is visible when set to autofocus. But the gray distance scale for feet proved hard to read, and the hood’s black-on-black markings nearly impossible.

The zoom ring turns evenly and smoothly, but the focus ring feels slightly under-damped and its turning radius a bit too short for precision. AF, though, is fast, silent, and sure; it goes manual with a simple turn of the focus ring.

On our test lab’s optical bench, the lens logged Excellent-range SQF numbers for sharpness and contrast. As with SQF, our DxO Analyzer 5.0 tests for distortion found results strikingly similar to the earlier lens—except at 17mm, where barrel distortion was Visible at 0.56% (up from 0.49%). Macro focusing told a different story: The new lens achieved a laudable 0.02% Imperceptible pincushion distortion. Plus, vignetting control far outstrips that of the earlier lens.