Fujifilm X-Series shooters finally get a proper telephoto lens, and a raft of new glass is in the works 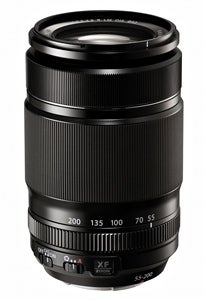 Fujifilm X-series is still something of a fledgeling in the camera world, so there isn’t exactly an abundance of lens options out there for it. But that number is set to balloon according to a new lens roadmap, starting with the freshly announced FUJINON XF55-200mm F3.5-4.8 R LM OIS for the X-Pro1 and X-E1.

The new lens is a 83-300mm equivalent, and Fujifilm claims the image stabilization system will enable you to shoot up to 4.5 stops slower than an unstabilized lens. The XF55-200mm features two linear motors for AF, two ED lens elements and one Super ED lens element, and proprietary HT-EBC coating on the entire lens surface. It has a minimal focusing distance of 1.1m, and a fully functional aperture ring.

This lens is part of a new push by Fujifilm to get more lenses out for the X-Series. The XF55-200mm marks the fifth lens available directly by Fujifilm, alongside two recently announced lenses from Zeiss. The newly updated roadmap has another five lenses scheduled by 2014, four from Fujifilm and one from Zeiss. Here’s how Fujifilm describes the new lenses:

In addition to a new lens and roadmap, Fujifilm is also releasing new firmware for the X-Pro1 and X-E1, which will be available in July of this year, and will “maximizes the benefit of the XF lenses and enables the cameras to search the contrast AF quickly throughout the full range of focal length. The focus speed will be as fast as 0.7 seconds even if it searches from infinity to MOD at the telephoto end.”