A long, stabilized Nikon zoom for much less 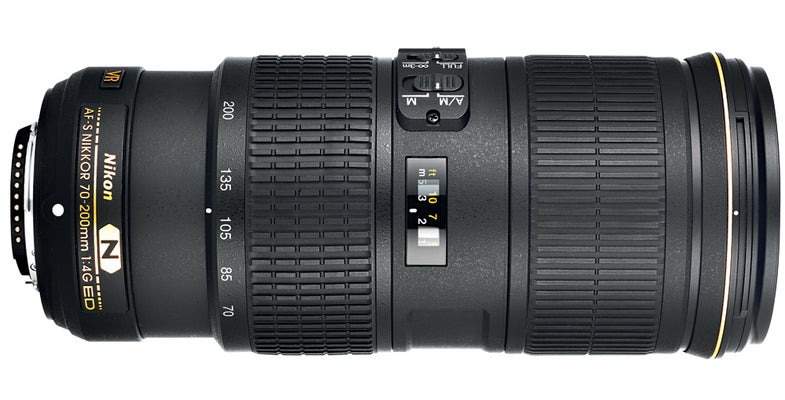 Besides switches for manual/autofocus and Vibration Reduction, this new Nikkor has a focus-limiter switch to prevent AF hunting at normal shooting distances. Brian Klutch
SHARE

Always on the lookout for exploitable market niches, both Nikon and Canon have been building out the middle of their lens catalogs with f/4 enthusiast versions of the expensive f/2.8 zooms favored by pro shooters. Lenses such as Nikon’s 16–35mm and 200–400mm f/4, and Canon’s 17–40mm, 24–70mm, and 70–200mm f/4 all share basic traits: They’re more compact, lighter, significantly less pricey, and (obviously) slower than their f/2.8 counterparts.

Nikon’s 70–200mm f/4G full–frame zoom ($1,397, street) is no different, with one exception: It’s the first Nikkor to include the third generation of Nikon’s Vibration Reduction system. Based on our tests, this could tempt some pros to choose this f/4 over the f/2.8 flagship glass.

Like the other f/4 zooms, this new one delivers many pro-caliber perks: great con-struction, weatherproofing, image stabilization, Nikon’s Nano Crystal lens coating, three elements of expensive ED glass, and the joys of fixed-aperture shooting. Its VR system also includes Nikon’s familiar Active/Normal switch, which adjusts for better shake resistance when shooting while walking or from a moving platform (Active) or standing still (Normal).

The lens feels rather hefty in the hands, but at 1.95 pounds is actually the lightest of five recently tested 70–200mm zooms. Its zoom and focusing collars are generously scaled, with nicely damped turns. The autofocus is adequately quick, absolutely quiet, and accurate on our test camera, the D4. A 105–300mm equivalent on Nikon DX bodies, the lens is attractively finished, but, unfortunately, has no depth-of-field scale or tripod collar.

On the optical bench in the Popular Photography Test Lab, it produced Excellent-range SQF numbers at 70mm and 135mm, then dipped to Very Good at 200mm. At 200mm, sharpness was considerably below that of the Canon 70–200mm f/4, especially at the extremes of the aperture range (at f/4 the Nikon scored 79.2% and Canon 93.1%).

Our DxO Analyzer Version 5.0 tests of distortion control showed Slight- to Visible-range distortion that was good for the class, though a level of magnitude below that of Nikon’s comparable f/2.8. At 70mm, for example, our test lens produced 0.18% barrel distortion compared with the f/2.8’s 0.09% Imperceptible-range barrel.

Rarely does it happen that our test results of stabilization systems match the performance promised by lens makers. But Nikon’s latest VR system is the exception. Two of our five testers were rewarded with the promised 5 extra stops of handheld sharpness with VR engaged. This is the first image-stabilization system to obtain 5 stops in our tests. (The average of all five testers was 3.75 stops.)

While the new version of VR may be this zoom’s crowning feature, its maximum subject magnification (1:3.25) is also among the best in class, and its compatibility with Nikon’s dedicated teleconverters can double the focal length at no cost to autofocus or VR.

Some photographers may be tempted by the Sigma 70­–200mm f/2.8 OS lens, which sells for about the same price as this f/4. The Sigma may be better in low light, with nicer bokeh, but its 2 extra stops of handholding don’t compare with the 5 you might get here.