Combine an enormous full-frame sensor and absurdly large pixels, and you have a recipe for seeing in almost pitch black 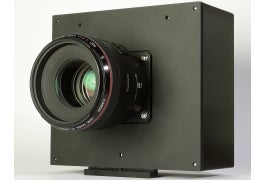 Canon’s newly announced video CMOS sensor does something incredibly impressive: by taking a full-frame, 35mm sensor, and using pixels significantly largert than even a high-end DSLR, the company has created a device that can see in even the most paltry of illuminations, and makes the full moon look like the light of day.

The new CMOS sensor has 19 micron pixels, which is 7.5 times the size of the pixels in the EOS-1D X. And larger pixels means more light gathered, in this case to an almost ludicrous extent. Using a prototype device, Canon released a video showing a man’s face illuminated by just a few sticks of incense, just 0.03 lux of illumination. The sensor was able to capture a stunning array of stars in the night sky, anything above an 8.5 magnitude, which is beyond what the human eye can see, and under the light of a full moon.

A quick back of the envelope calculation suggests that with pixels that large, the sensor is probably designed for 1920×1080 footage, so while it might not be suitable for print photography, for low light films and video it would be astonishing. Canon will be showing the sensor at Security Show 2013 in Tokyo, with the aims of developing it for “astronomical and natural observation, support for medical research, and use in surveillance and security equipment”, but hopefully it’ll come into use for more artistic purposes, too.